It's a Hawk Eat Squirrel World Out There 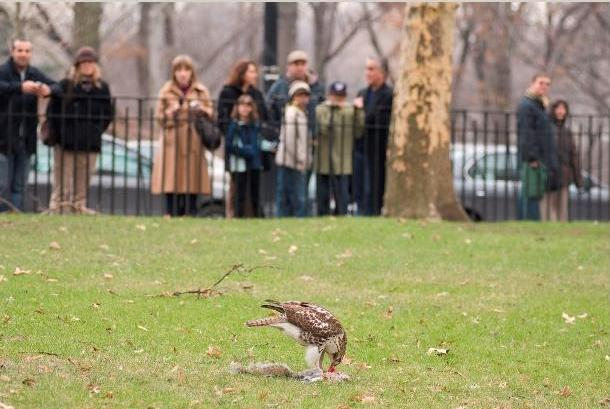 Gothamist reader luzer took some arresting, very "Wild Kingdom"-like photographs of a hawk snacking on a squirrel in Central Park, near the American Museum of Natural History. luzer posted photographs on Flickr and writes that some of the humans who gathered to watch the spectacle "guessed it was Pale Male. I am not convinced (we saw another one later in the park)."

While New York is very urban, there are still many places where you can see some wilderness. Here's a list of the Parks Department's 48 Forever Wild Nature Preserves, which total over "8,700 acres of towering forests, vibrant wetlands, and expansive meadows" and include "flying squirrels, bald eagles, and fascinating rare plants." Flying squirrels!

And this weekend, there's an early birding event at Marine Park, Winter Eagle Watch in Inwood Park, and Owls on the Prowl at the Blue Heron Park Preserve.