It's 2016, And Bon Iver Is Louder And More Captivating Than Ever

The lights dimmed and three thousand people held their breath as the newly-remade Bon Iver took the stage at Brooklyn's King's Theater Tuesday night. The suspense was brutal: here was the universally-beloved Justin Vernon back from a five-year hiatus, performing a weird new album in a lavish theater for fans who'd managed to score the hottest seats in town (there were ten New York Bon Iver shows this month, and each one sold out in minutes). How could it be done? How could the experimental, jagged bits that make up 22, A Million—the cracked vocals, digital beats, scaly basslines, and cavernous echoes—possibly work in a live setting? What were six saxophonists doing on stage? Where'd those acoustic guitars go?

Bon Iver fans have been through a lot. When Vernon appeared in 2007 he was the sincere, haunted woodsman behind For Emma, Forever Ago, an album of heartbreaking wintry folk songs written in a Wisconsin hunting cabin. For millennials of a certain age, Emma defined early adulthood. It was a refuge during moments of pain, confusion, and fear. Vernon traveled the world for years supporting the record and became our vulnerable god, howling in a broken falsetto so loud and so pure that all life's troubles retreated back. Bon Iver seemed on a path toward the same precious folk mantle that holds up Nick Drake, Joni Mitchell, Elliott Smith, and Sufjan Stevens.

But instead, things got strange. In the years following For Emma, Vernon formed a math-rock band, sat in with a trip-hop collective, and helped Kanye West make the best record of his career. Our new sincere king seemed hell-bent on running as far away as possible from the sound that had made him famous. Then, in 2011, Bon Iver, Bon Iver arrived, and it was clear that everything had changed.

On that second, self-titled album, Vernon revealed himself as a much more brilliant and complicated musician. Bon Iver had everything, from booming double kick drums to feather-soft piano, straight-ahead rock riffs, and a blissed-out 80s finale. It transformed Bon Iver into a nine-piece band. It led to a yearlong world tour, won two Grammys, and, perhaps most importantly, freed Vernon from his own creation myth. With a bold, expansive new sound, Bon Iver could seemingly do anything. Then, once again, Vernon shelved it. 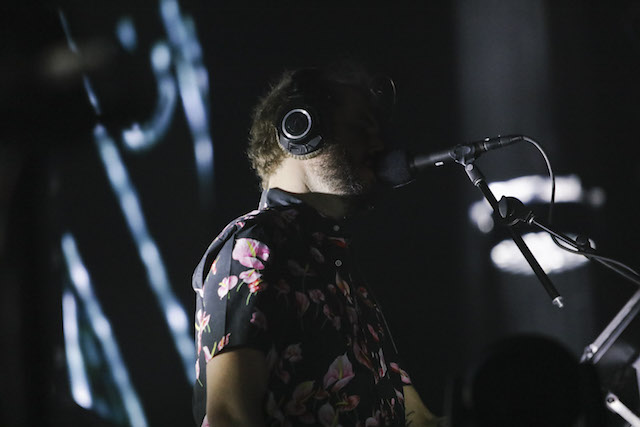 Thus the pressure Tuesday night at King's Theater. Bon Iver's set opened with the dopplered vocals of "22 (OVER S∞∞N)," the gorgeous first track on 22, A Million that hinges upon the question "Where you gonna look for confirmation?" The vocal loops returned on "33 GOD," another new song that grows into a banger with each passing beat. Drummers Matt McCaughan and Sean Carey thundered across their kits while Vernon's melodies floated on keyboard choirs, every note sounding glorified. Later, on the rattling "10 d E A T h b R E a s T ⚄ ⚄" the frontman wielded his guitar like a jagged weapon, sending beams of feedback in all directions.

Though much of Vernon's singing that night was processed through auto-tune, warped into digitized chords, the lyrics—even the individual syllables—of 22, A Million proved easy to grasp. A nascent clarity is one of the record's strengths, and when Vernon sang a lament for his long-gone easy days spent in Wisconsin, "Hallucinating Claire / Nor the snow shoe light or the autumns / Threw the meaning out the door / There ain't no meaning anymore," nothing escaped us.

After informing the crowd there'd be no encore in just about the weirdest way possible ("It's extra, that's the whole point of extra. Just don't plan on being that jazzed, I dunno"), Bon Iver closed the show with "_____45_____" and "00000 million" and then calmly exited stage left. As the crowd rose in ovation, I did some quick reflection and realized Vernon had played none of his early material. A handful of songs off Bon Iver, Bon Iver—some of them beautifully reworked—had supplemented the new album, but the night had belonged to 22, A Million. And that was a good thing. In a live setting, its skeletal cages of wispy air are all red blood and muscle. On stage, in 2016, Bon Iver is all about rocking out. It's a rush, designed by a musical genius who's unafraid to vary his approach as he offers his audience trust and love, asking only for the same in return. The music that was born out of Vernon's frozen heartbreak and has grown over the last decade into something louder, more beautiful, and better.