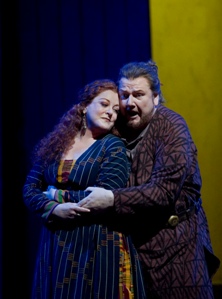 According to the NY Times, the Metropolitan Opera decided to restage Richard Wagner's Tristan und Isolde to bring leading "acclaimed Wagnerian" tenor Ben Heppner and soprano Deborah Voigt together for the first time in a staged production. And for those of you who haven't been able to buy tickets, you can see them in tonight's final performance because it will stream live from the Met's website. (Here's a link that will launch the Met's RealPlayer stream.)

In fact, many ticket holders haven't been able to see Voigt and Heppner together, because of unforeseen problems--such as tenor Heppner having a blood-born infection (!), his second replacement (the first wasn't well-received) Gary Lehman falling into the prompter's box, and Voigt falling ill with a stomach flu during a performance on opening night, with replacement Janice Baird taking over.

Parterre Box's La Cieca will be hosting a live webchat during the performance.

Photograph of Ben Heppner and Deborah Voigt, taken during a March 5 rehearsal, in Tristan und Isolde by Ken Howard/Metropolitan Opera