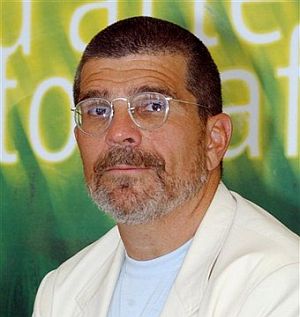 Playwright David Mamet (pictured) will be maintaining a blog to promote his new Broadway play, November, which stars Nathan Lane as contemporary American president Charles Smith and Laurie Metcalf as his lesbian speech writer. What’s interesting, perhaps, is that Mamet will be writing the blog – which he says he’ll update for the duration of the open-ended run – as President Smith. Sample entry from Monday:

It seems to me that, at issue here is not the morality of the Legislators, but that of the pages: can we not fill these positions with young folks who can just say “no”?

ABSTINENCE ONLY TRAINING
My endorsement of this measure, issued in blue covers, first referred to as the “blue Bills”, have come to be known, on late night Talkshows, as “The Blue Balls.” This, while accurate, is disrespectful to my Office.

Ha? The show opens Thursday and also features the excellent Dylan Baker, who you’ll remember as the pederast in Happiness and the hayseed in Planes, Trains and Automobiles. Speaking of hayseeds and publicity stunts, the producers of the Broadway “musical” adaptation of Legally Blonde are headed south to find a replacement for Tony nominee Laura Bell Bundy, who currently stars as Elle Woods. OMG you guys – they’re totally filming the four week audition process for an MTV reality show! And you only have until Monday to get down to Orlando for your chance to star in what theater snob David Cote calls a “brutally corporate entertainment machine”! Details.

Another film-to-stage transfer is coming to Broadway via the La Jolla Playhouse, and this one might not make us misanthropic. It’s the musical adaptation of John Waters’s fearlessly silly 1990 film Cry-Baby, which starred Johnny Depp as the titular tear-choked bad boy and Iggy Pop as Uncle Belvedere Rickettes. The show hits Broadway in March and will feature Tony winner Harriet Harris and James Snyder [um, She’s the Man] in the role created by Depp. Instead of the score from the movie, the show features mostly new numbers penned by David Javerbaum, who’s done time writing for The Onion and the Daily Show.

Reviewing the California premiere, Variety wonders how New York audiences will respond to “a hilarious romp that rarely stops, or stoops, to touch them where they live.” Don't know about you, but we're good with Broadway not touching us anywhere, particularly where we live.

And guess who else may be coming to Broadway? One Will Farrell – though not as Robert Goulet in Red Ships of Spain. The Post's Michael Riedel reports that Farrell was so inspired by Billy Crystal's hit one man show 700 Sundays that he may go out and do likewise.