Is This SoHo T-Shirt Stand The New Banksy?

Banksy hasn't posted today's piece yet, which means a few things: people whose job is to report on every day's new piece have not left their desk all day, and wild speculation about everything that seems remotely Banksy-ish is getting emailed to us. So far today we received everything from this pile of loose flowers and leaves in LIC...:

...to this T-shirt stand, which was set up at Crosby and Broadway earlier today (it's gone now): 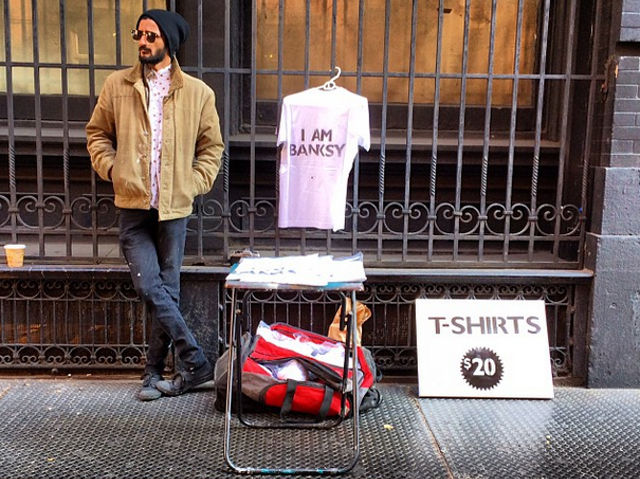 If we had to choose, we'd go with the T-shirt stand. We're pretty skeptical, as Banksy doesn't like to repeat his ideas, and a lot of Fakesys have popped up since his Central Park stand... but the man in the photo doesn't not look like one of his crew members:

Could it all be related to this group that showed up at the Greenpoint piece on Sunday? Probably not, since the stenciling is different.: 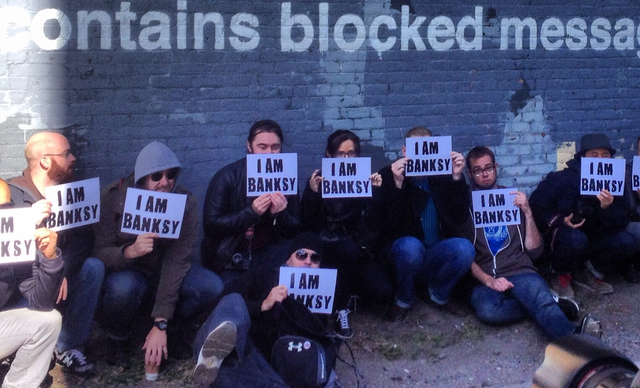 Nic Garcia, who has been following the Banksy pieces all month, tells us he heard this man has been seen at all the pieces this month... which could mean that he's either a fan, or a Banksy team member. He added, "The wait is the only thing that makes me even entertain this idea—the fact this stand was there on the same day as such a late drop. But it's possible he's not posting a teaser about a potential piece [going up] tonight because when he posted a teaser about the Reaper the spot got blown the hell up and he got caught going in and out."

We emailed Banksy's publicist to confirm or deny that the t-shirt stand as an original Banksy, but have not heard back... which could also mean it's real.

UPDATE: This definitely isn't today's piece—his new piece was announced around 3:30 p.m., and is a painting sitting inside the Housing Works on East 23rd. And Banksy's publicist has now confirmed that this t-shirt sale was a FAKE.