Is the Mustard Belt Coming Back to USA By Default? 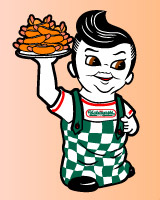 Oh no! Could it be? Is the rematch between Takeru 'Tsunami' Kobayashi and Joey Chestnut in doubt? Last year at the Nathan's annual 4th of July Hot Eating Contest, Kobayashi narrowly defeated Chestnut to win the Mustard Belt for the sixth year in a row. Defending his title next week may not be possible for Kobayashi. First, his mother passed away in March, causing the Tsunami to take a sabbatical from training. Now, news comes from Kobayashi's blog (bad translation) that he's got a bout of jaw arthritis! Apparently Kobayashi can only open his mouth big enough to fit a finger and the injury happened just a week into training.

If his accounts are true, Kobayashi certainly won't be able to scarf down a record number of hot dogs or beat Chestnut. Kobayashi says that, despite the injury, he still wants to return to New York to defend his title, "I want to be the pride of my mother." If you have any doubts that these eaters were real athletes, there you go. They get injured while training, and they want to honor their deceased relatives.

In a qualifier for this year's Nathan's event, Chestnut ate a whopping 59 1/2 hot dogs with buns, shattering Kobayashi's record of 53 3/4 from last July 4th. If Kobayashi is still injured when July 4th rolls around, you can be sure that Chestnut will bring the Mustard Belt back to the United States. One has to wonder though - is a victory over the Michael Jordan of competitive eating the same when he's not in top form?

Of course, this could just be an elaborate ruse to trick us into thinking that the Tsunami is out of contention.