Is Someone Living In This Rooftop Vintage Trailer In Brooklyn?

If you can get a vintage Streamline trailer up to the roof of a building in NYC, shouldn't you just be allowed to keep it there? That should be the rule. However, real life rules state you need permits for such a thing.

According to the Brooklyn Paper, a vintage Streamline (identified by the paper as an Airstream, which is different) currently resides on top of the roof of a one-story building off Van Brunt Street in Red Hook, "and the mobile-home-extension is racking up fines. The non-traditional home enthusiast who lives in the one-story building at the corner of Van Brunt and Seabring streets has also built a wooden hut the size of a studio apartment and installed two 10-foot planters on top of the building." This is all according to city records, which also state the Streamline has been there since 2012 (Google Earth's timeline confirms). In that time the owner has accrued $30,000 in fines.

It's believed that owner is Agron Haskaj, who has posted a photo of the Streamline on his Facebook. Haskaj did not respond to a request for comment, but we will update if/when he does.

The Brooklyn Paper notes that RX Construction Inc. owns the building, "but mortgage documents show the owner is Haskaj—a principal with Trion Construction company. Both companies are roofing contractors." So at least he knows what he's doing up there. 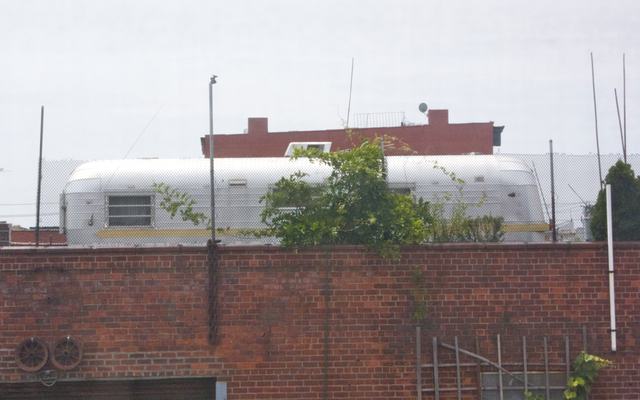 Cabin on a roof
Cottage on a roof
Shanty on a roof
Pool(s) on a roof
Vinyl siding on a roof
Cupolas on a roof
How do I even get to my roof?
Rooftop door alarms: what's their deal?
Rooftop basketball court
Never look up

#real estate
#red hook
#roof
#rooftop
#streamline
#vintatge trailer
Do you know the scoop? Comment below or Send us a Tip