At last night's Community Board 6 meeting in Red Hook, local residents voiced fears that their quiet, low-key neighborhood might be destined for a future of pulsating bass, bright flashing jumbotrons, and Skrillex fans vomiting on each other's platform shoes. The neighborhood's waterfront container terminal port, which just last weekend was transformed by Vice into a vodka-drenched, EDM-fueled commercial video shoot, will once again become a concert venue when it hosts the Escape Music Festival on October 11th and 12th.

Festival organizers expect some 6,000 people to spin through the gates over the course of a weekend that will bring Moby, Girl Talk, and a bevy of other DJs and bands to the play amongst the cranes and containers of New York's only residential area port. Massive speakers will blast music from 11 a.m. to 11 p.m. each day, and at last night's meeting, Escape's production manager Neil Ryan warned attendees to "make no mistake about it—you will hear that sound." Which is precisely what residents don't want.

"I think you're corrupting it, throwing a giant pop music festival here," Red Hook resident Rob Riley said of the waterfront and its captivating vistas. "That view shouldn't be commercialized for your profit. It's for the neighborhood."

Escape's founder, Merrity Quirk, attended last night's meeting with other higher-ups in hopes of assuaging residents' worries. "Our vision is to involve the community," he said, "so it's important for us to get feedback from you." He went on to mention Escape's plans to hire locally and feature Red Hook food vendors on the festival grounds. He called the festival "a major media and branding opportunity for Red Hook."

"I don't know if you chose the right location," Riley retorted. "We already have a brand here and it's not the craziest Ibiza party. We don't need a new brand for Red Hook."

The pier's terminal president Mike Stamatis was also present at the meeting and reminded the room that the pier is a private, working port. Despite last weekend's Absolut-sponsored rager and next month's two day festival, Stamatis insisted that "this is a working port and it's going to continue to be one. Doing these types of events, if it happens once or twice a year, that's a possibility, if it fits within the community's idea of what benefits the community as a whole." 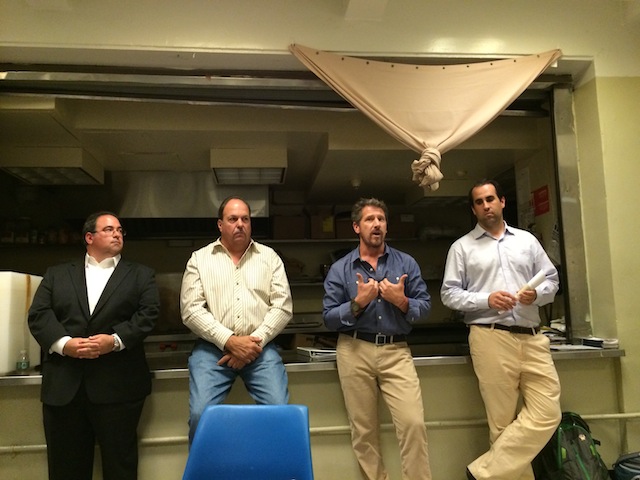 Most of all, neighborhood residents were upset at the pier's hosting of aberrantly loud concerts without opening itself up for locals to enjoy the same space. "I'm looking for opportunities so that people who live in my community can get to know their next door neighbor—the port," Van Brunt Street resident David Lutz said. Stamatis mentioned a possibility of future guided family tours, but made no hard commitments about opening up his terminal to the public.

As Quirk told of Escape bringing "thousands of people that haven't been to Red Hook before...for the first time and see what Red Hook has to offer," many in the room shook their heads in dismay.

#community board 6
#escape festival
#red hook
#original
Do you know the scoop? Comment below or Send us a Tip