Ira Glass has been taking an intro to improv comedy course. It sounds like a pitch for an episode of "This American Life," but last night Glass and his Level One: The Principles of Improv classmates took to the stage at the Magnet Theater’s studio training space for their class performance.

Apparently, improv has been on his mind for a little while. Back in September, he told The New Yorker’s Sarah Larson: “I’m thinking of moving on to improv comedy” and “I’ve never said these words out loud. It’s been a secret thought for like a month and a half.”

The Magnet (think: UCB, but less slick, more homey) focuses on the teaching of improv as much as the performance of it, but each class ends with a show—and the shows, mostly attended just by friends and family, often feel like equal parts comedy and confessional. Other than the inescapable fact that one of the people on stage appeared to be public radio legend Ira Glass, it was a totally ordinary performance. 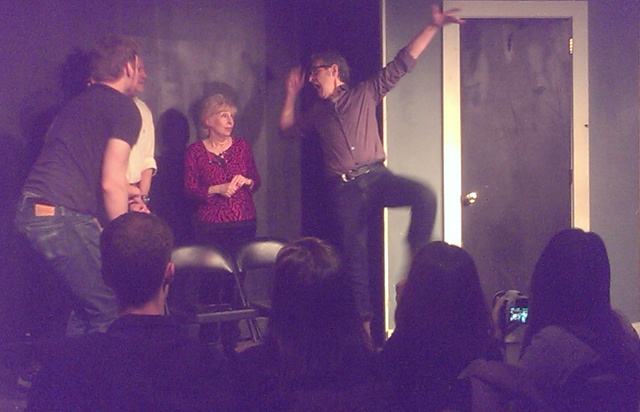 So how did he do? As an improv comic, Glass jumps into any scene easily. At the same time, prerequisite awkwardness is palpable in both he and his classmates, inducing numerous little hesitant moments ("Is this scene dead yet? Should I jump in here?") throughout. It's not like speaking extemporaneously is foreign to Glass. But this time, it was a treat to experience an unedited, less polished version of the same.

In one of the Magnet’s signature forms, the Armando, one player gives a brief personal monologue and then others go into an improvised scene in some way inspired by the monologue. It was the perfect fit for Glass, who started with a monologue on a recent experience of playing a video game with his 7-year-old nephew.

Tell me this doesn’t read like a transcript of the opening monologue of an episode of "This American Life:"

He wanted to play this new Xbox game; I haven’t played a video game in years, and so we played this game. And the game was like a, it was a whole world, that took place in Venezuela. [laughs] And there were instructions, like people would say, ‘go to this town, and meet this person,’ and that would happen, and I would say to my nephew, ‘OK, let’s drive the car there, and go there,’ and what I’ve learned as that he had no interest in anything the game wanted him to do; it was totally fascinating. [laughs] What he liked to do was he’d get into the car or the motorcycle and just drive and kill people.

There were some present who knew the significance of what was transpiring before us; I wasn't the only person recording, to be sure. But, for the most part, it was a standard intro-level amateur improv comedy outing...except with a lot of jokes coming out in the instantly recognizable voice of public radio.

David A.M. Wilensky is a freelance writer, editor and Jew.

#improv
#ira glass
#the magnet
#this american life
#original
Do you know the scoop? Comment below or Send us a Tip