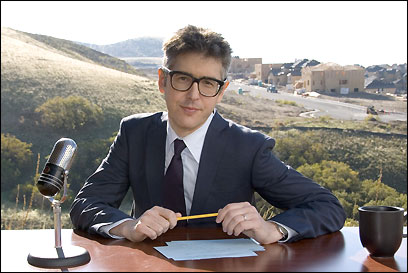 Ira Glass is the brains, heart and larynx behind the wildly popular program This American Life; each show employs a theatrical, multiple-act structure to carve strange slices of life out of a unique thematic pie. The show began almost 12 years ago as a Chicago public radio program but has since mutated into an Emmy-nominated TV series on Showtime – a leap that prompted Glass and his team to relocate to New York City, bringing the radio version in tow. But Glass still keeps one foot in Chicago; he’s compiled a new book whose proceeds benefit 826CHI, the free writing program open to all students in Chicago. He’ll be appearing at Town Hall Monday night with Susan Orlean, Malcolm Gladwell and Chuck Klosterman, who have each contributed to the book, called The New Kings of Nonfiction. (Tickets cost $30; all proceeds benefit 826CHI.)

Did you have any dreams of working in radio as a child? No, like most people I had no interest in radio. I only got interested in radio once I talked my way into an internship at NPR’s headquarters in Washington, D.C. in 1978, never having heard the network on the air.

Perhaps not everyone is familiar with what a degree in semiotics involves. Can you please sum it up for us? Yes. Semiotics is an unfortunately pretentious body of mostly French literary theory. What I liked about it was that it gives you a toolbox of ways to think about how to make a story. Semiotics is uninterested in questions like, “What did the author intend?” Or “What does this story say about the author’s era?” Semiotics is interested in how a story gives us pleasure, how it draws us in, why is it satisfying for there to be suspense and for a story to resolve. It’s all about what makes narrative engage us. And so there are things that I learned as a semiotics major that I use every day on my job.

Can you give us an example of that? One simple thing has to do with something the writer Roland Barthes writes about in his book S/Z. He talks about this thing called the proairetic code, which he cops from Aristotle. It’s a sequence of motions that creates suspense no matter how banal it is. You simply get the action moving. This thing happened, and then this thing and then that led to this next thing and then that next thing. And we inevitably wonder what will happen next. It’s like a striptease; we feel like things are going to be revealed. And we use that in every episode of the show. The reason why this show starts with action instead of starting with a theme song and listing what’s going to come up in this hour is because I think starting with action can just pull you into the show more deeply and then you’re inside the show and inside the story before you have a reason to wonder why.

What’s the episode that’s gotten the biggest response? Julia Sweeney talking about becoming an atheist. She was having a good experience at her Catholic church and she decided as an adult to read the Bible; she had never read it. So she took it apart and read the entire Bible. And as she read it, it convinced her more and more deeply that there cannot be a God. And it’s a very slow process actually that gets her to that point, because she finds herself questioning one thing and then another and then another and by the time it’s done she realizes that she simply doesn’t believe in God anymore. And that’s not the outcome she wanted; she wanted very much to believe in God, she didn’t want to disbelieve. When we put her on the air it became the single most popular thing we ever put on the air. We sold hundreds and hundreds of CDs. People went crazy. The atheist market is a very overlooked and powerful market, it turns out.

What was the experiment? It was different things different weeks. It was a free-form radio show that no one really does anymore. The three of us would bring in stuff to play for each other and the audience and things to read and we would just try to amuse each other. Some weeks it would more serious; most weeks it would pretty funny. And I think my two cohorts would agree that in any given month one show would be great, one show would be horrible and two shows would be decent. It was on late nights Friday night on a local station and it deserved its time slot.

Why did you become a vegetarian? That’s kind of a long story with many parts but it includes me being stalked by animal rights activists. And I finally went and met one of them. She was objecting to people who had come on our show and said that you don’t bond with a chicken when you’re a chicken farmer because chickens don’t have personalities. And this woman named Karen Davis insisted that she had chickens and they had personalities and that if I came and met them I would discover that my journalism had been in error. There are outgoing chickens and shy ones and all of that. And I went and met the chickens and it turns out that she was correct; they do have different personalities. And for a while after that every time I would eat a chicken I would wonder if it would be the last time and eventually it was the last time and I felt I could never go back. The other thing that was a big factor is that I was falling in love with my wife who is a vegetarian and by watching her I saw that it was actually incredibly easy to be a vegetarian. It’d be different if it was hard but it’s actually very simple.

You have put together a new book called The New Kings of Nonfiction and all the profits go to 826CHI. What are some of the essays about? There’s all kinds of stuff actually. These are pieces of reporting that various people have done over the years. Most of them I saved in a stack of papers of newspaper clippings and magazine clippings that I keep on my desk. There’s Malcom Gladwell and Chuck Klosterman and Susan Orlean and a bunch of lesser-known writers as well. They’re all stories that have strong entertainment values. I think every one of the writers in the collection in one way or another very much wants to engage the reader and many of their feelings. Many of the stories are funny; many of them are very moving. These are writers who are very interested in finding original ideas out in the world to present in their writing.

Do you think we’re living in “an age of great non fiction writing”? I do. People don’t talk about it that way because we’re also living in an age of incredible crap. Especially in journalism. But yeah I believe that giants walk among us, that writers are doing things in nonfiction – in their reporting – which is sort of breathtaking. But mostly we don’t talk about them that way.

What distinguishes the nonfiction writing in this time period from other eras? That part I don’t focus on as much in this book. I will say there are things these writers do that writers have been doing for decades. Ever since Tom Wolfe and the New Journalism, which was a style of American journalism which was very aggressively trying to engage the reader and entertain. So that in and of itself isn’t new. What they have in common is an empathy with people in the stories and a kind of curiosity about the world that is so aggressively and deeply expressed in all of these stories. And again: None of these things are new to journalism, there’s all sorts of journalism throughout the decades which has done that. But there’s something about the voice of these pieces and the way it comes together and the sheer skill of putting out their ideas that feels different and contemporary.

The Publisher’s Weekly review of the book noted “unintentional chauvinism” in the collection’s inclusion of just 2 female writers. Is that a fair criticism? I guess. I probably should have included more woman writers because there are plenty of great woman writers. Sure.

Do you reside in NY now? Yeah. We moved our radio show to New York City to film the television version of our show.

Please share your strangest "only in New York" story. You mean besides ordering in food? Every time I order lunch I am having a strange only in New York experience.

Given the opportunity, how would you change New York? Wow, I’ve never thought about any of these things. I would ask people to talk about the subway a little less. I think people who live in New York don’t realize just how much time they spend talking about the subway.

Do you have a current soundtrack to the city? No. No. You mean, do I walk around with a boom box playing the theme song to Shaft or something everywhere I go?

Yeah! No. I wish I was living that kind of life but I’m not. I don’t know why I said the theme from Shaft; I guess that’s not a New York song. I don’t know.

What’s the most unusual fan interaction you’ve had? In New York I’m almost never recognized – or if I am people keep to themselves. The strangest fan experience I had was through my wife, who has an rss feed that shows her when someone blogs about me. And she showed me that someone had posted a photo of me on the internet picking up dog poo in front of the house. That was probably the most unusual. It was strange to think that someone would have chosen that moment to take a picture of me.

At least they caught you doing the right thing and picking it up. I’m a very good citizen, yes.