Filmmaker Whit Stillman is taking a stab at the small screen—nearly a quarter century after his first feature film, Metropolitan, he's created a series for Amazon's new season.

We premiered his pilot for The Cosmopolitans at Nitehawk Cinema in Williamsburg last week, and the show fit just fine up there on the big screen. In fact, it's like watching one of Stillman's earlier films, but glimpsed through short vignettes that will leave you wanting more. When the series is complete, we imagine it will be easy to watch straight through as if you're watching a feature film.

The 25-minute episode is full of the signature Stillman nuances that make his films so singular. There's the perfectly chosen music (which Stillman told us is always a struggle to secure) that carries you from the opening shot through the credits. You'll get characters who all seem bored by and yet simultaneously pining for more discussion on the minutiae of life, loneliness, lust and love. There's smoking, dancing, and wrong paths being chosen with every sip of champagne. It's easy to be drawn into their world, which almost seems like it exists somewhere between reality and an idyllic vision some precious undergrad has of life in Paris. 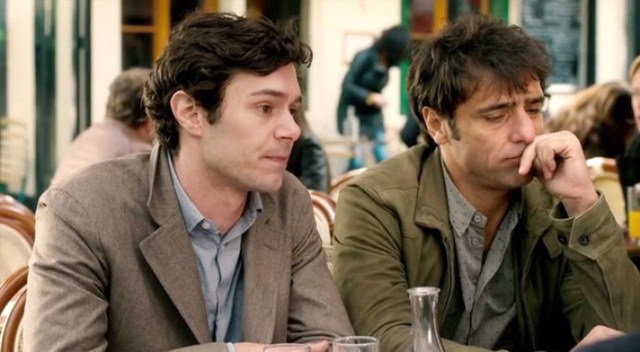 Adam Brody with Adriano Giannini in The Cosmopolitans

The show follows four ex-pats—played by Chloë Sévigny, Adam Brody, Carrie MacLemore, and newcomer Jordan Rountree—who are living in the City of Lights under various circumstances. The pilot is now available to watch on Amazon (right here), and viewers will vote to choose if it (along with four other shows) will become an Amazon Original series.

#the cosmopolitans
#whit stillman
#original
Do you know the scoop? Comment below or Send us a Tip