Introducing Summer Sucks, An Ongoing Series On How To Survive Summer

by Jen Carlson and Paula Mejía

Jen Carlson: Okay, I’m super psyched about hating on summer. I think you are the first person I've met who also hates summer, so this year I feel less alone.

Paula Mejía: It really does feel isolating! I've only ever known one other person who hates summer.

Jen: In the past when i’ve mentioned i have Reverse S.A.D., people laughed and assumed I was kidding?! But it is real, as you know.

Jen: Maybe our Summer Sucks series can be like a support group for people, while offering tips on how to get through it.

Paula: Absolutely. People who aren't super psyched on Fun in the Sun™ are so often left in the dust.

Jen: I am very suspicious of people who are overly enthusiastic about summer, especially here in New York. Like wtf are you so excited about? The stifling humidity? The sweat dripping down your back on a crowded subway with broken a/c? The hot garbage smell?

Paula: Maybe it's partially a holdover from when you're younger, when symbolically summer means school's out and you get a long break. But growing up in Houston, those months were often excruciating and extremely humid! And now as an adult in New York the summer excitement makes even less sense to me.

Paula: Exactly. Just load me into the inflatable coffin and push me out to sea already.

Paula: Sweat stains and all! 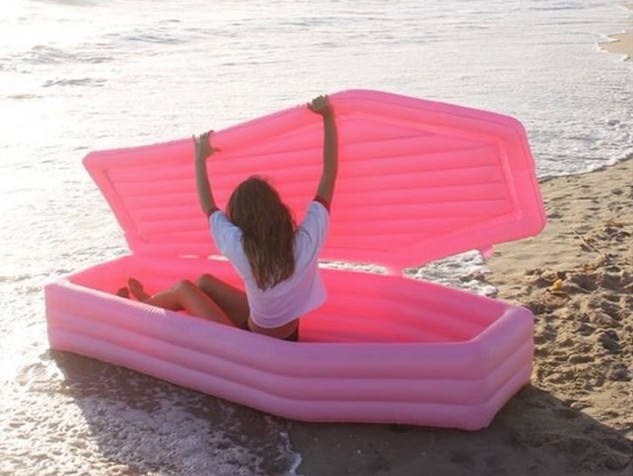 A pink coffin float is the perfect summer sucks float and our unofficial #NYCSummerSucks mascot. (via Pom Pom Floats Kickstarter)

Jen:The pink inflatable coffin is a must-have for any of summer's anti-influencers. And speaking of social media and its lies, summer drinks are the worst. In winter you get to drink whiskey but in summer they make you have frozen rosé, which is a bullshit drink.

Paula: I do love a margarita.

Jen: Okay, that’s a classic. And I really want to get into those actually. That is my summer goal. I refuse to delve further into summer than that though.

Paula: That's a worthy goal! You can still be a Summer Hater and enjoy margaritas.

Jen: I'm already picturing myself, in black tights, on the inflatable coffin, drinking a marg.

Paula: Have you had nutcrackers? They sell them at the beaches here (which I never go to) but I’ve had them and… they're something else. I would definitely read a story about the day in the life of a nutcracker maker/seller.

Jen: I'd definitely watch a Netflix series about a nutcracker purveyor who hates summer.

Paula: *drops everything to write a pilot*

Jen: Hit us up Netflix.

Welcome to Summer Sucks, we'll be here all summer, in the shade and on the Internet, feeding you content related to the earth's worst season. Summer. It fucking sucks, man. But this isn't just about us complaining—we'll be talking to mental health specialists about how summer can destroy your well being, and why sadness during the Toasty Time is so misunderstood. We'll be answering your questions in our new advice column, Ask A Person Who Hates Summer (wondering how you can keep cool without contributing to climate change? We got you covered.) We'll provide tips on the best places to be during the summer (they will all be in cool basements, probably). We'll also have NYC summer wardrobe tips from the man who dresses John Wick (really!).

We have literally nothing else to do for the next few months, because we refuse to go outside. Hit us up if you have any questions (use "Summer Sucks" in the subject line), or just want to commiserate. And please hashtag us in your summer misery photos with #NYCSummerSucks.

#summer
#summer sucks
#the worst season
#original
Do you know the scoop? Comment below or Send us a Tip