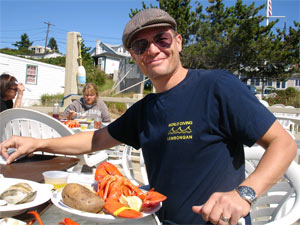 Two years ago, we spoke to Birch Shambaugh before he ran his first NYC Marathon. We learned that spectators yelling "AWOOOOOGAH" was a preferred cheer and that He's running again this year, so we checked in to ask him about the second time around.

Last time we spoke to you, you were running your first marathon ever (the 2005 NYC Marathon). How did it go? Have you run another one since?
The '05 marathon was incredible. It was pretty hot, neigh 70, and being in the midst of 30,000+ people all sweating, heaving and lurching towards the same goal was intense. I finished in fairly respectable time but what made the strongest impression was the last few miles. Everyone talks about the wall but, until you've actually run smack into it, there's really no way to describe the reality of trying to will your body into something as all systems are ungracefully shutting down. I crossed the finish a spastic and mildly hallucinating salt-lick.

Haven't run another since - got married last fall which was really it's own sort of marathon.

What is your strategy for this year? What time are you hoping to run?
To be honest, not sure I have much of a strategy unless "run fast - don't trip" counts. I've been training pretty hard with my buddy, and fellow member of our running/bbq/motorcycle club the Dukes of Flatbush, Jeff Eckhaus. A real drill Sargent, Jeff's read all the books and devised a bespoke training plan; has us doing all sorts of ignominious things in preparation.....wind sprints?!? It's been like months of physical detention. He's also kept a stout log of our efforts at the DoF website where you can learn all about the foolishness that goes into preparing for a marathon.

Long story short - I feel pretty fit and hope to run well. My goal is a 3:15. Not sure how feasible it is, but that would qualify me for Boston in the Spring. You never really know though - could get attacked by seething gull on the Verrazano. Or waylaid along the course by an especially fetching Bloody Mary. Anything can happen in the NY Marathon.

What are you eating tonight? What time are you going to bed?
Tonight will be an early mound of pasta, some kind of cheesy inspiring movie and then pack it off to bed as early as I can. Maybe 10? Which will, in all likelihood, be followed by hours and hours of leg-twitching sleeplessness. The taper down in mileage leading up to the race plays havoc on your legs and body so there is mucho bed-thrashing once the lights go out.

Are you nervous about remnants of Hurricane Noel on Sunday? How will it affect your fashion choices?
Not very worried about Noel...looks like the storm is going to clear out and create perfect running conditions...sunny and mid 50s w/ tolerable winds. The only Noel inspired worry I have is that I'll be unable to ignore the siren song of the surf she's generating today off Rockaway. 4-6 and clean w/ offshore winds doesn't happen so often around here but surely paddling out the day before the marathon would be a fool's errand. Or so my wife Fayth tells me at least; smart lady.

As far as fashion goes - little to say...shorts, kicks, a heavily modified bright orange Fred's Team shirt and a healthy dollop chafe-deterring Bag Balm udder salve. Chafe is the marathoner's bane and must be avoided at all costs. Last time around my things and nipples bled...

What do you think of Katie Holmes reportedly running in the marathon?
Heard that she was running. Should we cross paths I'll do everything in my power to control the strong inclination to shorts her. Far be it from me to want to impede another's race, but the urge to prove she's a genderless alien is strong. Verrry strong. Of course, should should she prove mortal and I'd exposed her, um, Dawson's Creek to all the world, I'd feel right lousy. Either way I'd be pretty much guaranteed a miserable future; endless flagellation by trout-wielding Scientology goons or some such.

On second thought - maybe I'll just ask her to defect to the Dukes of Flatbush.

Tell us about the cause you're running for.
This year I'm running for Fred’s Team. Fred's Team is is raising money for the Aubrey Fund for Pediatric Cancer Research which specializes in treating a number of types of cancer in children, especially cancers of the blood and lymph system like acute lymphoblastic leukemia. Running the marathon is itself a rewarding personal goal, but running it for a cause like Fred's Team makes the effort far more meaningful. If you want to learn more or are interested in supporting, please peep my fund raising page.

And what will you be doing after the marathon?
Ahhhhhhhhh, there's the motivation that's been pulling me through. I've been really, REALLY behaved for ages. It's been a week since I've even tasted the soothing malted deliciousness. So immediately following the race I'll look to remedy that situation by joining the standing Dukes' membership for some celebratory beers and tall tale telling. Then it's home to dine on a garlic roasted pork shoulder and black bean soup meal that my unreal lady has been preparing for, literally, days. My mouth is watering right now from the garlicky bewitchment of ham-hock stock preparation. My god it smells divine.

As if that wasn't enough, the full fiesta continues next weekend. We cook an annual Taste of Fall dinner in celebration of all things autumnal. This year it's been timed to coincide with the end of Marathon season and we're getting serious. The 8 course meal for 20 will be anchored by the spit-roasting of a whole lamb. Preparations for this affair are pretty awesome and can be followed on our cooking blog at Tasty Tuesday. For eons a whole roasted lamb has been people's chosen method of celebrating life & love, friends & family. Needles to say I'm frightfully excited and can't think of a more fitting way to end marathon season; three thousand years of beautiful tradition, from Moses to the Dukes of Flatbush.

The ING NYC Marathon is tomorrow. Cheer on all those amazing runners along the route!