In the John Wick franchise, Keanu Reeves dons bespoke suits that are as much of a character as the eponymous, reticent assassin he portrays. John Wick's gorgeously-tailored outfits are entwined with his blood-soaked path of chaos, at once emphasizing his precision as an insurmountable killer and, on a practical level, help render him physically (as well as psychically) bulletproof.

Luca Mosca is the seasoned couture costume designer and New Yorker who's designed the suits that Reeves has worn in every John Wick film thus far, as he punches and kicks his way to redemption (a killing rampage that's fueled, in part, because some guys stole his car and killed his dog). In a meta twist, Mosca played John Wick's own tailor in John Wick: Chapter 2, during a memorable scene where he helps Wick suit up with "tactical" lining he needs to make good on his mission. At the end of that film, we leave off with Wick being kicked out of the Continental (a high-end, luxury hotel that caters to skilled underground assassins like Wick) because he killed someone on company grounds, and John Wick: Chapter 3 - Parabellum kicks off with Wick on the run.

Ahead of the release (Friday, May 17th), Mosca chatted with Gothamist about the practical aspects of making a killer suit.

We left off with John Wick being "excommunicado." He's a man on the run—how does that translate to what he’s wearing now?

He’s an excommunicado... almost. Not yet. His buddy Winston (Ian McShane), the manager of the Continental Hotel, gave him an hour to run away. So that hour is really very important for John to try and run away. We pick up exactly at the same time and point. So the first half of the movie, until he goes to Africa, is done in the same exact costume as John Wick: Chapter 2.

When you do an action movie you don’t dress up in one costume.... we had a hundred suits standing by, all identical or almost identical, and then once in Africa, once he sought redemption, then he dresses up with a second suit.

The change is dictated by proportions evolving, so the fit is slightly different than the fit I would have designed two years ago. Subtle, tiny, almost invisible differences in the shoulder, in the collar, in the way the pants fit. But at the end of the day it’s the same silhouette. The second suit is all black, and the fabric is very interesting. It’s a fabric that is a sort of grid pattern, like a square texture... it’s not really a pattern, it’s a texture. Just to convey that these suits are made from a high, technologically-advanced fabrication.

How many identical copies of a suit do you have on hand, especially during fight scenes? I’m sure there’s a lot that can get in the way of John Wick’s suit looking pristine.

From looking pristine to looking trashed... there are different stages. It’s really almost like a mathematical formula. You take the script and together with the director, AD (assistant director), stunt coordinator, you determine, as the costume designer, how many stages of the suit are needed. Even if you see the same costume, which is the same black suit with a black shirt and a black tie... they all have different tears, different cuts and bruises, and smears of dust, bloodstains, etc.

Of course, what you see in the movie is Keanu Reeves, who is the most fit, athletic, and stunt-ready actor in the history of cinema. Regardless there’s always a stunt double doing things for him, maybe when there is a fall from the fifteenth floor of a building, when there is a motorcycle chase in a particular fall, or when there is a horse chase. So at that point, that creates a multitude of costumes. And so when I come down with a final answer and I tell you for the black costume alone, John Wick had around 80 suits, well then you understand why. 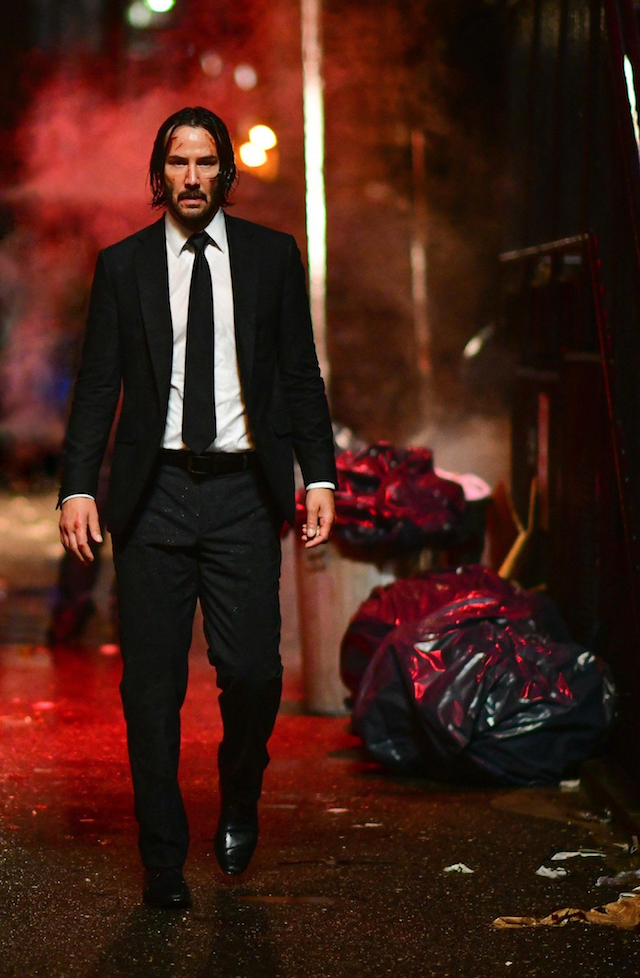 John Wick, a man on the run. (Lionsgate)

How do you think about the movement of the suit when Keanu is doing these stunts? I imagine you have to have something that’s flexible to a certain degree, but still looks sharp and tailored.

Absolutely. You completely understood probably what is the most important component of the costume-making process of the John Wick franchise, or for that matter, for any stunt-driven movie. Movement, range of motion, flexibility and all of that. I know for a fact that a suit is not necessarily a garment that allows you for the widest range of motion, because raising your straight arms in front of you to clasp a gun and point at somebody is a big challenge when you’re wearing a regular suit. Let alone rolling on the floor and getting into a body contact fight with an opponent... maybe this time around with knives?

In any event, these suits are altered. We have what we call a hero suit. A hero suit is the one that fits perfectly. It is the number one costume, and that is made to look fantastic on the actor when there is a walk and talk. But when it comes to action, we insert additional pieces of fabric in the armhole area, in the crotch area, alongside the seam of the pants. We make little panels of fabric in the seams of the jackets and of the jacket sleeves, so that the costume has more room and allows for more motion.

What do you think style represents for John Wick? Is it purely practical?

I think that John Wick is driven in his costumes by two things: Practicality, together with the purpose the costume must fulfill, which is bulletproof (in the case of the tactical lining). But a very important aesthetic component of being streamlined and essential. Very simple.

When we first meet him in John Wick it picks up at a point in life where he is grieving [the death of his wife], he is empty, he is full of rage. And all of these negative feelings are transmuted into the costume. There’s no joy, there’s no room for color. There’s no happiness, no serene blues and greens. There’s no passionate reds and rusts. No. This is a costume has no color, no passion. It’s a lack of everything, and it needs to be streamlined, simple. Essential. And that’s how we achieved that elegant silhouette. The colors are dark charcoal. Sometimes the charcoal is darkened a hue or two and it becomes black or brown, a couple of tints, and it becomes a dark gray. That’s what John Wick plays with. 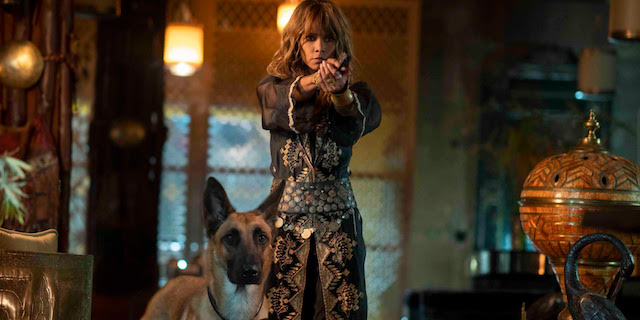 How did you conceptualize the costumes for newcomers in the John Wick universe, like Halle Berry and Anjelica Huston?

Halle’s look was driven by a lot of research. I did a lot of textile research on Halle, both contemporary and antique patterns. And embroideries. Her two costumes, which you will see in the movie, have a lot of black and gold embroidery. We wanted to keep that motif, she has that black and gold thing in common with both costumes. One is a very decadent, lush, rich, powerful sort of gown/robey costume. The second one is more streamlined for action, for kicking and fighting and shooting. And her costume was really born from a lot of research, from a lot of authentic Maghreb-area—Moroccan in particular—textiles.

With Anjelica... another dreamboat personality. I had a fantasy of fringes, of rich, ornate shawl wrapping her up that could give her wings to fly, like a wild bird of prey. And so I came up with these intense, blood-red lace shawls, with long fringes, which she used to walk around the scene. To fly around the scene, as if it were those two pieces of drapey fabrics had been wings. It gives her so much power, together with the jewelry and the black satin base of her costume.

#Anjelica Huston
#costume design
#Halle berry
#john wick
#John wick 3
#Keanu Reeves
#luca mosca
#parabellum
#suit
Do you know the scoop? Comment below or Send us a Tip
A new Gothamist is coming! We’ve moved comments over to our beta site. Click here to join the conversation and get a preview of our new website.