"Oh, sh*t! JUSTICE is here?" Harlem rapper A$AP Rocky and his entourage leapt over the ottomans and coffee tables in the makeshift lounge set up for talent at the Creators Project on Saturday. The French duo, who were to appear for a DJ set to promote their upcoming album, Audio, Video, Disco, had moments before been sitting quietly in the far corner of the room speaking to the endless parade of media. Now they were engulfed in one-finger salutes and raised glasses for a impromptu photo-op. "Yeah, son! Motherf*cking JUSTICE! Motherf*cking A$AP Rocky! That's right!"

Just as we caught Xavier de Rosnay and Gaspard Augé exchange a furtive look of exhaustion, we were posed a question: "Would you like to interview the band?" Without a recorder or any prep, and given the fact that everyone from Guns & Ammo to Highlights had just spoken to them, we cautiously accepted knowing that we would only ask the most important questions that inquiring minds demanded to know.

Your last LP came out four years ago, but the singles from this new album don't sound materially different than what you guys were doing four years ago. What do you say to people who think you're a one trick pony? That you guys aren't "growing as artists" or whatever the phrase may be.

Xavier de Rosnay: We are a one trick pony, and we're happy to be a one trick pony. We try to take the same idea, and give it a different texture, to make something new. It's okay to us to use the same formula, it's our formula. It's like an old friend with a new hairdo. Or how you can live a lifetime of experiences and have the same dream—the same sort of obsession lives in our music, and if it all sounds the same—

Really? I can't tell the difference between any of their songs unless it's pre or post Bon Scott.

Augé: No, I'm not comparing us to AC/DC, we're obviously very different. But they do one thing, and they do it very well. We just want to be really good at what we do, and we know how to do that.

What do you guys think about the Occupy Wall Street protests going on downtown?

Rosnay: We were just told about them, and we really don't know a whole lot, so I don't think we can really speak about them. We have one rule in JUSTICE, and that is: don't talk about politics. 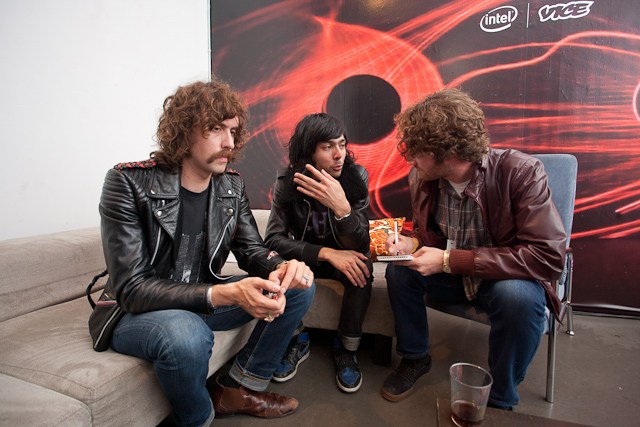 But these protests aren't exactly political. They're nebulous, leaderless, politically unaffiliated expressions about the widening gap between the rich and the poor. France has a long history of civil unrest.

Rosnay: Yeah, okay, I'd just rather not say when we're going on so little information.

I'd love to know what you guys think about the Dominique Strauss-Kahn affair.

Augé: [Laughs] I don't think we have any comment on that.

You guys aren't in New York very often. What do you like to do when you're here? Do you have a favorite neighborhood or place to eat?

Rosnay: We love almost everything about New York, and frankly we're just happy to be here. To walk around on the streets, to feel the atmosphere and all of the energy that we don't get anywhere else—that's enough.