Interactive Play Lets You Cosplay Heroin Addiction On The Bowery I wasn't quite sure what to expect from Live In Theater's J & K 1965, a "highly interactive" performance piece surrounding the subjects of a real-life LIFE magazine photo essay about heroin addiction in 1960s NYC. I wasn't prepared to find myself holding hands with a bunch of strangers in the middle of a Lower East Side park as we simulated shooting up. We flexed our left arms and used our index fingers as faux-needles, nervously giggling as the theater director played trippy music on his iPad. We were directed to run in a circle and collapse on the ground while kids playing ball stared at us. It was profoundly uncomfortable, which was, I suppose, the point.

J & K 1965 is the brainchild of Carlo D'Amore, Live In Theater's creative director. He's a big NYC history buff, and he was so struck by the aforementioned 1965 Bill Eppridge photo essay—which starkly captured its two young, white, good looking subjects, John and Karen, both reveling in and struggling with addiction—he wanted to recreate it, 1960s fashion and all, with actors and audience members alike.

There are only two professional actors in J & K 1965; Kevin Percival, who portrays John, and Phoebe Dunn, who plays Karen. The rest of the roles—fellow addicts, police officers, johns, and even Eppridge—are doled out to the audience, and if you're not comfortable with the ultra expressive, erratic "John" hounding you about why you can't pay him for his LIFE photo shoot, well, you're just going to have to lean in.

I don't want to give away too much of the play for those who haven't seen it and want to, and I'm still trying to figure out if I liked it. I didn't enjoy it in the moment, but reflecting on it makes you appreciate certain aspects more. I'm also not sure if I was supposed to enjoy it. Some of it felt exploitative, if unintentionally, which is perhaps the problem with performing it in public.

A big chunk of the experience, for instance, involves following John and/or Karen around the LES looking for heroin, and at some point we ended up in front of the Bowery Mission, where homeless men and women still go to find meals and medical care. John simulated withdrawal, slumping down against a wall and shouting into his hands, while audience members awkwardly tried to comfort him. A man standing outside the Mission came up to us. "What's going on with him?" he asked, sounding concerned. "It's a show," one of my fellow attendees told him. The man rolled his eyes and went inside. 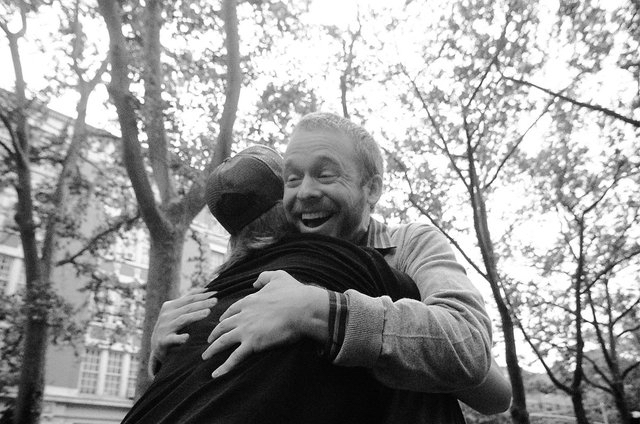 In an interview with Gothamist earlier this month, D'Amore made it clear that he wasn't trying to minimize drug addiction by turning it into entertainment. "[T]his also has to be done in a way that's very tactful. Because we're not glorifying drug addiction at all. We're just trying to give people an in-depth look at drug addiction," he said. "[John and Karen] are having a blast, then all of the sudden they're not, and then all of the sudden they are again, so it's a tumultuous experience."

It is, indeed, a tumultuous (and, at 80-plus minutes, a tad overlong) experience, especially with the audience participation angle. Percival is particularly discomfiting as John, and it was startling to watch him joke with one audience member one minute, then get in your face and bark at you for holding out on him the next. At some point he took us down an alley off the Bowery and I feared he'd pull a knife on us, real or fake.

For the most part, though, it was clear this was a performance, and it was never really "entertaining," though there was a lot of that aforementioned nervous laughter. Some audience members were really into the interactive part of the show, but it felt unsettling, play-acting in the midst of America's very real opioid crisis, and since we were in public for its entirety, I never wanted to look like we were poking fun. Like Sleep No More, the experience is tense, but without the added benefit of being able to flip through old books, plus the baffled onlookers sort of lessened the intensity of the whole thing.

But Percival and Dunn treat the material seriously, and they do, as D'Amore promised, invite viewers to "see their humanity." You're spending 80 minutes with these people, and by the end even this skeptical audience member left feeling like she got a look into their world. The discomfort and tenseness is all part of the experience.

Is J & K 1965 good? I can't really tell. Is it worth a $50 ticket? It depends—you'll get more out of it if you commit. Will you simulate a heroin high? Yep, and in public, surrounded by small children. Want in? Get tickets here, but be sure to wear comfortable shoes and check your giggles at the door.

#immersive theater
#j & k 1965
#LES
#needle park
#original
Do you know the scoop? Comment below or Send us a Tip