Inside The Worlds Fair Nano: The Future Is Cricket Flour, Lulzbots, And VR-Synced Fleshlights

In the future, we’ll commute on electric skateboards, eat apples that never go brown, and drink, like, a lot of Soylent. Or so it would seem from the vision of the future on display this past weekend at the Worlds Fair Nano.

Currently in its second year, the futurist festival brought together tech talks, a Drone Zone, immersive VR games, and an electric skateboard highway together under the roof of the Brooklyn Expo Center.

Under a banner that read “Future of Food,” fair organizers handed out free, unlimited bottles of Cacao Soylent from a stash of Soylent boxes piled mountain-high. On a table nearby, the snack company Seek showed off a glass terrarium filled with live crickets. Beside it stood a mason jar filled to the brim with dead crickets and a coffee grinder that pulverized their corpses into “cricket flour,” the secret sauce that gives the company’s Cinnamon Almond Crunch Granola 7G of protein per serving.

“They’re killed humanely—we freeze them,” Seek’s founder, Robyn Shapiro, told me. A man beside me tried a sample. “Impressive, I can’t taste the cricket at all,” he said. Reluctantly, I took a bite and immediately downed it with Soylent. My take: the taste was fine, but if you’re going to make granola from crickets, don’t use anything crunchy.

Nearby, I sampled Arctic Apples' dried apple slices, genetically engineered to never turn brown. They were turning brown. (A rep from the company clarified that the brownness was caused by the drying, and that the fresh apples do not brown.) 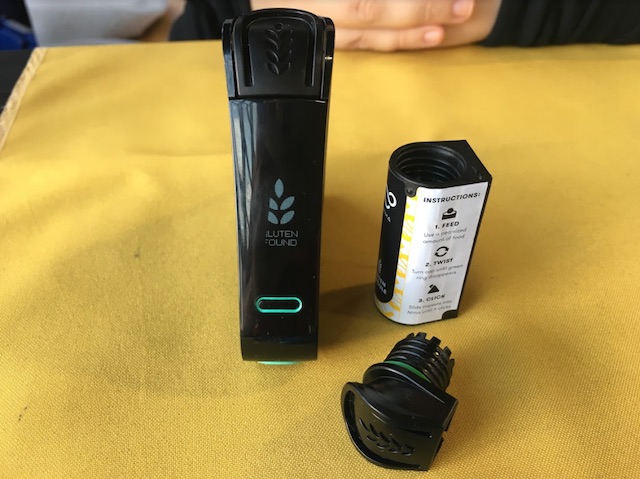 Over by a group of food electronics companies, I found one of the festival’s most practical future food innovations: a $199 portable gluten sensor called Nima. Users place food samples in disposable cartridges about the size of a C battery. Custom-engineered antibodies inside them bind to gluten molecules in food, which the sleek, triangular Nima sensor detects within 2-3 minutes. At around $5 per one-time-use capsule, the system isn’t cheap, but the price point could be right for the company’s next, possibly life-saving device, slated to launch this winter—a portable peanut sensor.

Next to Nima, I discovered PicoBrew's Pico Model C, a Keurig for homebrewed beer. About the size of a large coffee maker, it converts “PicoPaks”—custom blends of hops and grains that match the recipes of over 150 breweries (like a Dunkin Donuts K Cup)—into five liters of beer that’s fermented, carbonated, and ready to drink within 10-12 days. 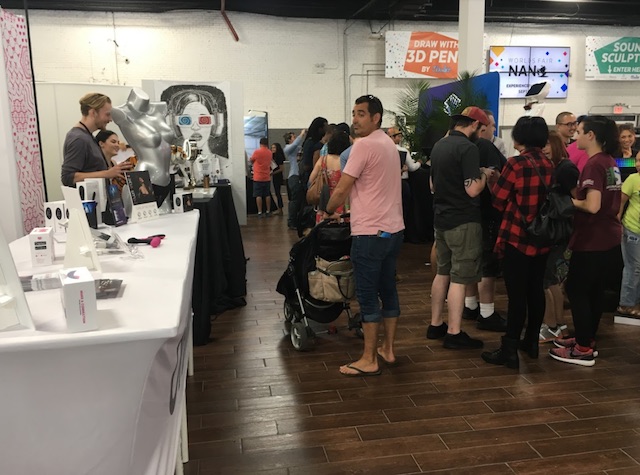 A 500-foot electric skateboard “mega-track” separated the Future of Food area from the VR displays, where fairgoers zipped by on Boosted, Action, and Mellow boards.

“Is this hard?” I asked a sales rep from Mellow who handed me a helmet.

“Incredibly easy,” he replied. “Have you skated before?”

“Then incredibly hard,” he said. Mellow’s core product is “Mellow Drive,” a device that transforms ordinary boards into electric ones (retail 1,427.73 Euros). To control my speed, I used a Wiimote-like device tethered to my wrist. Aside from turns, skating with Mellow wasn’t too hard, and if not for the price tag, I might have bought one.

Past the skateboard highway, in a VR demo sponsored by Samsung, I rode an impressively lifelike virtual rollercoaster while wearing a Gear VR headset and sitting in a synced motorized chair. In other booths, guests played VR games in haptic feedback suits and on omnidirectional treadmills.

Sprinkled amongst immersive gaming rigs, startups demoed more business-minded applications of VR and 3D modeling: WiseMind showed off a block-balancing VR game designed to treat chronic pain and stroke rehabilitation patients (it’s currently in clinical trials). 3dapartments.nyc showed 3D models of over 150 apartments available for rent in Brooklyn. Kabaq rendered food in augmented reality. In a demo video playing a display monitor, I watched a toddler ram herself into an iPad in pursuit of a digital burger. I felt glad to have been born in a simpler time.

At the Scan-A-Rama 3D Portrait Studio, a man called “The Great Fredini” scanned visitor’s heads, printed them in red and blue 3D printer filament, and mounted them on decapitated Lego bodies. Next to a display for a mini Epilog laser cutter and a smartphone-controlled cat treat dispenser called Kittyo, a young boy and his father admired geometric sculptures created by the 3D printer Lulzbot. 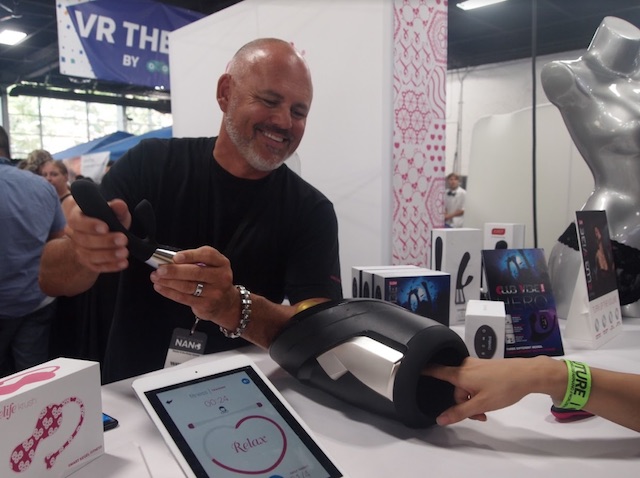 Behind them stood not one but three booths for sex toys.

So this was the future. On the way out, I grabbed one last Cacao Soylent for the road, which was delicious compared to its original powdered form. I didn’t know we’d come so far.