Over the weekend, while having dinner at The Roosevelt Hotel, someone told me, "There's a secret train tunnel under the hotel that Roosevelt used to use." This is not exactly true, I soon discovered, but it turns out there is a tunnel under the hotel, which was used by the public as a passageway that connected to Grand Central Terminal. (This is entirely separate from the train tunnel under the Waldorf-Astoria, a better known "secret"—that one was in fact used by FDR.) Below is what photographer Sai Mokhtari and I learned over the past few days through a series of discussions with bellhops, hotel employees, the manager of a men's retail shop, the MTA, and some serious digging around on the internet.

The hotel opened in 1924—five years after Theodore (its namesake) died, and 9 years before FDR would take office. It's unclear when this passageway opened, and it's doubtful FDR ever used it, but in 1949, LIFE magazine made mention of it: "Grand Central Terminal... completed in 1913 after 10 years' labor which included 3 million-cubic-yard excavation reaching a depth of 65-feet, is the center of a group of other buildings. Some of these (the Roosevelt, Biltmore and Commodore hotels, Yale Club, Graybar and Chrysler Buildings) are connected to the station by underground concourses." Here's a map showing at least some of those hotels and their connection to GCT: 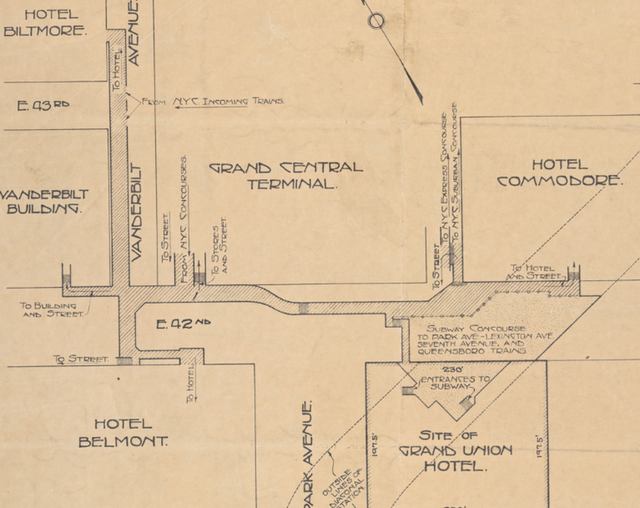 The article goes on: "It is thus the central link of an entire business district, and a stranger, detraining in the station which fronts on 42nd Street, may wander into a passage and presently come up, like a disoriented mole, in the lobby of the Roosevelt Hotel six blocks away." In this detail you can see the Hotel Commodore passageway mapped out: 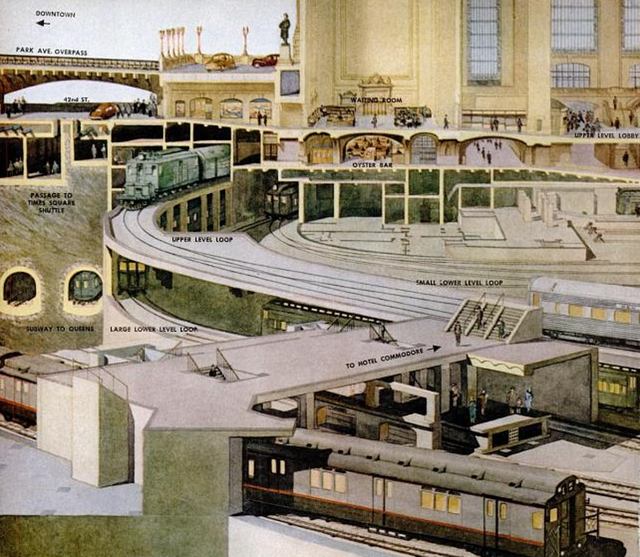 Over the weekend I asked a hotel guide where the secret tunnel was, and was taken down the stairs off the grand lobby to a corridor that contains an elevator bank and some shops. It looks almost like an old subway entrance, and our guide told us it used to lead to a tunnel, which is now closed off. Through the rolling metal gate (which was closed when I was originally taken there) you can see a set of steps, along with some signage for Sarar's, a clothing store located on the same block as the hotel.

The MTA's Marjorie Anders told us yesterday, "The stairs in the photo lead from the passageway to the basement of the Roosevelt." It's unclear if the stairs ever led anywhere else, the MTA has yet to clarify or confirm the hotel's claim that this used to be the entrance to a tunnel. 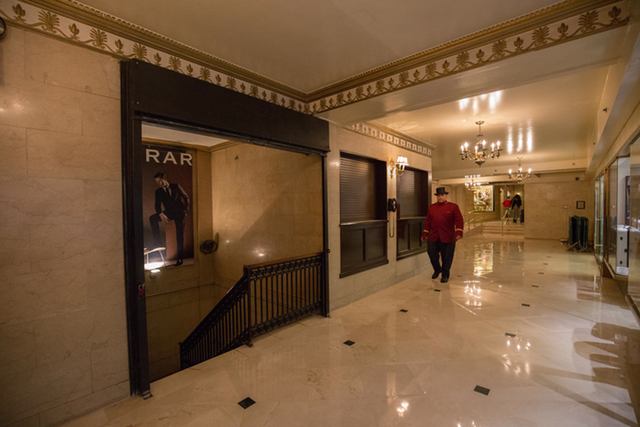 A hotel employee took me here when I asked where the old tunnel was. This is below the hotel's lobby. (Photo by Sai Mokhtari/Gothamist)

This weekend, Emre Cehiz, Sarar's store manager, told me he had no idea if their store was using an old underground passageway as a stock room. He did say: "As far as I know, that space is dedicated to Sarar since we opened the store at Madison and 46th Street in 2008. I'm not sure how but when you're in the stock room, you can also hear Roosevelt Hotel employees behind thin walls dividing our stock room and their resting room. I am not an expert but I guess the space is divided and given separate entrances."

Yesterday, Cehiz brought our photographer down the stairs to show us the space (we were still hoping to find a subway tunnel!), and you can see those photos in the above gallery. But then something else happened... as Mokhtari was roaming around, a helpful hotel employee named Steve introduced himself and showed her to another closed off area—this is an entrance to the now abandoned passageway. 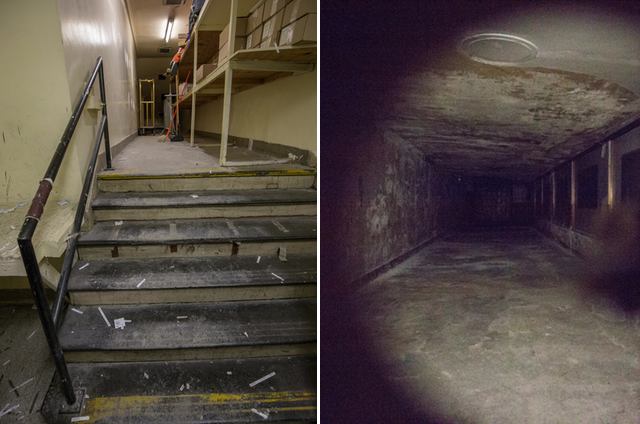 This tunnel is behind closed doors, just off to the side the hotel's lobby, above the entryway to the other tunnel. (Photo by Sai Mokhtari/Gothamist)

Mokhtari reported back: "The yellow stripe on the stairs is from when this was a tunnel that led into Grand Central. This area ends at a hallway that is now boarded up and locked, but Steve said that before they boarded this up about a year ago, you could walk all the way through this tunnel into Grand Central Terminal. The other end of it at GCT has been gated and locked for over a decade, so you couldn't actually enter the station, but you used to be able to walk all the way up to the gate at GCT."

Steve then walked her across the street and into Grand Central to the other end of this tunnel (now also boarded up). Ta-da! 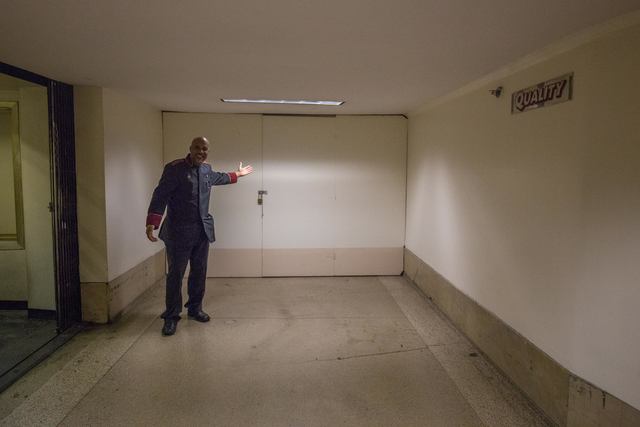 Steve outside of the boarded up tunnel, from the Grand Central side. (Photo by Sai Mokhtari/Gothamist)

Steve is standing at the GCT entrance to the passageway in the above photo, right near where Quality Transportation runs out of today.

The MTA's Marjorie Anders confirmed that "the passageway [from the hotel] used to continue under 45th Street southward to provide direct access for hotel guests and the public to/from Grand Central Terminal." However, she also noted that "the corridor houses the watch shop, the tennis restringing shop and a messenger service." Here's the area (in the below photo) she is referring to on the Grand Central side—which is different from where Steve took our photographer yesterday. 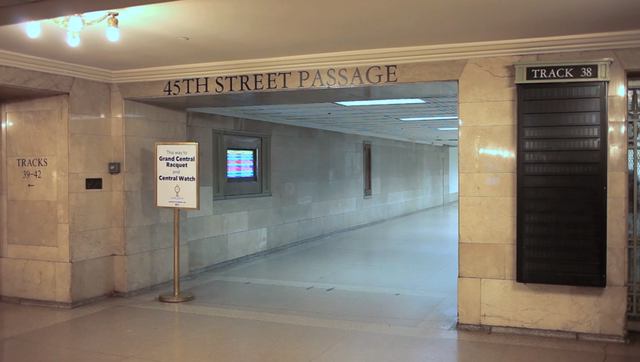 Anders explained there was more than one entry/exit to the old passageway, however: "This truncated corridor does provide direct access to/from the terminal to 347 Madison (the old MTA HQ) and 52 Vanderbilt as well as a staircase that comes up on the south side of 45th Street directly across from the main entrance to the hotel." She added, "They closed [the passageway] in the 1970s or early 1980s, when people were sleeping there."

#abandoned
#grand central terminal
#passageway
#the roosevelt hotel
#underground
#original
Do you know the scoop? Comment below or Send us a Tip