The home of the Tabernacle of Prayer church in Queens is physically divine: one of five incredible "Wonder Theatres" opened by the Loew’s chain in the NYC area in the 1920s, the enormous cinema looks like a place where God or Gods would feel comfortable kicking back and watching a double feature. It's the apotheosis of movie theaters, and on Saturday the church opened it for a rare tour.

Originally called The Valencia Movie Palace, the ornate theater opened in Jamaica, Queens in 1929, presenting a mix of movie screenings and vaudeville performances. Here's an old photo of the theater walls, which are decorated like a movie set recreating a Spanish town. 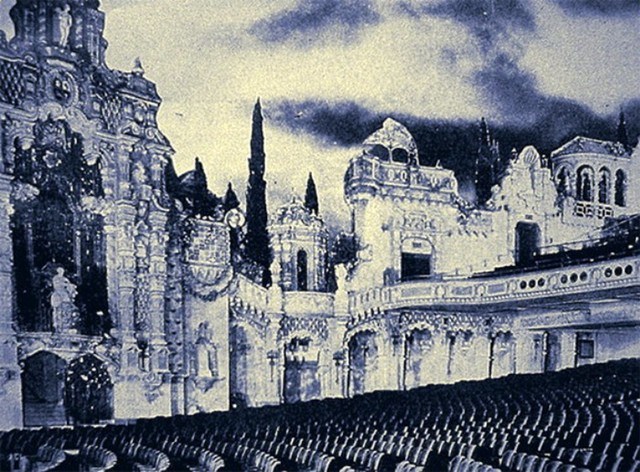 In 1935, it dropped the live shows and became strictly a movie house known for premiering new releases weeks ahead of other theaters in the country. Here's some more background on the Valencia, from Cinema Treasures:

The Loew’s Valencia Theatre was the first of the five Loew’s ‘Wonder’ Theatre’s to open. It was equipped with a Robert Morton ‘Wonder’ organ of 4 Manuals / 23 Ranks.

The auditorium is in Atmospheric style, decorated in a mix of Spanish Colonial and pre-Columbian styles. Seating was provided for 3,554 in orchestra and balcony levels.

Early in 1935, stage shows were dropped and replaced by double features. Until the 1960’s, the Loew’s Valencia Theatre was the most successful movie theatre in Queens, due partly to its location in Jamaica, then the shopping hub of Queens and Long Island... It closed as a movie theatre in May 1977 with the movie “The Greatest”, and has since served as the Tabernacle of Prayer for All People church.

The Robert Morton ‘Wonder’ organ has found a new home in the Balbao Theatre, San Diego, California, where in 2008 it was installed and refurbished at a cost of $1 million. It debuted at the Balbao Theatre in February 2009.

The Loew’s Valencia Theatre was placed on the National Register of Historic Places in 1999.

The 3,440-seat theater is largely intact, with the "stars" still twinkling in the ceiling and the lions roaring out from the walls. Chandeliers have been added to the theater's "sky" however, and the backstage dressing rooms are now used by the church for community outreach programs. And what were once gods and goddesses in the proscenium were transformed into angels when the church took over. So it goes.

#loews queens
#valencia theater
#original
Do you know the scoop? Comment below or Send us a Tip