Inside The NYPL's Major Stonewall Exhibition The Stonewall uprising wasn’t the beginning of the LGBTQ liberation movement—it wasn’t even the first (or last) bar protest. An exhibit at the New York Public Library’s Stephen A. Schwarzman Building, “Love and Resistance: Stonewall at 50,” uses documents, publications and intimate photographs to trace what led to the riots—and what happened in the decade after.

“Stonewall was a turning point, not the start of a revolution,” said Curator Jason Baumann. “It’s activists who really used it to draw a line in the sand and use it as a way of drawing a new generation of people into gay activism.”

The exhibition is broken into four themes: “Visibility,” featuring photos of LGBTQ life; “Love,” which looks at couples and intimacy; “Pride,” about the creation of alternative spaces through nightlife, marches, community centers and the alternative press; and “Protest,” a chronological progression of marches and other activism.

Baumann said that the first protests were often about gay people wanting to serve during the military—even though the 1960s and ‘70s were a time when straight people were trying to escape the draft. “It was about the right of employment generally," he said, pointing to a 1965 image by Kay Tobin Lahusen of men in suits and women in skirts carrying signs that read ”Sexual preference is irrelevant to Federal employment." He added, "I mean, if the federal government can discriminate against somebody for being gay, then that sets the tone for the rest of society. We underestimate how the right to employment in a capitalist society is really the right to exist—to eat, to have a place to live.”

It was forbidden for federal workers to be gay until 1975 (the military ban for gays and lesbians wasn’t lifted until 2011). Transgender people weren’t protected against federal hiring discrimination until 2014, and just this past April, their ability to serve in the military has been strongly curtailed by the Trump Administration. 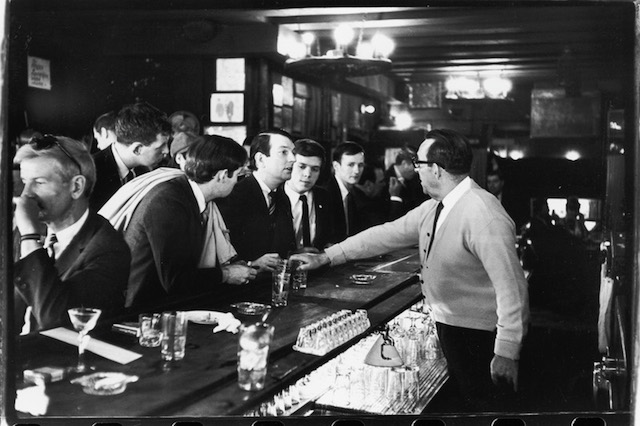 Baumann said another, half-forgotten aspect of gay life in the 1960s that people today might be unfamiliar with is that it was illegal to serve a gay person a drink until 1966, after the small but significant Sip-In protest at Julius bar in 1966. A photo in the exhibit by Fred McDarrah shows a bartender with his hand over the glass of a man in a tie sitting at the bar. The activists chose Julius' after several other bars served the men without problems (at one place, they were even offered a free round). The Sip-In worked. The Human Rights Commission declared that gay people had the right to be served in bars, and told the State Liquor Commission could no longer declare that merely being gay was the equivalent of disorderly conduct.

The exhibit includes a wealth of documents and photos from other protests, sit-ins and marches, too, including the 1970 Christopher Street Liberation Day March, which later became the Pride parade. There are also political publications, drawn from around 3,000 titles in the library’s collection, which helped to keep activists in touch before the internet. One from 1973 has a cover image of a lavender dinosaur, which was used by lesbian activists to protest sexism and the lack of gay inclusion at the American Museum of Natural History. Another includes a 1960s ad from the Mattachine Society of New York, one of the first gay civil rights groups (and the Sip-In organizers), which shows a drawing of a zebra with spots and reads, “Homosexuals are different...but….we believe they have the right to be.”

Stonewall led to the formation of more militant activist groups like the Gay Liberation Front and others that were seeded across the country. The library has thousands of documents from those groups, including police permits for marches and organization files. But Baumann’s favorite parts of the collection include a comprehensive inside look at drag culture and the burgeoning transgender movement, plus a manifesto calling out homophobia in the Young Lords and the Black Panthers.

There are also plenty of photos documenting dancing and joy, tenderness and love. There’s a Lahusen picture of her partner, Barbara Gittings, who organized the New York chapter of the lesbian rights group Daughters of Bilitis, peeking out from behind a shower curtain, her hair still sudsy with shampoo. And another of Jack Baker, his arm slung around Michael McConnell—they were among the first couples to fight for marriage equality, applying for a license in Minneapolis in 1970.

But even those sorts of photographs were especially political, back when gays and lesbians could be fired, or lose their children if they came out.

“It’s a question of what’s political, right?” Baumann said. “Love and celebration happen in a political context. And being able to express yourself in that way is a political issue.” 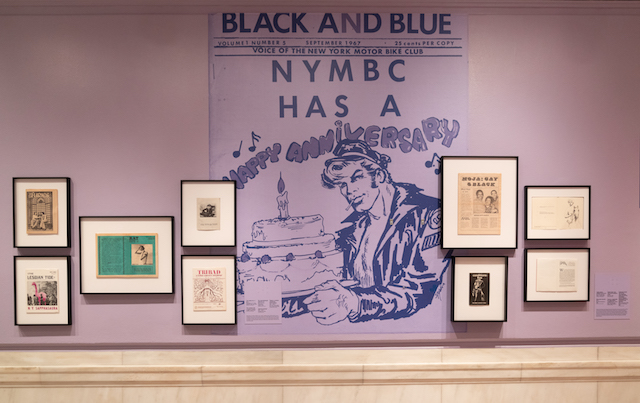 Stonewall 50 is open at the NYPL's Stephen A. Schwarzman Building through July 13th. On June 21st, they will host a Pride After Hours event—more details here.

#nypl
#pride month
#stonewall
#original
Do you know the scoop? Comment below or Send us a Tip
A new Gothamist is coming! We’ve moved comments over to our beta site. Click here to join the conversation and get a preview of our new website.