Inside The Mad Men Exhibit At Museum Of The Moving Image Don Draper was born on a piece of paper that Matthew Weiner held in his hand sometime in the 1990s, long before we ever met him on Mad Men for the first time in 2007. Pieces of scrap paper and loose leaf with Weiner's scribblings are the first thing you'll see when you enter the Museum of the Moving Image's fantastic exhibit that's opening on March 14th, just under a month before the show returns for its final 7-episode season.

"Arrogant," "damage," "hope," "scared," "sex," and "secret" are amongst the words that jump out from one particularly important 3-page note you'll see upon entering—it gets its own framed section, and includes a loose timeline at the end. Weiner himself is notorious for being secretive about plotlines, but that didn't stop me from trying to find spoilers in between the lines... 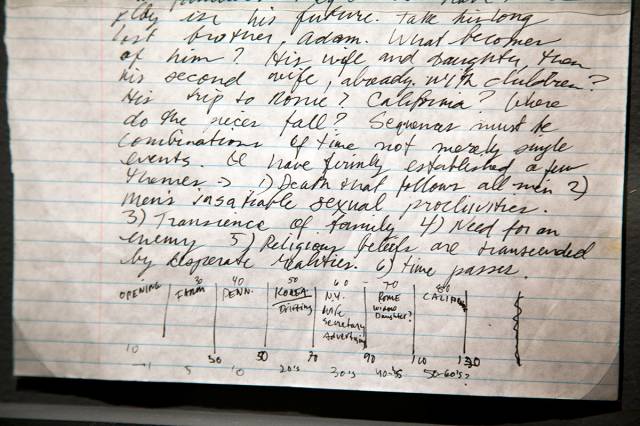 The exhibit is small, but there's a lot to see—sets, costumes, props, and the actual writer's room (which has a mid-century feel itself) were all driven to Queens from Los Angeles, reconstructed, and meticulously put back together with extreme attention to detail.

Along with notes, you'll find everything that defined the show, and an era: from Don's cigarettes and sunglasses, to Joan's blood-stained dress from the lawn-mower incident in Season 3, to Betty's cookbooks, to THE carousels, to Jiffy Pop and Velveeta.

The exhibit will run through June 14th, and on top of all of this, there will be appearances from Weiner and some cast members, as well as a screening series showing the ten movies Weiner made everyone on the cast and crew watch.

#mad men
#matthew weiner
#museum of the moving image
#original
Do you know the scoop? Comment below or Send us a Tip