Inside The Costume Institute's CAMP Exhibit At The Met In what is perhaps the most playful Costume Institute exhibit we've seen in years, Camp: Notes on Fashion opens this week at the Metropolitan Museum of Art, and was celebrated Monday night at the annual Costume Institute Benefit (a.k.a the Met Gala). However, the show's theme—a complete turnaround from last year's more buttoned-up, Catholic-inspired fête—had caused some confusion, which Anna Wintour recently addressed in an interview, saying, “The only advice I ever really give to [Costume Institute director] Andrew [Bolton] is, whatever the title of the exhibition is, make sure that everybody understands it immediately." She then admitted that this year's theme "has created a little bit of confusion." Presumably, some conjured up images relating more to L.L. Bean than Lady Gaga (one of the co-chairs for the benefit, along with Alessandro Michele, Harry Styles, Serena Williams, and Wintour), though most seemed to figure it out prior to stepping on to the red pink carpet last night.

So, what even is Camp? It's a lot of things, often hitting notes of "irony, humor, parody, pastiche, artifice, theatricality, and exaggeration," according to the show's catalogue. Mostly, it's fun and feels a little... off. Below, a quick history of the somewhat elusive concept, best described by Susan Sontag in 1964 as "a seriousness that fails... the love of the unnatural... the exaggerated." (Sontag's essay "Notes On Camp" served as inspiration for the theme.)

The exhibit itself "will explore the origins of camp’s exuberant aesthetic and how the sensibility evolved from a place of marginality to become an important influence on mainstream culture. [Sontag's essay] provides the framework for the exhibition, which will examine how fashion designers have used their métier as a vehicle to engage with camp in a myriad of compelling, humorous, and sometimes incongruous ways."

Bolton says "the exhibition will advance creative and critical dialogue about the ongoing and ever-evolving impact of camp on fashion." It will feature around 250 objects, from womenswear, menswear, as well as sculptures, paintings, and drawings; these will date back to the 17th century and bring us through the present.

The show’s opening section will position Versailles as a "camp Eden" and address the concept of se camper—"to posture boldly"—in the royal courts of Louis XIV and Louis XV. It will then focus on the figure of the dandy as a “camp ideal” and trace camp’s origins to the queer subcultures of Europe and America in the late 19th and early 20th centuries. 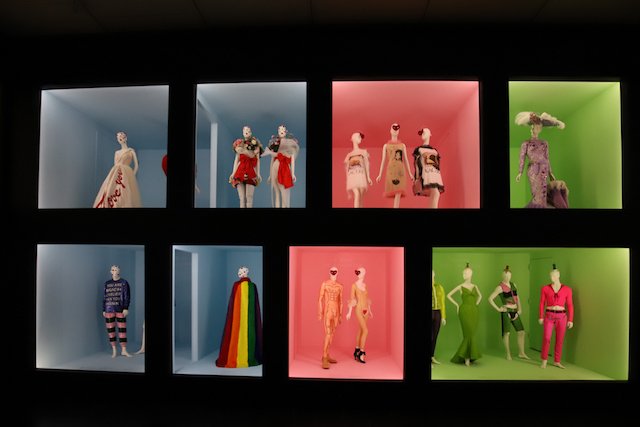 The exhibit feels a little smaller compared to prior years, but it's well done and whisks you through a timeline of camp. Our photographer Sai Mokhtari noted, "I went in thinking I had a solid understanding of the concept of camp, and I came out feeling like I learned a lot, and added a lot of depth to what I thought I knew." She also called the show, "a feast for the eyes." Click through for a preview.

A member preview will be held on Tuesday, May 7th, and the show will officially open on May 9th (running through September 8th).

#camp
#camp notes on fashion
#costume institute
#metropolitan museum of art
#the met
#the met gala
Do you know the scoop? Comment below or Send us a Tip