The long abandoned Empire Stores complex on DUMBO's waterfront, situated in Brooklyn Bridge Park between the Brooklyn and Manhattan Bridges, has been in the early stages of a renovation. Upon its completion in late 2015, the old coffee warehouse will be home to a number of stores, a rooftop beer garden, office space, and some restaurants. There will also be a "coffee/Brooklyn waterfront museum." 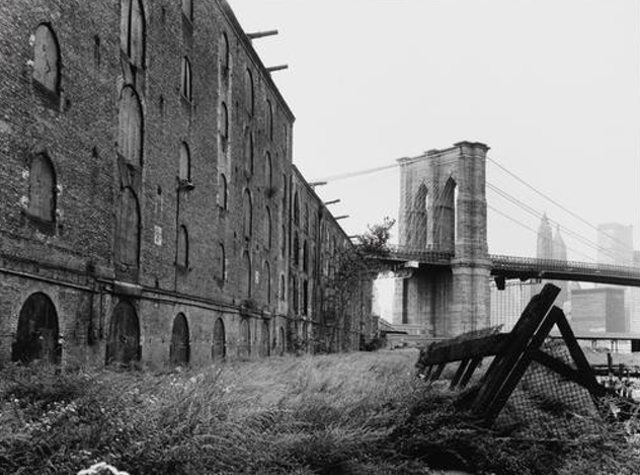 The warehouse in 1975. (Courtesy of the Museum of the City of New York)

Before all that, we took a look inside the space at it undergoes both its renovation, and a restoration—we're told "the design plans balance the future of technology and the preservation of the building's rich history as a Civil War era coffee warehouse, a space once occupied by modern coffee industry pioneer, Arbuckle Coffee Roasters."

What will stay? "The building’s 450-foot façade has been restored, and original details such as hoist wheels and shoots for transporting coffee, as well as existing stacked stone schist walls and pine pillars have been preserved and incorporated into the overall design." The renewal of the space will include a passage carved out to create a central courtyard, which will be surrounded by shops and restaurants. Yes, kind of like a... mall. 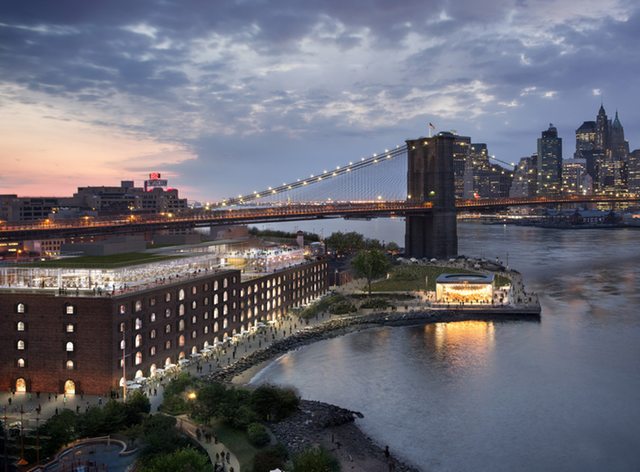 Up top the roof will be a mixture of glass and grass, with a glass addition "installed on the rooftop creating two additional floors of office space with 14-foot-high ceilings." Outside of that will be a public green space... and somewhere, that aforementioned beer garden.

Click through for a look at the historic space at it undergoes these changes.

#development
#dumbo
#empire stores
#waterfront
#original
Do you know the scoop? Comment below or Send us a Tip