This is the first of several dispatches from Cuba by Gothamist's Lauren Evans and photographer Tod Seelie.

It's 10 p.m. on a Saturday night in Havana, and the air outside is hot and stagnant. Dozens of frikis—the name given to Cuba's punks, metalheads, and anyone who doesn't comport with mainstream society—mill outside of Maxim Rock, a state-run metal club in the leafy neighborhood of Vedado, smoking cigarettes and waiting for the next band to go on. It's easy to tell that Maxim Rock is operated by the government: Inside, the air conditioning is blasting.

Maxim Rock is Havana's metal home—patrons will hear no rhumba or reggaeton played within its heavily soundproofed walls, a departure from nearly every other venue in the city. The frikis themselves are a diverse bunch. Many sport the long hair, tattoos, and tattered GWAR shirts you'd find in the bathroom line at St. Vitus, but plenty buck the stereotype. The lead singer of a band named Darkness Falls, tattoos covering his inspiring six-pack, wore the salmon slacks of a rich Manhattanite sipping a glass of rosé in the Hamptons. "We're lumbersexual!" declared another, gesturing toward his striped tank top and skinny jeans. 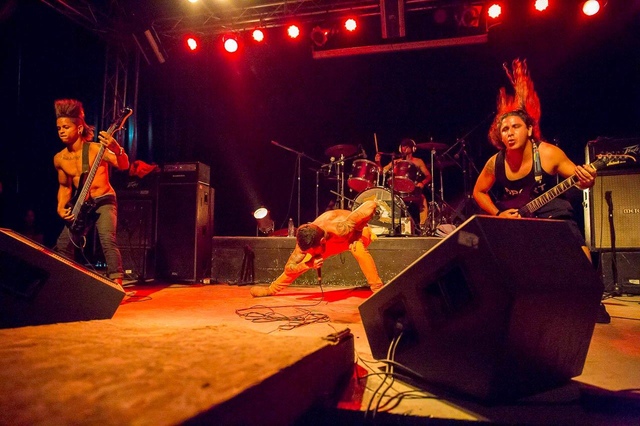 Metal took root in Cuba in the early '80s, but like so much else in the country, it's only been allowed to flourish recently. Juan Carlos Torrente, 45, front man of the death metal band Combat Noise, has been active in the scene since 1996, smack dab in the middle of the Special Period, a time classifiable as "special" only for the staggering degree of deprivation endured by the bulk of Cuban society after the Soviet Union collapsed. In addition to crippling poverty, Cubans' freedom of expression was tightly controlled by the government, and the frikis' idea of art didn't exactly resonate with the state's Minister of Culture.

"Cuba is a country of salsa music and raggaeton," Torrente, who is employed as a singer in Cuba's National Choir, told me. "For the metal people and rock people, it was very difficult to find places to play music."

The frikis eventually found a home in a place called Maria's Patio, which began as a cultural center in Havana but by the late '80s had morphed into a countercultural safehouse under the guidance of Maria Gattorno, a sharply dressed woman in her 60s, whose demeanor suggests more "polished urban professional" than "metal savior."

Gattorno, though, is not one to make snap judgments based on outward appearance—when she learned the extent to which the country was teeming with displaced metal bands, she decided to step in.

"I wanted to create an environment where they could participate," she told me outside Maxim Rock one night.

All was well with Maria's Patio until 2003, when the government shut it down for reasons that remain vague, a Cuban specialty. (Gattorno attributes its closure to structural issues; others cite its proximity to the Plaza de la Revolución, with officials having grown tired of looking at metalheads lurking around their neighborhood.)

"It’s the genre that has the hardest time, because its audience is younger people," Gattorno said, echoing Torrente's assertion that Cuba is a country of Latin music. "Metal is out of the box, and out of the box is not OK."

Maria's Patio was dead, and for years, metalheads and punks struggled to find their place. Even the park at 23rd and G in Vedado, known as a friki gathering spot, was routinely shut down by cops.

Things went along this way until 2007, when something remarkable happened: The frikis were able to organize—a notable feat in a country with little access to the internet and nonexistent free press—and petition the Minister of Culture to recognize their music.

"We said 'metal music is just music," Torrente, who is also an avowed party member, told me. "We said 'You’re the Minister of Culture—you have to help us.'"

And that, according to Torrente, is precisely what the Minister of Culture did. That year, the Cuban Rock Agency was born. Maxim Rock, the site of former crumbling movie theater, was repurposed as a venue. It's not much to look at, but it's equipped with a stage, a bar and sub-arctic A.C.—a rare luxury in the stifling Havana heat. The place was brimming with action both nights I went, with kids as young as 13 to fans deep into middle age lining up to head bang, dance and occasionally, tenuously, mosh. 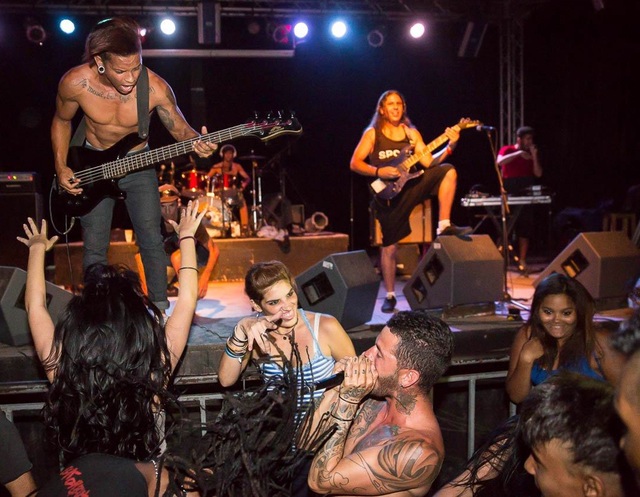 Even with the Ministry of Culture's help, gaps persist: While the Cuban Rock Agency may be responsible for such noble acts as organizing and funding metal festivals in Cuba's various provinces, musicians are still forced to make do with limited access to instruments, many of which are simply not available in the country. Those with foreign friends ask them to bring amps, synths and everything else they need to make their music. Guitar strings are rarely changed; drum sticks are taped together. The agency, it seems, turns a blind eye to the source of any new accoutrements.

And of course, anti-government lyrics remain legally sketchy. One singer told me his band's songs were deeply political, though he clammed up when pressed for specifics, offering only that he sang about society, and about the war. The war? "The war in Iraq," he clarified.

Others sing about oppression, but only in the vaguest of terms. Norbert, singer of the band The Shepal, offered the following lyrics when I asked for a sample:

This is our time
There is nothing left besides this moment.
If you feel this
Raise your fist up
For what is ours

It's ironic, of course, that a counterculture most clearly defined by its "fuck the Man" attitude finds itself kowtowing to the Man's messaging guidelines. The Cuban government may have come around on the musicality of metal—the guttural screams, the violent cymbals—but it still maintains a zero tolerance policy toward bashing the state. The lead singer of the punk band Porno Para Ricardo has been sent to prison multiple times for singing lyrics like those contained in the song "Año Sí Se Cae," which calls for protest against the "dictatorship." (It is illegal to protest in Cuba.) As such, many musicians, including the former head of the Cuban Rock Agency, have defected for the States. (In 2013, Gattorno took over as the agency's director.)

The dream, of course, is consistent with the dream most Cubans I spoke with, friki and otherwise: To be able to tour outside the country, and to make a living wage doing what they love. In order to be considered a professional outfit—which is to say, to profit from their music—metal bands must audition for and be approved by the agency. Gattorno tells me there are currently 23 such bands in Havana, though payment comes only in the form of a fractional percentage of the door's cover charge, and is not nearly enough to live on. All other proceeds, of course, go to the state.

This is a dramatic time for Cuba—the hard edge of communism is finally beginning to soften, and America's newfound tolerance of the country will send fleets of cruise ships carrying moneyed tourists to its pristine Carribbean shores soon enough. All of this bodes well for Cuban metal, and for Cuba, generally.

"Do I hope someday we can tour abroad? Of course!" the singer for Abomination Reborn tells me a few minutes before his band takes the stage. His tone is resigned, rife with the winking acknowledgement I might employ if someone asked if I wanted a free million dollars or a baby unicorn. "Our country is opening right now. Who knows, in a few years, maybe we can even do that."

#cuba
#cuba evans
#gothamist getaways
#metal
#Music
#longform
Do you know the scoop? Comment below or Send us a Tip