There's been some uproar on the Internet over the last couple of days after a longtime writer for Inside Amy Schumer went on a social media rant mocking women who attempt to call out alleged rapists.

Over the weekend, comedian Kurt Metzger unleashed a series of Facebook posts mocking "how rape should be handled." Posters were apparently trying to call out another comedian who had allegedly raped a number of women, which led to him getting banned from Upright Citizens Brigade theaters in Los Angeles, a move Metzger likened to "mob justice." So, he went after them: 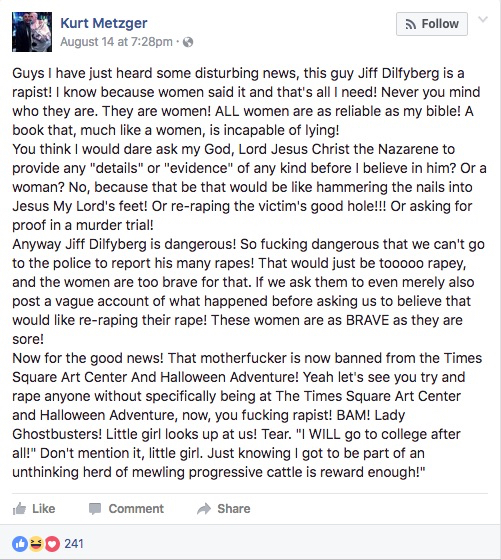 Here's what u punks can't ever seem to understand. I do not give a fuck. Your love and hate are two sides of a worthless coin.

People were understandably incensed, especially considering Metzger's had a history of harassing women online. In 2013, he allegedly harassed writers Lindy West and Sady Doyle when they criticized rape jokes, calling "a certain kind" of feminist a "cunt" on Facebook, and ranting to Official Comedy Standup about how protesting rape jokes is "selfish":

Isn't it so selfish? Rape—'cause that—that really becomes, like a—you have to fight a feminist with that shit. Which is insane, because rape—everybody gets raped... And men—literally can't talk about them. If you get raped as a man, not only is it hilarious... right? ... You know how they say "rape culture," how that's like a thing here? We don't have that here... If you think that, you're such a fucking privileged asshole, to think you live in America and there's a rape culture. You piece of shit. You'll probably never be raped here, you animal.

Metzger also allegedly said he choked an ex-girlfriend in a since-deleted Facebook post, and wrote in another post that Rihanna "deserve[d] a beating from Chris Brown," because "if you're attracted to Chris Brown you deserve what you get."

Fans of Amy Schumer were trying to get the star to respond to Metzger's latest rants, but were blocked for doing so:

so @amyschumer is blocking women who are (politely) asking her why she works w a rape apologist? that's a bad look pic.twitter.com/7AsLjFpGSR

Schumer finally broke her silence this afternoon, tweeting that she was "disappointed" in Metzger:

I am so saddened and disappointed in Kurt Metzger. He is my friend and a great writer and I couldn't be more against his recent actions.

She also tweeted that Metzger doesn't write for the show, though IMDB credits him as a writer for 39 episodes spanning from 2013 to 2016:

Kurt does not work for me. He is not a writer on my show. Please stop asking me about it. His words are not mine.

It's unclear whether Metzger is still employed with the show.

#amy schumer
#inside amy schumer
#kurt metzger
Do you know the scoop? Comment below or Send us a Tip