The back room at Secrets in Crown Heights turned into a fashion runway on Sunday night for the official launch of this year's Phoenix International Mas Band, one of the dance crews that marches more than 100 strong in the annual West Indian Day Parade along Brooklyn's Eastern Parkway on Labor Day weekend.

Models in three-foot-tall ostrich and pheasant headdresses with matching wrist and ankle feathers and sequin bras danced down the bar over soca beats, while friends and family packed along the walls taking cellphone videos. The DJ cut through the music over and over: "Take a picture, tell a friend! Take a picture, tell a friend! You don't want to be on the outside of the ropes this year!"

The West Indian Day Parade, which rivals similar summertime street celebrations in Miami, Toronto, London, and Washington D.C.—and draws thousands of costumed dancers repping West Indian countries like Trinidad and Tobago, Haiti, Barbados, and Jamaica—is more than a month away. But less-known and comparatively tiny band launches like this one are crucial for the designers, who spend most of the year constructing elaborate costumes worth hundreds of dollars, for bands like Freaks Mas, Boom Mas, and Phoenix. At the band launch, men and women get to see costumes in action for the first time. Phoenix's goal is to convince as many people as possible to buy them, and register to walk, or "play," with Phoenix on parade day.

A couple dozen models spent three hours getting their hair and makeup done before the show. Makeup artist Joel Angel did two rounds of makeup on each of them—pink and blue eyes and lips before the costume went on, and sticky gems and body paint afterwards. After dark, the models gathered at the bar for bright blue Bacardi cocktails in plastic cups, and leaned in close for selfies, brushing each other's faces with their feather headdresses.

Charles Matthew, the head designer for Shaka Zulu, a carnival band based in St. Thomas, flew to New York for the weekend just to debut his costumes. On Labor Day, he'll march as Phoenix's guest. "I can make about 15 to 20 headdresses in one night," he told us, pointing out the cowry shell detailing around his crowns. "They're my works of art." Bare-chested in a fur loincloth, Matthew led his models around the dance floor, crouching down for pictures. 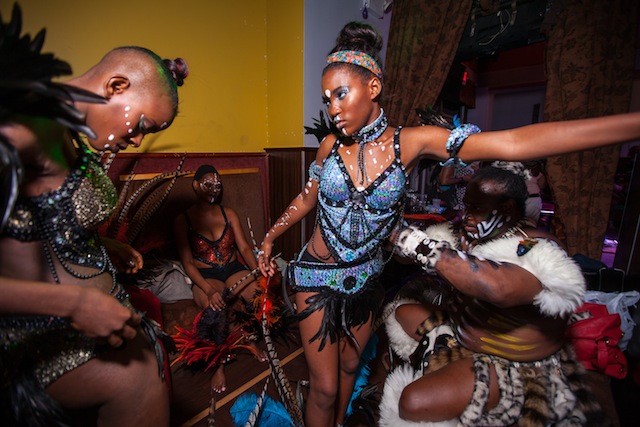 "We start making costumes for next year as soon as the parade ends," said Phoenix designer G'Wayne on Saturday, standing outside his band's storefront headquarters at 832 St. John's Place, a few blocks south of Secrets. Here, band members hang out late into the night, blasting soca and calypso on giant speakers and hand-stitching chest pieces under bright floodlights.

Malcolm Phoenix, a soft-spoken Crown Heights costume designer in a white flatbrim hat, founded the band six years ago, and can bend the wire for a feathery headdress in just fifteen minutes. "Glam," he says. "I love glam."

Phoenix doesn't have the numbers or name recognition of larger Brooklyn bands like Freaks, but his members are loyal. Caress Turner has played with the band for three years, and Sunday marked her second year modeling. Malcolm had made her orange-and-blue costume overnight, and texted her a picture of it at 6:30 that morning. "Phoenix works with you," she said. "They're like family."

Phoenix has a big Jamaican contingent, but you don't have to be Jamaican to play with them—in fact, they've got a reputation for being open to just about anyone. Like Matthew Clayborne, whom we met at the bar. He's never participated in the West Indian Day Parade before, and has no West Indian heritage, but was decked out in orange gym shorts and a matching glittery orange chest piece.

"My laundromat was playing soca one day last fall," he told us. "It changed my life." For the past few months, he's been helping wrap wire frames in fabric for headdresses. 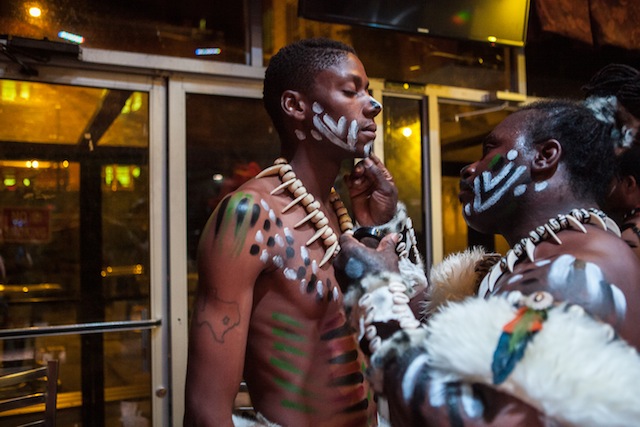 A typical lady's Phoenix costume is constructed off of a double-thick neon bathing suit, and is priced between $150 and $350. Some of the bottoms are bikini, some are high-rise with cutouts on the hips, and others are plunging one-pieces. All of them are embellished with fake gems and sparkly chains, with matching plume crowns and ankle feathers. A more expensive costume might have a backpack—fabric-wrapped wire that's bent to slip over the woman's shoulders, and frame her head like a halo.

Phoenix members are allowed to pay off their costumes in increments, often $20 or $25 at a time. "Costumes are expensive," Turner said. "As young people, some of us got jobs, and some don't. In other bands, costumes are sometimes $900. That's rent. I can't do that. But if you don't have a lot of money, Phoenix helps you out."

Esther Morgan lives in Crown Heights, and is originally from Grenada. She has marched with Phoenix as a lead player since the band was founded. On Sunday, she ran around dotting white body paint on hips, bellies, backs and shoulders. Once each model got into her costume, Morgan pulled her aside and watched her move. "Let me see you dance!" she said, nodding approvingly.

Morgan's grown son, Alex Agard, showed up at Secrets in khaki shorts and a t-shirt a few hours before the show, and sat on a bench along the wall, watching his mom get into character.

"I grew up in Crown Heights," he said. "When I was younger I used to go the parade with my mom." Agard wasn't planning to model on Sunday, but Morgan dragged him into the makeshift dressing room in the club's VIP area. The next time we saw him, he was in a massive black-feather headdress, with matching black and white cowhide around his waist, a shell necklace, and black, white, and red paint all over his face and chest. He shrugged and smiled. "I come to hang out with my mom, and this is what happens."