By
Danny Lewis
and
WNYC Staff

By
Danny Lewis
and
WNYC Staff

Dorienne Rosellini stood in the carpeted theater hallway, scanning her school schedule to make sure she could stay to see Spider-Man: Homecoming.

"I was gonna go to class, but then I looked at the syllabus and it said I could miss four days," said Rosellini, a 19-year-old criminology student at John Jay College. "I'm going to go back upstairs."

Rosellini was one of dozens of superfans celebrating the release of the newest installment in the Marvel Cinematic Universe with a movie marathon at the AMC Empire theater in Times Square. Starting at 1:30 p.m. yesterday, Rosellini set up camp in a plush red seat to watch nearly every entry in the superhero saga, culminating in an early screening of the brand-new Avengers: Infinity War.

“It’s not as packed as I thought it was going to be, so we were able to take naps,” Rosellini said.

[Editor's Note: For those wondering, the movies shown during the marathon were: Iron Man, The Incredible Hulk, Thor, Captain America: The First Avenger, The Avengers, Guardians of the Galaxy, Avengers: Age of Ultron, Captain America: Civil War, Doctor Strange, Spider-Man: Homecoming, Black Panther, and Avengers: Infinity War. While it's understandable that they left out little-loved films such as Thor: The Dark World and Iron Man 2, it is insane that they left out Captain America: The Winter Soldier, which is widely-considered to be among the top five best movies in the franchise, and crowd-pleasers like Thor: Ragnarok (whose ending leads DIRECTLY into the events of Infinity War UGH). This is only to say that whoever was running this marathon should probably be arrested for including Edward Norton's hastily-forgotten passion project The Incredible Hulk and not those other two. And we won't even get into the UTTER DISRESPECT shown toward Ant-Man, who remains the Rodney Dangerfield of Marvel superheroes.] 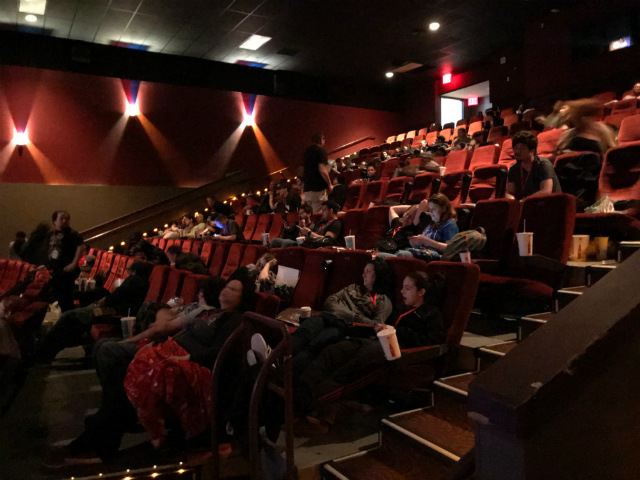 AMC’s “Avengers: Infinity War Marathon” isn’t for the faint of heart: in the decade since Iron Man launched the multibillion-dollar franchise, Marvel Studios has released 18 films and nearly as many TV shows. In an effort to make it slightly more manageable, the marathon left out several of the entries, slimming the series down to a somewhat-svelte 12 films, making for a grand total of 31 hours.

“It’s an out-of-body experience. This is amazing,” said Elizabeth Arevalo, 34. She and her husband, Chris Smith, 33, made the trip out from New Hyde Park on Long Island as soon as they got off work yesterday.

“I straight up told [my boss] I need the days off,” Smith said.

“Oh, I told them I had family coming in from Peru,” Arevalo admitted.

The pair were pumped to spend over a day in a theater surrounded by like-minded superhero nerds, but were still surprised at how much fun the crowd was still having more than 20 hours later.

“We should be all testy and stuff, but everyone’s pretty chill,” Arevalo said. 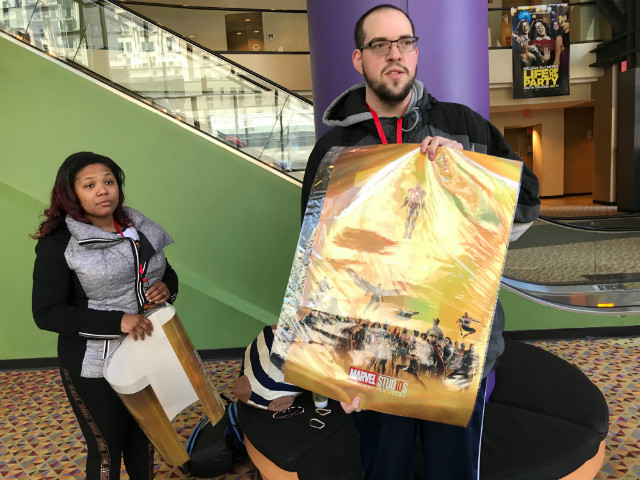 Most of the moviegoers got as comfy as possible, donning pajama pants, busting out blankets, and in some cases, even their sleeping bags. Some folks snoozed in their seats during their least-favorite films (for many, that honor goes to 2008’s The Incredible Hulk), while others sought out benches and huddled underneath the theater’s escalators for quick naps. Luckily, dropping $75 on a ticket to the marathon didn’t mean fans had to stay for the whole series.

“I walked out on Thor because I needed actual food,” said Joseph Vargas, 20, of Brooklyn. “And after Civil War, me and [my girlfriend] just took a walk. We ate and walked around, just for some fresh air. Not just ‘cause it’s hot in there, but because of the people in there. Some people just stay in there and don’t come out.”

Despite bleary eyes and a slight case of cabin fever, for the most part, the fans were pumped for the culmination of a decade of superheroes brawls. Even if they had to put up with some snores along the way.

Danny Lewis was a reporter and producer at Gothamist and WNYC.