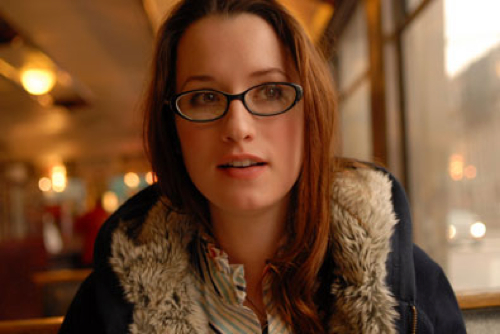 Staten Island singer/songwriter Ingrid Michaelson found fame through the small screen before hitting airwaves nationwide. Last year one of her songs was featured in the season finale of Grey's Anatomy (video), only to be followed by another one of her songs being picked up for an Old Navy ad (video). Needless to say she went from getting write-ups in the Staten Island Advance, to getting them in the NY Times.

With plans to leave the Island to further conquer the world, she plays a sold out show at Webster Hall this Friday. We recently asked her some questions...and found out she's a fan of brevity.

Last year your songs were heard on both an Old Navy commercial and an episode of Grey's Anatomy, which came first?
Grey's came first. A music supervisor found me.

How were you approached by both outlets?
On MySpace.

How long were you making music before all of this happened?
About 4 years. I was doing theatre before then.

What clubs were you playing in New York before taking the stage as headliner at places like the Bowery Ballroom?
The Knitting Factory, The Bitter End, Rockwood Music Hall, CBGBs.

What is the music scene like on Staten Island?
Small but very supportive. All genres.

How has the community there embraced you since your success?
I get write ups in the local paper (the Staten Island Advance) a lot!

Do you think you'll stay on Staten Island?
I plan on moving to Brooklyn so I am still near my family.

What's next for you, are you working on anything new right now?
I am touring like crazy and writing a lot. My next album will come out beginning of next year.

Please share your strangest "only in New York" story.
I saw someone poop on the sidewalk!

Given the opportunity, how would you change New York?
More garbage cans. Seriously. I have thought about this before. They are
always overflowing. People want to deposit their trash in the can but they
are always too full. More trash cans.

Under what circumstance have you thought about leaving New York?
The rent is too high.

What's your current soundtrack? Are there any New York bands you've been enjoying lately?
'Throwing Punches In The Dark' by Matthew Perryman Jones. The Fireflies, from Brooklyn! They are awesome.