Last month, Mayor Bill de Blasio proposed legislation in line with his goal to make New York City the country's "fairest" metropolis: Businesses with five employees or more would have to offer two weeks of paid vacation time every year. According to some local business owners, however, the requirement would endanger merchants who already run on paper-thin margins, placing disproportionate strain on mom-and-pops that simply can't afford it.

In an open letter to the City Council, Rebecca Fitting and Jessica Stockton Bagnulo, the owners of Greenlight Bookstore—an indie book vendor with locations in Fort Greene and Prospect Lefferts Gardens—urged lawmakers to consider some adjustments to de Blasio's proposal. They fear that the cumulative strain of so many guaranteed benefits, however commendable those benefits appear in theory, may be too much for small shops like theirs to bear.

"The following things have been introduced over the past five years: paid sick leave, family leave, predictive pay, and minimum wage hikes," Fitting told Gothamist in an email. "Of course we want to give our employees perks and benefits but our margins have been stretched thin by all these changes. We worry about the long-term ability and sustainability of small businesses like ours who are all navigating this rapid escalation."

The mayor's proposal, which has not yet been taken up by the City Council, involves offering workers paid time off after 120 days of employment, on top of the five paid sick days most of them are already eligible to receive. At least 20 countries worldwide already use this model, as the Washington Post initially reported, and predictably drew criticism from Republicans when de Blasio announced it.

But Greenlight's owners don't take issue with the concept of guaranteed PTO for their workers; rather, they question the financial reality—there is a reason, after all, that the number of independent booksellers in Manhattan has dropped from over 350 in the 1950s to just 79 today. In their letter, and speaking to Gothamist, they emphasized their support of providing their approximately 40 employees with "a fair and inclusive workplace and a good quality of life," but say that the path to a fairer city cannot involve "simply dropping" policy "in the lap of its local business owners" who are already struggling to figure out how they will pay their climbing rents, satisfy the obligation to pay the newly realized $15 minimum wage, and compete with bigger outfits that have cannibalized profits.

Amazon, for example, has famously eaten up so much of the retail market that even big book chains have shut their doors. Part of Amazon's appeal lies in convenience: Your order comes straight to your door, without you having to comb local shops for the title you want. But books also tend to be cheaper there, and that is a difficult equation for indie booksellers to balance. Greenlight's payroll exceeds the combined rent that Fitting and Stockton Bagnulo pay on their two storefronts, and "while payroll operating costs have risen rapidly," Fitting explained, "the price of books remains the same." Which is to say, their profit margins don't leave much room for extra expenses.

That the mayor recently helped cut a controversial deal to bring an Amazon campus to NYC—a deal that seems to have hinged on New York offering up roughly $3 billion in tax cuts and incentives—galls Fitting and Stockton Bagnulo, who write that "local businesses have been asked to give more and more: paid sick leave, quickly escalated minimum wage, and now potentially paid vacation," all without adequate time to adjust to rising costs. "At the same time, Amazon is being offered massive financial incentives before hiring a single local worker or adding a penny to New York's infrastructure."

"Don't get us wrong: we think all New Yorkers—indeed, all humans—deserve fair pay, benefits, and a good quality of life," they wrote. "But in the interest of worker fairness, de Blasio seems not to have considered fairness to local businesses." 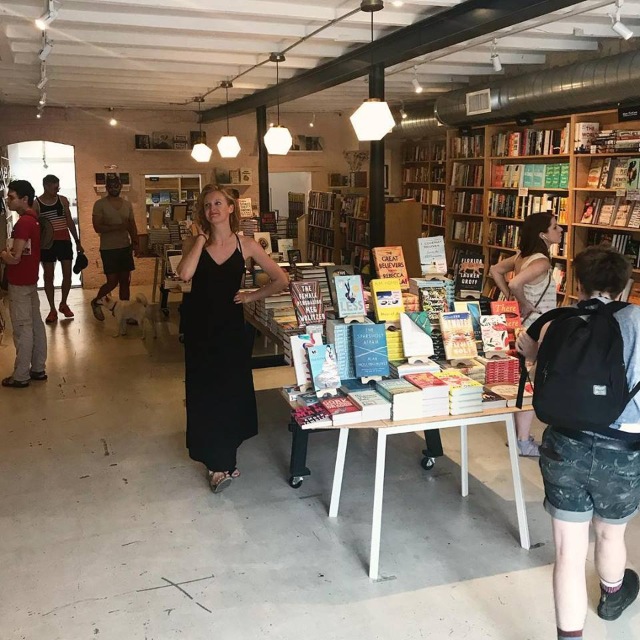 De Blasio spokesman Raul Contreras told Gothamist that the Amazon controversy should not be lumped together with paid vacation. Amazon, Contreras said, would receive "subsidies from the state and city level. From the city level, they got the normal subsidies that any other business would have received if they had developed there."

Further, he noted, paid vacation (as de Blasio envisions it) would proceed along the same lines as the mayor's 2014 expansion of paid sick leave. "Back then, businesses were voicing the same concerns [about the Earned Sick Time Act] they are now," Contreras said. But a 2016 report indicated that, of 352 employers surveyed, 85 percent said the policy had no effect on their overall business costs, and most business owners who balked that trend saw costs rise by less than three percent. Sick leave did not seem to translate to higher prices, hiring reductions, or slashed hours.

"I truly believe businesses at the end of the day are going to be able to adapt to this," Contreras said of the paid vacation proposal. "At the end of the day, [we] are working in this new era where technology is forcing us to work longer hours, work harder, and that all has an impact on workers' personal health, workers' moral, and productivity."

And yes, part-time workers cobbling together a livable wage in New York must often take on multiple jobs, working more hours than their full-time counterparts to afford basics like rent, food, health insurance, child care, and transportation costs, not to mention paying down whatever student loans they might have taken out. Even at $15 per hour, that will prove an untenably tall order for most people, and it will mean that missing even a day's worth of earnings—whether for religious observance, or a personal crisis, or the simple fact of mounting exhaustion—becomes prohibitively expensive.

"This seems like something that is necessary," Contreras added: "A moment to say, 'I'm going to take a day off and focus on me, take time to disconnect, be prepared, come back and be as productive as possible'... without having to sacrifice pay."

Still, Greenlight's owners are not alone in their worries about the real-life implication of such a policy. In an email to Gothamist, Colleen Callery—marketing and communications director for Books Are Magic in Cobble Hill—noted that while management was "happy that the city is taking an active role to protect worker's rights, we do agree with a lot of the issues Greenlight addresses in implementing these policies and supporting small businesses."

Christine Onorati, owner of Word Bookstores in Brooklyn and New Jersey, echoed that sentiment. "Small businesses are suffering in countless ways, the costs of doing business in NYC is just going up and up, and our elected officials are focusing on big corporate money instead of small business interests," Onorati wrote in an email. "Our industry operates on some of the slimmest margins of any industry aside from groceries, and we can barely pay ourselves let alone make sure our staffs are paid fairly."

Robert Cherry, a labor economist at Brooklyn College, concurs that these are a lot of extra costs to ask small business owners to make in a short period of time. Even though benefits like paid vacation might be deserved and overdue, he noted, "piling on modest increases" in operating costs eventually forces some small businesses to make tough decisions.

Chris Doeblin, a co-owner of Book Culture—a book retailer with four locations and about 70 employees—fears those changes could be fatal. Collectively, small businesses employ roughly half of the city's workforce, but with rising costs "choking" owners, Doeblin worries that storefronts will continue to close. Criticism of an ostensibly progressive policy "doesn't mean that we don't want to raise wages and benefits to the highest level that we possibly can—that's exactly what we want," Doeblin told Gothamist. "The question is how can we make businesses like ours strong enough to make good jobs."

For small business owners worrying about new potential PTO regulations, a Crain's analysis suggests staggering employee vacations, and trying not to schedule them for busy seasons, could help limited workforces stretch resources. Employers might also raise prices, and they might lean more heavily on temporary workers ineligible for benefits. Like pretty much every other sector, small business owners nationwide have lately looked to contractors to keep things afloat, but enlisting independent workers does not make for a fairer labor landscape.

In their letter, Fitting and Stockton Bagnulo suggested a few tweaks to the proposed mandate that they believe might make it more manageable: One, that any paid vacation time policy would exempt businesses with fewer than 50 employees; two, that the city increase tax credits for small businesses, which the co-owners say would make it easier for them "to shoulder the burden of increasing costs"; and three, that the City Council involve local business owners when making decisions that will impact them.

Doeblin agrees that the City Council needs to legislate support for small business alongside expanded benefits—if local shops can't afford to maintain a workforce, the question of paid time off may become a moot point, and an ostensibly progressive effort could backfire. Book Culture employees recycle their wages back into the city's economy, he notes, and enabling entrepreneurs to keep serving their neighborhoods, keep hiring people, helps chip away at the vast income gulf that polarizes New York.

"What about having a diverse set of owners and a diverse spread of income and spending power that goes on in New York?" Doeblin wondered. "I love having vacations for everybody, I love having higher wages, and the way to get there is to strengthen the diverse business population." The task, he continued, is to work with small business owners of all kinds, to "figure out what they need that they're not getting, and how to make them grow. That's what's missing."