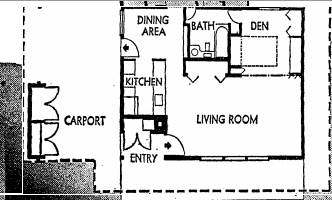 Over the weekend a longtime Montauk local was telling me that once upon a time, someone could buy a home in Montauk for around $12,000. These particular homes were called Leisuramas, and they sold them right at Macy's in Herald Square.

Meet some of the original homeowners in this clip from the Leisurama documentary, where one woman's story of walking into Macy's to buy a bra, and leaving with a house, is retold by her husband. These lucky homeowners have since sold or added on to their homes, so they don't quite look the same... but the Leisurama lives, even if beneath some extra flourishes.

The prefab structures were part of a vacation home development in the Culloden Point area of Montauk, where about 200 of them were built between 1963 and 1965. During that time they were featured at the 1964 New York World's Fair. 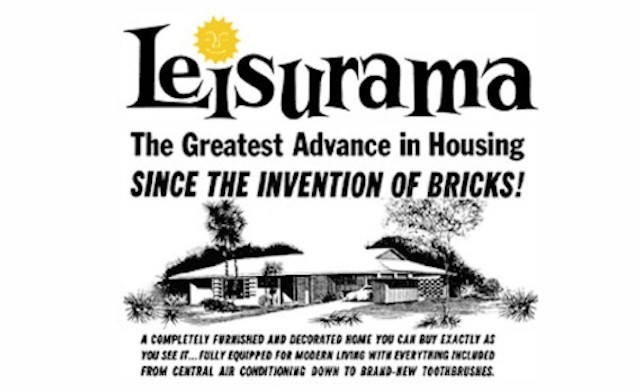 The houses came with furniture, linens, air conditioning, toothbrushes, silverware, and everything else, including the kitchen sink. The NY Times reported in 1963, when a full model was being displayed at Macy's, that they include "a living room, dining room, bath and den fitted with a Murphy wall bed. (A sofa in the living room converts to a double bed.)" More room could be included for a few thousand extra, and the Times noted that they could also be "rented at yearly rents that range from $1,600 to $1,900 with two-year minimum leases." The paper also believed these Montauk homes helped revive Murphy beds.

The precursor to these homes is what sparked the Kitchen Debate between Khrushchev and Nixon in 1959:

In 1959, Andrew Geller, vice president of the Housing and Home Components department at Loewy/Snaith, supervised the design for the exhibition, the "Typical American House," built at the American National Exhibition in Moscow in 1959. The exhibition home largely replicated a home previously built... which had been originally designed by Stanley H. Klein for a Long Island-based firm, All-State Properties... headed by developer Herbert Sadkin. To accommodate visitors to the exhibition, Sadkin hired Loewy's office to modify Klein's floor plan. During the exhibition, on July 24, 1959, Vice President Richard Nixon and Soviet Premier Nikita Khrushchev engaged in what became known as the Kitchen Debate... with Khrushchev avowing Americans could not afford the luxury represented by the "Typical American House." Tass, the Soviet news agency said: "There is no more truth in showing this as the typical home of the American worker than, say, in showing the Taj Mahal as the typical home of a Bombay textile worker."

NY Mag once recalled, "All-State used the Kitchen Debate as a marketing tool, and hired Geller" to design the Leisuramas.

Of course, today only the wealthy could afford one of these Leisurama homes in Montauk—back in 2003, the NY Times reported that the home were going for around $400,000, which has surely doubled now. You probably wouldn't even get any of this:

Flip through the Leisurama Now book, which has more photos, right here.

#flashback
#history
#leisurama
#macy's
#Montauk
#prefab housing
#real estate
#original
Do you know the scoop? Comment below or Send us a Tip