In The 1960s, One Queens Resident Refused To Sell Land To Macy's

Here's a story about how one Queens resident held out from selling her plot of land to Macy's when they wanted to build a store in the borough in the mid-1960s. Places No More tells Mary Sendek's story pretty comprehensively, noting that she was the only resident who refused the company's offer, and lived in her home on Queens Boulevard until her death.

"The story of Mrs. Sendek and her refusal to sell may have made her a local hero at the time, but up until 1965 there was really nothing unusual about her and her family. Mary and her husband Joseph were Hungarian immigrants, both families having come over around 1898. The Sendeks bought the small house on Queens Boulevard in 1922 for $4,000.

Macy’s set its sights on the Elmhust plot between 55th and 56th avenues for a new store in the early 1960′s. It was large, open, and had fairly few houses on it. It was centrally located, just a couple blocks west of Woodhaven Boulevard."

While Macy's moved forward with their planning, they ran into an obstacle when Sendek refused to sell, despite their offer of $200,000. They made adjustments to their circular design to work around her plot, and when Sendek died in 1980, "her children then sold the house to Diplomat Enterprises who elected to destroy it and put a strip mall in its place." Those ungrateful little...! 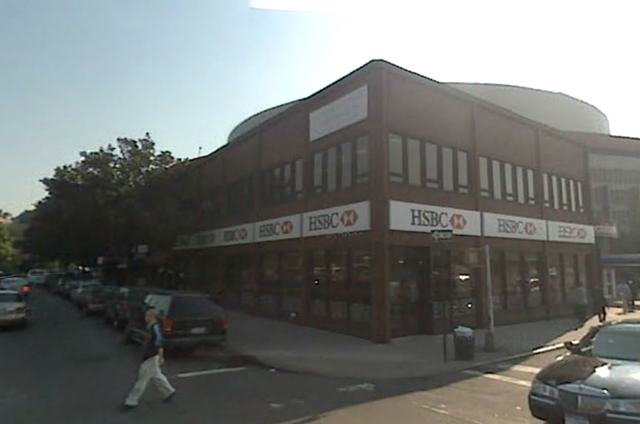 The intersection where Sendek's house once stood (via Google Maps)

In 1996 Macy’s ended up moving over to a new spot down the street, and their old building is now Queens Place, while an HSBC Bank was built on Sendek's land—Forgotten-NY visited the area a few years ago.

#flashback
#history
#macy's
#mary sendek
#queens boulevard
Do you know the scoop? Comment below or Send us a Tip