The New York Red Bulls are running out of narratives to bust. Sunday night, the club knocked their oldest rivals, D.C. United, out of the playoffs for the second straight year. A 1-0 win at home (thanks to a very late Bradley Wright-Phillips goal) was more than enough to win the series, continuing their unlikely rebuilding season.

The clash of styles between the two sides was severe. The Red Bulls stuck with the high pressure, dynamic attack that had lead them to the Supporters Shield. Ben Olsen's D.C. United, bolstered by the return of defender Bobby Boswell, stuck to "Bennyball": rigid defending, physical play, and praying that a long ball or a set piece could force a goal. The Red Bulls only needed a draw or better given their 1-0 win in the first leg, but a single United goal would force extra time.

So it went for nearly 90 minutes, with both sets of attackers unable to break down the opposing back line. United, who had not gotten a shot on goal in the first leg, would only manage two on the evening, both in the second half. And Bradley Wright-Phillips, moments after being denied by goalkeeper Bill Hamid, would score the match winner in second half:

In the locker room after the game, the Red Bulls were quite cognizant that the game was not easy on the eyes. "We like to play football. D.C., no disrespect to them cause they are good at it, but they like to ruffle feathers, but I prefer to play football," quipped Bradley Wright-Phillips.

With a hint of Ricky Bobby, captain Dax McCarty reflected, "No disrespect to D.C., I don't mean anything wrong by this. Just the way they play, they make the game ugly."

There will certainly be more "beautiful game" in the Eastern Conference Finals, as the Red Bulls will face the #2 seed Columbus Crew in a two-legged series. The 2008 MLS Cup rematch of sorts has the Red Bulls traveling to MAPFRE Stadium on November 22nd (5PM ET, ESPN), and hosting the second leg at Red Bull Arena on November 29th. The Red Bulls match up well against the Crew, with two 2-1 wins and one 2-1 loss during the regular season.

Should the Red Bulls win that series, they would host MLS Cup on December 6th against either FC Dallas or the Portland Timbers, who both emerged from Western Conference semi-final series of their own yesterday. 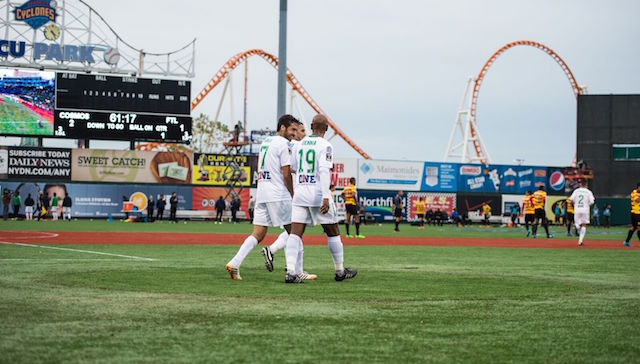 With their two big Spanish legends set to retire at the end of the season, it was a Hollywood worthy script on Saturday afternoon in Coney Island. Both Raul and Marcos Senna had a role to play in the Cosmos 2-1 win over the Fort Lauderdale Strikers, giving them home field advantage for next weekend's NASL Soccer Bowl final.

Fort Lauderdale took an early lead at MCU Park off a sixteenth minute goal by PC (yes, he really goes by "PC"), but the Cosmos would equalize in the 37th minute. A Marcos Senna free kick couldn't be controlled by the Strikers' goalkeeper, and Gaston Cellerino scored an easy tap in to level the score.

From there, the stage was set for that little bit of Raul magic. Danny Szetela found the Spanish legend in the second half unmarked, who easily turned toward the box and fired a left footed shot off the post and in.

Coach Giovanni Savarese was upbeat after the match. "We have done enough during the year to deserve to be in the final. I think it was a good game today. We knew that Fort Lauderdale was going to be a tough team to play against. They had a lot of energy and have some quality players."

The Cosmos will chase their seventh Soccer Bowl as they host the Ottawa Fury in the NASL Championship match next Sunday at Hofstra Stadium. A 5PM kickoff has been announced. The Cosmos defeated Ottawa 1-0 at MCU Park back in April, but suffered a 4-1 loss to them at Hofstra in late September, so expect another tough match to close out the careers of Raul and Senna.

Just a week after they historically fired Jason Kreis, NYCFC announced this morning they have hired Patrick Vieira as their new head coach.

Sporting Director Claudio Reyna, who was mysteriously absent from the firing press release, re-appeared to sing Vieira's praises. "Patrick was a legendary player and has all the characteristics required to make a fantastic Head Coach. His exemplary drive, passion and dedication have always marked him out as a rare talent and all of those qualities, alongside his understanding of the game, make him a natural choice."

Vieira is a reasonable choice because he's been part of City Football Group's management for nearly five years, and has been coach of the Manchester City Elite Development Squad since 2013. Whether or not he can overcome the esoteric MLS roster rules, or thrive while coaching his first senior team will remain to be seen.