The New York Cosmos are once again NASL champions! For the second time in three years since the club was "rebooted," the Cosmos raised the Soccer Bowl Sunday night after a 3-2 victory over the Ottawa Fury at Hofstra's Shuart Stadium.

While the stories and narratives are almost entirely about Raul and Marcos Senna, two Spanish legends who both retired following the match (as previously announced), it was Gaston Cellerino who stole the show. The Argentine striker completed a hat trick, scoring in the 8th, 72nd, and 85th minutes to secure the victory for the Cosmos. Ottawa kept it interesting with two Tom Heinemann goals, but were forced to play a man down after this bit of stupidity from Mason Trafford:

The trophy allowed Raul to wrap a tidy bow on his storied career, where he was a mainstay at Real Madrid from 1994 to 2010: "I'm very happy. It was my last game in my career. I'm very proud for everything I did and thank you to the club, my teammates and the fans for this amazing year. For me now, I start a new life with another project. I'm happy, but I'm also very sad."

Replacing Raul and Marcos Senna (who's been with the team since the team returned to the field in 2013) will be difficult, as both brought experience and skill to the team. "You can’t really replace Marcos and Raúl and obviously the locker room will be different next year," reflected team captain Carlos Mendes. 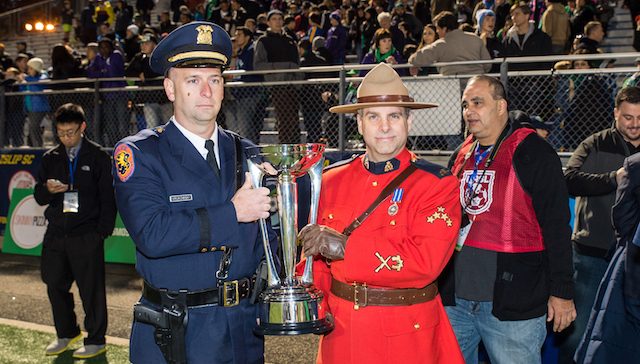 Depending on how you're counting, that's either the Cosmos' second trophy (if you just count the modern era), or their seventh (if you include the "classic era"). Either way, it's another success for the Cosmos. Perhaps now NY State will now finally get back to them about that stadium proposal?

#gaston cellerino
#nasl
#ny cosmos
#soccer
#soccer bowl
Do you know the scoop? Comment below or Send us a Tip