In Defense Of Fanny Packs

Earlier this year I purchased my first adult fanny pack—the Yens® Fantasybag 3-Zipper Fanny Pack in teal. The purchase was specifically for the Color Run, but for just $8.55 I received more than a convenient way to carry my stuff during a 5K, I got an Open Mind. As you can see, this is no fashion fanny pack, it is strictly functional, and exactly the kind of fanny pack that's still got a stigma attached to it. 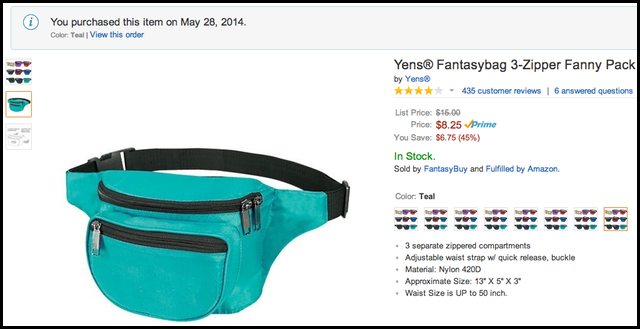 I'll get to the positives of packin' later, but first a little look back. The fanny pack as we know it was born, in name, in the 1980s, immediately becoming a part of the pop culture tableau of the time. According to lore, "Adweek Magazine predicted it to be the hottest product of 1988," though it's difficult to track down praise or too much else about its humble beginnings. Unlike every other little thing out there, the fanny pack doesn't seem to have an inventor who is cashing in on the idea or name. It belongs to all of us. It's the People's Pouch.

Just as with its entrance into the world, its exit-from-cool is hard to pinpoint, but by the mid-1990s they were on their way out. Along with scrunchies, the fanny pack became a noticeable mark of the uncool. It became dated, unfashionable, and was not even being worn ironically. Soon, the only people wearing fanny packs were tourists and your great aunt Gladys. Great for tag sales. Perfect to keep those pesky pickpockets out of your belongings.

In 2006, Weird Al included them in his song "White & Nerdy," and it was hard to ever remember a time they were "in." It seemed they were born onto this pedestal of humiliation, alongside pocket protectors.

Around that time the fanny pack fell into obscurity—there was no more parody, no more pointing and laughing... but still, the stigma never went away. To get around that, some people were rebranding them as "belted satchels," and that got them back on to the runway. Of course, lots of crazy shit goes down on the runway that never translates to real life, so that meant nothing. Here we are in 2014 and they're still not universally worn, even though these days it's not uncommon to see the word "fanny pack" on the gilded web pages of Vogue.com. 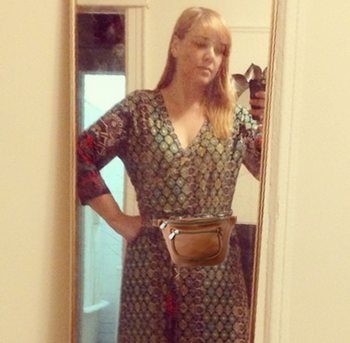 Here's the thing: every New Yorker should have a fanny pack, we need to reclaim and destigmatize them once and for all—so I thought I'd point out some of the fanny pack's finer qualities.

When I asked my coworkers if they would wear one, most said yes but specified "to a concert," "hiking," "at an amusement park." That's fine, they'll come around. Others were more accepting, and Lauren Evans quickly convinced herself she needs one, immediately—"the more I think about it the more I think I might shop online for one now."

The men in the office seemed less inclined to fanny pack, but they aren't lugging purses around everywhere. John Del Signore says, "I can't even tolerate the word 'fanny,' let alone a whole unflattering 'pack' calling attention to it. This is why I don't have kids." And Jake Dobkin, stuck in an early-aughts mentality, says he'd only wear one “ironically," adding, “Really as a minimalist I’m against all carry-alls, but the fanny pack is particularly bad—it has no carrying capacity and looks like it’d make your crotch drown in sweat.”

They'll come around, and so should you.

#fanny pack
#fanny packs
#fashion
#in defense of
#style
#original
Do you know the scoop? Comment below or Send us a Tip