The front page headline of the NY Times on December 17th, 1960 was accompanied by shocking photos of fuselage from a United Airlines plane and a TWA plane—it read: "127 DIE AS 2 AIRLINERS COLLIDE OVER CITY; JET SETS BROOKLYN FIRE, KILLING 5 OTHERS; SECOND PLANE CRASHES IN STATEN ISLAND." 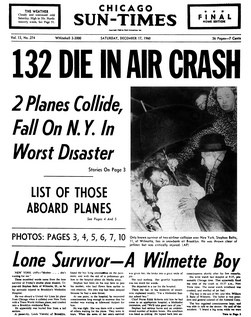 Today marks the 54th anniversary of the tragic crash, which brought planes down in both Park Slope and the New Dorp neighborhood of Staten Island.

Everyone on board the flights died immediately (as well as 6 people on the ground), except for an 11-year-old named Stephen Baltz, who was discovered in a snow bank about 15 blocks from where the plane parts had landed at 7th Avenue and Sterling. He was traveling alone and was to meet up with his family for Christmas in Yonkers, but the day after the crash he died at New York Methodist Hospital of the injuries he had sustained. Today there's a plaque there for Baltz, which includes the 65 cents he had in his pocket that day... and some believe his ghost still resides in the area.

Prior to his death, Baltz said that he remembered looking at the snow out the window before the crash: "It looked like a picture out of a fairy book. It was a beautiful sight."

In the NY Times article, they described the horror of the aftermath: "The scene in Brooklyn, where one plane fell in a densely populated district, reminded one witness of the bombed and burning villages of the Korean War. In Staten Island, where the wreckage narrowly missed a community of wooden homes and a public school, witnesses said the blood-drenched snow and the bodies made them think of a battlefield." Here's some news footage about the crash:

In 2010, a memorial was unveiled at Green-Wood cemetery on the 50th anniversary of the crash. There are no plaques at the crash site in Brooklyn, but one local says, "if you had X-ray vision, [you could] see the shattered pieces of the jet itself, hiding behind a backyard bush just feet from where they fell a half-century ago... the unofficial memorials tell their own story." Another has pieces of the plane in his backyard.

More photos of the neighborhood after the crash can be found at the Brooklyn Public Library archives, and earlier this year, a simulation was created to show what happened:

Some more images from Getty, including an aerial view: