In 1908 NYC Women Were Prohibited From Smoking In Public On January 21st, 1908 (that's 106 years ago today), the Sullivan Ordinance was passed in New York City, which made it illegal for women to smoke in public... because "Bowery moralist and political chieftan" Little Tim Sullivan thought it was gross, or something. At the time, he stated "he can get away with his ordinance even if it does infringe slightly upon woman's inherent and constitutional rights." Naturally, not a lot of women took this edict seriously, and two weeks later Mayor George McClellan vetoed it. Here's a little look back at its short run... 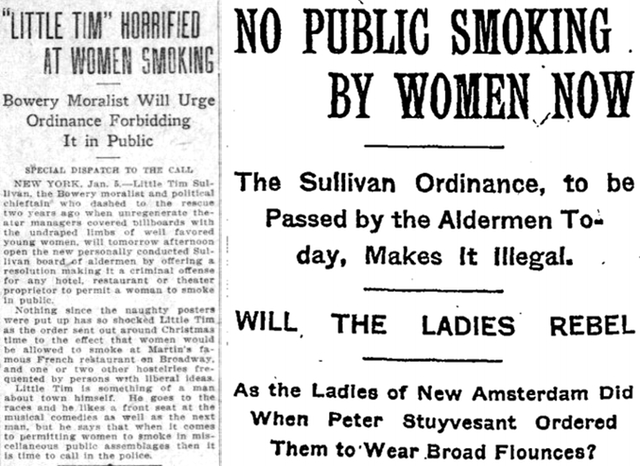 On the day of its passing, the NY Times wondered in their headline: "Will Ladies Rebel?", and reported:

"After today it will be against the law for a hotel or restaurant proprietor, or any one else managing or owning a public place to allow women to smoke in public. After a brief hearing yesterday the Committee on Laws of the Board of Aldermen unanimously approved the Sullivan anti-smoke ordinance which will be reported today and will pass the Board of Aldermen without the slightest doubt."

So this put the business owners at fault should a woman be spotted smoking in their establishment, but what about the lady at the end of the cigarette? Reportedly one woman, Katie Mulcahey, was the only person to ever be cited for breaking the ordinance—and though it did not specify fines, or any actions against the woman smoking, she was fined $5 and then arrested for refusing to pay. 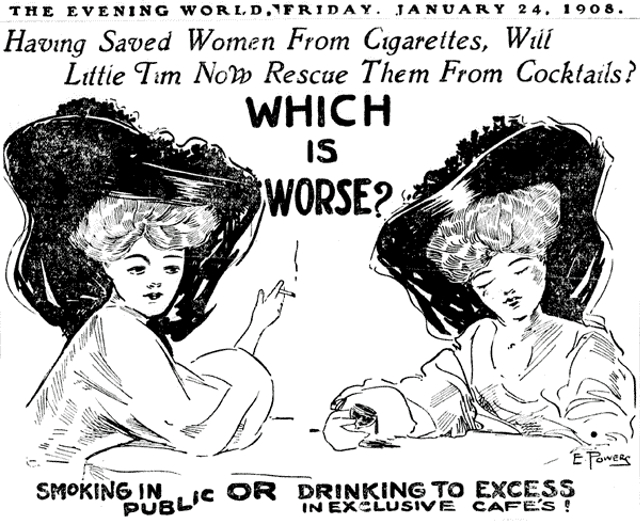 Today, the MCNY (who claim this ordinance was not rescinded until 1927), has shared a few photos of women smoking in public, all from the Art Students League Ball in 1953 (which you can see more photos of here). Click through and celebrate the fact that no one can smoke while you're eating dinner out anymore... and also that we all still have the right to drink in excess at bars.

#smoking
#sullivan ordinance
#women
#original
Do you know the scoop? Comment below or Send us a Tip