If We Tell You Our Ghost Stories Will You Tell Us Yours?

Ghost stories are best told around a campfire in the middle of the woods, preferably after you've just watched a scary movie, but for now we'll have to make do with this Internet space. Below you'll find a few real life ghost stories to get the ball rolling, but do you have one you'd like to share? We'd love to hear them—email us at tips@gothamist.com with your ghostly encounters and we'll share them here throughout the rest of the month. 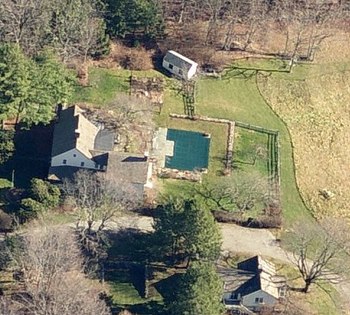 "I lived in a small, rural town when I was younger, and a lot of the houses were old and haunted (don't even get me started on THE ORBS!). The oldest and most haunted one I was ever in, however, was my best friend's (we'll call her P)—it was so old that there were some things that just never worked, like the doorbell (foreshadowing!). My friend's mom would always tell the story about how one day, when P and her brother were just toddlers, they were all in the kitchen having lunch, the sun shining in on the table, when the doorbell rang (dun dun dun!). P ran to the door and opened it, yelling back to her mom: 'Grandpa's here!' Her grandfathers were both dead, however, and she had never met either of them, yet described her mom's father with some detail. P's mom went to the door to find no one there, but an overwhelming sense that her father was near her. The doorbell never rang again.

There weren't always friendly ghosts in that house though, most of the time we would hear scary, clearly evil noises at night, especially in the attic. When we were old enough we were told that a long time ago a man had murdered his family there and threw them in the well that was still in their back yard, and that the man now haunted this house. We never went near that well." — Jen Carlson

"My grandmother was pregnant with my mom and she woke up in the middle of the night and went downstairs to her living room (huge old Victorian house from 1890) to hang until she felt sleepy again. As she was sitting there she heard a very distinct SIGH directly in her ear, and right next to her on the couch an imprint formed as if someone had sat down. Some guy hung himself in the early 1900s on the house's big porch, and my grandmother always said it was the ghost that sat next to her. Scary!" — Brendan Kenny, friend of Gothamist... who you may remember as 1/2 of the 90210 twins!

"In camp, the counselors used to tell us that these spooky buildings across the lake were an abandoned mental asylum where some campers had been kidnapped and killed years before. It terrified me for years! Then when Google Maps came out, I found out that those buildings were really Choate, a fancy private school. I've hated rich kids ever since. The End." — Jake Dobkin