Iconic NYPL Lions Patience & Fortitude Will Get A $250,000 Laser Bath

The stately lions, Patience and Fortitude, that have guarded the New York Public Library's Stephen A. Schwarzman Building on Fifth Avenue since 1911 will be going into hibernation on September 2nd. The library announced today that the most iconic duo will be "cleaned, repaired, and conserved over nine weeks," and during that time they will be covered up. The $250,000 project will be paid for by "a grant from The New York Life Foundation and donations from hundreds of New Yorkers."

How does a bath cost this much, you may ask? Well, it's a laser bath, a cleaning process that will aid in the repair of cracks and chips. And given their location (this dirty city) and given that pigeons love to roost atop their manes, they need to undergo cleaning every 7-10 years (they were last cleaning in 2011). 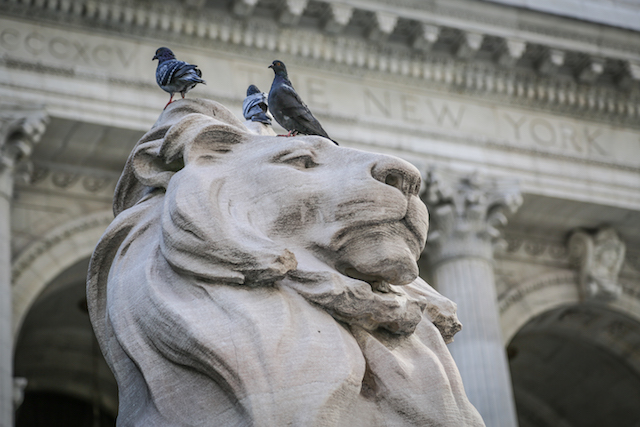 While the lions have become some of the most beloved fixtures in the city's landscape, they were not so adored when they first arrive over 100 years ago. According to the NY Times, New Yorkers called them "squash-faced, mealy-mouthed and complacent," and one man wrote a letter declaring: "We do not want square-jawed lions."

At the time they were called Leo Astor and Leo Lenox, according to the NYPL, after library founders John Jacob Astor and James Lenox. Later they were known as Lady Astor and Lord Lenox, and in the 1930s they finally got names that stuck: Patience and Fortitude. They were named such during the Depression by Mayor Fiorello LaGuardia "for the qualities he felt New Yorkers would need to survive the economic depression." Patience is on the south side, and Fortitude is to the north.