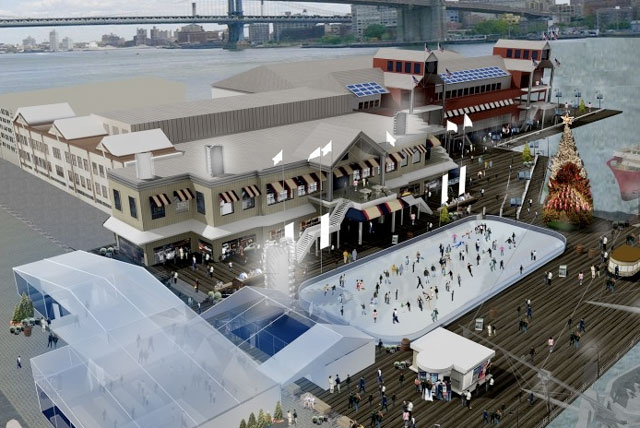 Clearly jealous of all the media attention bestowed upon the forthcoming ice rink at the Natural History Museum, the South Street Seaport has announced today that they're going to have an awesome ice rink too, you know. The Seaport Ice rink will be opening on November 28th (running through February 28th). 8,000 square-feet of ice will be open from 10 a.m. to 10 p.m., seven days a week, with admission rates at $5 and rentals at $7. So for $12 you can skate in circles while overlooking the East River, which used to have free ice skating once upon a time.

Meanwhile, the AMNH has released more information on their own rink, saying it will open to the public on November 22nd (also open through 2/28). Picture this: "Skaters will glide around a 17-foot-tall polar bear made of openwork stainless steel festooned with pine boughs and twinkling lights. Engaging facts about polar bears and the Earth’s polar regions, as well as 'green' tips and suggestions, will surround the rink." The Polar Rink is 150 by 80 feet, fitting up to 200 skaters, and admission will range from $6-10.

#amnh
#ice skating
#Polar Ice
#rink
#Seaport Ice
#south street seaport
Do you know the scoop? Comment below or Send us a Tip