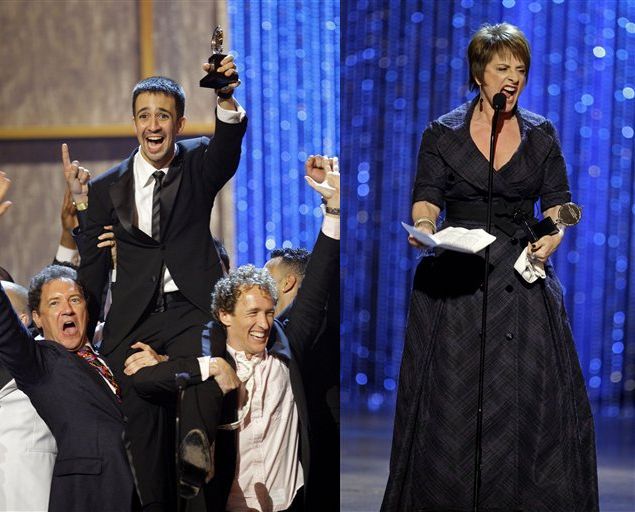 Lin-Manuel Miranda celebrates his win for In the Heights; Patti LuPone accepts her Tony award for best leading actress in a musical. (AP Photo/Jeff Christensen)

The 62nd Annual Tony Awards were presented last night at Radio City Musical Hall; the biggest winners were a musical first staged in 1949 and a Pulitzer Prize winning pot boiler from Chicago. The acclaimed Lincoln Center revival of Rodgers & Hammerstein’s South Pacific won the most awards, besting Sunday in the Park with George and Gypsy for best revival of a musical and nabbing six other Tonys. And the overrated Hollywood-bound melodrama August: Osage County won five awards, including best play, surprising no one.

The best new musical award went to In the Heights, which celebrates Latino life in Washington Heights; the show also won best original score, best choreography, and best orchestrations. In the Heights’s major Tony rival, the outstanding rock musical Passing Strange, was tossed a single Tony, for best book, in a pre-taped segment before the live broadcast on CBS. So if you’ve been inexplicably waiting to catch Passing Strange, which has been performing at about 50% capacity, the window’s probably closing.

Patti LuPone won her second Tony for best leading actress in a musical (Gypsy; she won her first in 1980 for Evita), and Patrick Stewart’s hopes for a best actor Tony were stymied by Mark Rylance, who won for his performance in the ‘60s sex farce Boeing Boeing. That comedy also upset the critically acclaimed but sparsely attended production of Harold Pinter’s The Homecoming for best revival of a play. Oh well, it's show business; Pinter’s play closed in April, most Tony voters didn't bother seeing it, and the recently-opened Boeing Boeing can use the Tony boost. The Playgoer has a funny and insightful “blogcast” of the show, which was emceed by Whoopi Goldberg. See the full list of winners after the jump.

Best Performance by a Leading Actor in a Play
Mark Rylance, Boeing-Boeing

Best Performance by a Leading Actor in a Musical
Paulo Szot, South Pacific

Best Performance by a Leading Actress in a Musical
Patti LuPone, Gypsy

Best Performance by a Featured Actor in a Play
Jim Norton, The Seafarer

Best Performance by a Featured Actor in a Musical
Boyd Gaines, Gypsy

Best Performance by a Featured Actress in a Musical
Laura Benanti, Gypsy

Best Lighting Design of a Play
Kevin Adams, The 39 Steps

Best Sound Design of a Play
Mic Pool, The 39 Steps

Special Tony Award
Robert Russell Bennett (1894-1981), in recognition of his historic contribution to American musical theatre in the field of orchestrations, as represented on Broadway this season by South Pacific.