I Worked For Tiger Beat Magazine During Its 1980s Glory Days At the age of 21, I answered an ad to be the associate editor of Tiger Beat magazine and editor of its bimonthly spinoffs: Tiger Beat Star and Tiger Beat Rock. I got the job pretty easily after meeting with the owner, a former Israeli soldier, Michael Edrei, who had purchased it from the founder, the legendary Charles Laufer.

It was 1983 and the long decline of the teen mag industry had begun. Gone were the days of young, long-haired editors hanging out on the set of the The Monkees (or even The Partridge Family). Times were tight and access was tough, and not just in the teen entertainment market. After John Lennon was shot, suddenly celebrity access became scarce to everyone outside of the New York Times or Time magazine.

It was a far cry from Hollywood to suburban Cresskill, New Jersey, a town of 7,500 that didn't even have a strip mall. There was one office building (ours), a fine French restaurant, a 7-Eleven knockoff, and a small Chinese takeout joint. In those days, I had a curly poodle perm on top with short sides—a rockabilly mullet of sorts.

To get access to events and interview subjects, I had to drive into Manhattan. My expenses were covered, which was great since my pay the first year was $14,000. That's about $30,000 today. I couldn't afford to move to the city, so I lived at home in nearby Franklin Lakes.

A colleague who worked on our company's clone of People magazine asked me to be her roommate in a $2,000 a month Chelsea loft, but I could not swing half the rent. It was fortunate I didn't end up living in that apartment because it later burned down. Her name was Judith Regan—later a big name in publishing and the brains behind the O.J. "If I Did It" fiasco. 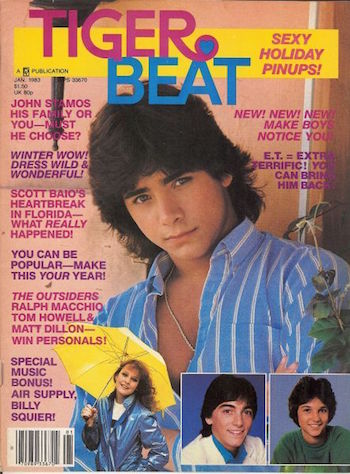 John Stamos probably hated being on this cover.

We were a skeletal staff of seven: two art directors, two editors, an assistant, a photographer, and a transcriber. Well, we actually had an older editorial director named Sharon Lee—who dated back to the Partridge Family days—come aboard for almost a year to train and direct us. She told us stories of David Cassidy hitting on her a lot and Henry Winkler asking her out in a hot tub. I was kind of jealous.

She made it clear from the beginning that John Stamos was not going to cooperate with us on stories. Apparently, when she was working at the old West Coast office, Stamos had posted a note that said "PLEASE DO NOT OVEREXPOSE ME" on her bulletin board. (See example to the right, clearly illustrating the overexposure he wished to avoid.) I always thought that Stamos should have been happy for all the coverage we gave him—he was the star most often the focus of the cover before Duran Duran hit in a big way. Then he had to share covers with the band. Still, other than TV Guide, we were one of the few publications that paid attention to Stamos.

In those early years, our main competition was Teen Beat and Teen Machine, both titles of Sterling's Publishing. 16 Magazine was still around then, too—and I was jealous that those editors got to work in Midtown with a larger staff and much larger salaries. After leaving Tiger Beat, I briefly worked as a ghost editor at Teen Machine filling in for the editor, who was recovering from complications from an appendectomy. I spent my days there churning out stories on an IBM Selectric typewriter.

Cresskill is about 20 minutes north of Manhattan—not a desirable destination for even a Z-list celebrity. Still, we had the occasional "star" come by for a photoshoot and interview in our office basement. Once, Kool & The Gang did a shoot for our Right On! title. They were really friendly, and I felt badly that our kitchen was not equipped to boil hot water for J.T. Taylor's tea. The lead singer of Kool & The Gang had to settle for cold tea.

The Sugar Hill Records offices were nearby in Englewood, so members of the Sugar Hill Gang and their protégées were frequently found roaming our offices.

I brought around Levi and the Rockats—that was during the nouveau rockabilly boomlet—and had them pose with cutout paper hearts for a special Valentine's Day spread. I thought perhaps we could turn them into heartthrobs, but they never caught on.

TV actor Jon-Erik Hexum came to visit one Saturday and I remember him telling me that I looked like a brunette version of the Mae West doll that I had on the cabinet behind my desk. He had grown up in nearby Tenafly and knew the area. I believe he came to our offices on the very unglamorous bus from the Port Authority. When I drove him back into the city, where he was in town promoting his TV show, he went ballistic when we drove past the USS Intrepid. He was apparently fascinated by warships, and asked me to pull over and he ran up up to the entrance. It was closed and he was very disappointed. Less than a year later, he was playing with a gun loaded with blanks on set and fatally shot himself in the head. I was sad to hear of his passing.

But you probably want to know about the big stars I encountered. As I said, access was limited. From the way we covered our "hot list" non-stop in regular issues of Tiger Beat and its various spin-offs, you would have thought that Duran Duran and Ralph Macchio were living under our desks. That was hardly the case. A star would generally give us one interview in a year. A transcriber would transcribe each interview and the transcript would be circulated around so each editor could write a story for the next issue.

Editors and assistants would cross out the quotes we had used in each piece to make sure we didn't repeat anything. The features were short—about 300 words or less—so a single interview went a long way.

Our files went way back to the '60s. I dug around and found the four questionnaires that The Who had filled out in 1965 and pinned them on my bulletin board. I was tempted to take them as a souvenir when I was fired, but I was honest and put them back.

There were a few lesser-known stars who were dying to become teen idols. Some would call every week. Glenn Scarpelli from the sitcom One Day At A Time was constantly pestering me. Scarpelli's voice sounded like it was changing the entire time I was at Tiger Beat. He followed me with his weekly calls when I moved to Tutti Frutti in 1986, and I swear that his voice was still squeaking then.

As editor of the Tiger Beat Rock, which I wrote half of myself, access to stars was a bit easier. Metal guys were particularly easy to get to and I was thanked inside the first Poison album, along with about 100 other people. I have great memories of my two interviews with Nick Rhodes from Duran Duran. Rhodes, a genteel tea-drinker, was the first guy I had ever met who had multicolored hair.

I still think of him when I pass the Morgan Hotel, where I'd interviewed him, and the restaurant that used to be Judson Grill, where I once had lunch with the whole band in the early '90s. They had tried to convince me to give up red meat after I ordered an 18-ounce porterhouse. (I had no problem eating the entire thing).

Surprisingly, I didn't see a lot of drug use, although former Sex Pistol Steve Jones once nodded out on me during an interview in a Riverside Drive brownstone, and Dickey Betts snorted coke for an entire interview. Boy George was hot at the time, but none of the editors ever got an interview with him. We had to show up at one of his press conferences in NYC once or twice a year and try to work from the quotes obtained there.

The best part of that job was that it gave me the chance to attend a lot of fabulous events. This was back when record companies had money to throw around. They would throw huge launch parties on both coasts for new acts. It didn't matter whether the artist was a "baby band" or a world-class act, you'd go to a fancy restaurant and there would be filet mignon and lobster. You'd get great swag. At once Swatch-sponsored event, each guest got to design her own Swatch watch, which the company manufactured and sent to us by mail.

After two years, I was let go from my job at Tiger Beat. The vice president and president told me they wanted some "fresh blood" in the company. I never understood what that meant.

I stayed in entertainment journalism, however, going on to write a column called "Rock-O-Rama" in the Daily News, and editing a series of start-up teen mags.

I still do some teen mag work here and there. But these days, access to the stars is virtually impossible. Several years ago, I did an email interview with Taylor Swift, the biggest star I'd "scored" in a decade. I sent in a list of 15 questions, none of which were remotely personal. Swift's publicists rejected all but two of the questions. Publicists run everything.

I haven't looked at Tiger Beat in years, though I'll occasionally grab a copy of BOP or J14—there's not much left of the industry. I'm still a sucker for a blurb like "Spend The Day With.." whoever the hot artist is at the moment.

I thought that teen mags would never die because you can't easily print out a big glossy pinup. But the Internet has pushed them to the brink of extinction. Nowadays, the teenyboppers aren't lined up at the local newsstand asking when the new Tiger Beat is coming in. (The magazine comes out every other month, but the circulation has to be a shadow of what it once was.) Meanwhile, teen stars put their own news and photos out on social media.

Recently, I asked my 13-year-old niece if she and her friends liked any cute boys in TV or music. I got a resounding "no." Once in a while, a Justin Bieber or One Direction will come along, but there's not much of an appetite for a "squeaky-clean" 14-year-old with a funny haircut.

Maybe that's not a bad thing. But I miss those days. Except the perm.

Anne Raso is a NYC-based writer and editor. She has edited and written for numerous teen magazines and music magazines over the years and served as a rock columnist at the Daily News. She currently edits the lifestyle website LuxeLifeNYC and contributes to Discovery Girls and Classic Rock Revisited.

#nostalgia
#tiger beat
#original
Do you know the scoop? Comment below or Send us a Tip