The Rain Room is going away. July 28th is judgment day. And that peculiar phenomenon I like to call "scarcity hysteria" has accelerated as the clock counts down. Marking its last week, MoMA has seen the number of people trying to get into the Rain Room explode. This past weekend there was upwards of a 13 hour estimated wait, which surpassed the high of 12 hours reached by London. Suck it, London! Much love to the fancy baby though, we don't publish takedowns of babies anymore. Not since the accident, at least.

The Rain Room is also dope. It's the work of rAndom International, an art house studio based out of London that specializes mostly in large installations dealing with light and movement. The Rain Room is the latest of those things, a 100 square meter area of falling water that the visitor walks through, stopping the rain with the awesome power of his or her body as you pass beneath the 3D sensors. They have done a bunch of other cool things. It premiered in London last October to great fanfare and made its way across the pond in May.

After last weekend and a Gothamist Public Service Announcement, I was called upon to rise with Matt Lauer and see if I couldn't make it rain. It appears my beat at Gothamist has become a mix of Dumb New York Shit and Waiting In Line.

I arrived promptly at 7 a.m. I had a hard time processing the scene. This is the line? That's it? Couldn't take that long! The rain must've scared people off today. Piece of cake. It wasn't until later that I learned how it really worked. Oh how I learned.

Members line starts to load into second-tier RR line closer to rain, room over the audible wretching of non-members

Due to the increased popularity, the Room has been opening at 8 a.m. for its Member's Only Preview (previously, that preview began at 9 a.m.). From 8 to 10:30, only MoMA members (and their elitist guest passes) are permitted to pass from outside the fence to inside the fence, where the line continues. From the start of the inside-the-fence line, the wait is typically about 6 hours. At 10:30 they begin to "pulse" groups in from the non-member side, alternating between the two. I'm still unpacking the brilliance of "pulse" and what it means. I've been on a broad science-fiction kick lately. Literally none of what I just wrote will matter in a week, save that bit about pulsing.

girl working the door v aimable, effective crowd controller. keeps telling us that she will "pulse" us in as soon as she can

been pulsing to sounds of the 90s nightclub too

I mostly passed the time by developing, and continued in my early delirium, a sort of alternate fantasy universe where Matt Lauer owned and terrorized the Rain Room, using it as some kind of proving ground for selecting combatants in a Hunger Games-type battlefield.

Meanwhile Al Roker lived and worked inside performing his Today Show duties on repeat like The Truman Show, occasionally riddling viewers and being a scamp.

a special task i give to thee, matt lauer u say? but it cant be! just come inside and dance for rain, join me now or feel eternal pain

dont mind him hes just a joker, trust me i know cause im al roker! Do u think id lead astray? A rain room troll i was born to play! 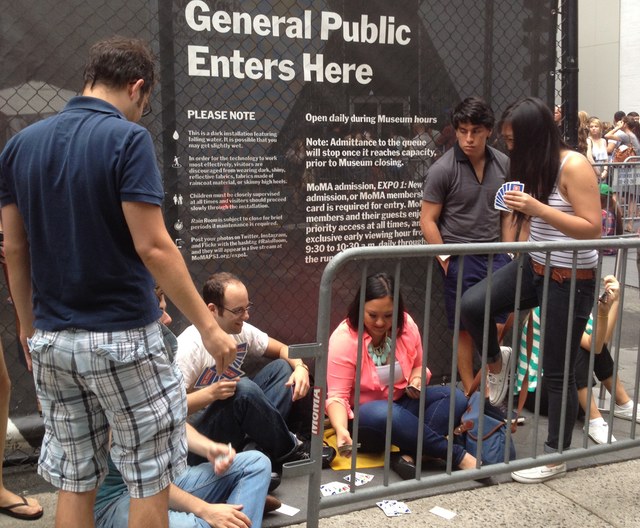 The edge of the inside-the-fence line. (Marc Yearsley / Gothamist)

The group at the front of the Member line arrived at 5 a.m., the non-member frontrunners said they came at 6. I arrived shortly after 7 a.m. and didn't enter the Rain Room until 3:30. That's like three cronut lines.

The back of the non-member line is where the crazy shit happens. The back half, the nosebleeds, the never-gonna-get-ins, basically just recycle throughout the day as one of the rotating staff members informs them of the wait time. They pout and leave, and are replaced by naive newcomers. But some stay even at the back of the line, which once it is past the two big loading doors is about a nine hour wait and impossible to get inside the Rain Room during regular business hours. Unless there's some sort of mass casualty incident in the line ahead of you...

Speaking from being in that fucking line for eight hours, I can mount a defense of the insanity, because it truly is hard to believe that you won't get in. It's hard to believe that it can, will, and does take that much time. I can't blame those who wait because it's hard for most of us to understand that you could actually wait so long. It still doesn't make sense. 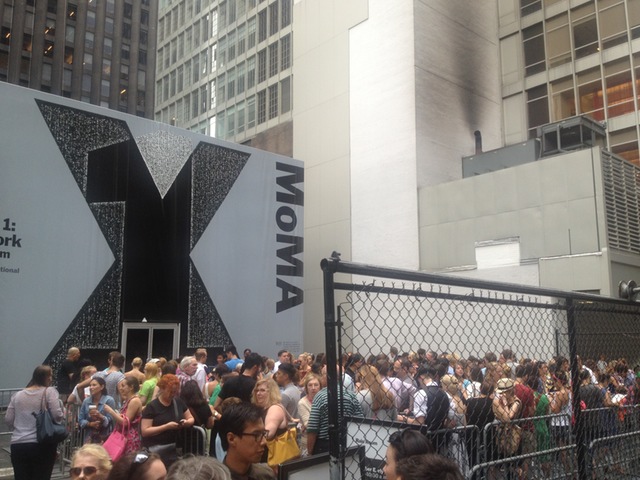 An issue arises for two camps. 1) the casual folks (tourists, passerby, whomever) who are just going to go and wait in line no matter what, no matter where they sit or how long it takes and 2) the stubborn ones who refuse to believe that it could actually take that long. The former are the ones that are most likely to tragically get turned away when the Rain Room closes up shop. I never want to witness that kind of defeat. It's the latter groups that usually crack; the ones who buy the tickets then try and sell them after four hours.

girls in front of me describe line procedure as "undemocratic", leave

I didn't witness any of the crazy stuff—scalping tickets, selling spots in line, paying surrogates to wait—nor any extreme bitching. It's just the way it goes. In fact, there was a couple behind me who wanted to take engagement photos inside the room. They were told how long it would take. There was no blood. They were alarmingly understanding and polite.

Even I, dispatched on the ground by Gothamist LLC to wait and wait and wait, had trouble believing that the handful of people between me and the inside-the-fence line could translate into 8 hours. Even the slaloming amusement park queue past the fence with 100 people in it couldn't translate in any reasonable way into that amount of time. Lines just generally don't work like this in terms of risk/reward. Something had gone terribly wrong. But it didn't. They were right. I still can't really process the wait time. Maybe it's PTSD or something.

like an inchworm we move along the leaves of time #rainroom

Sure, it sucks for non-members. It also sucks for members too. Even more so for members who didn't just join to lower their wait for the Rain Room. MoMA needs its members and has to prioritize them. One can halfheartedly wax about scams to sell more memberships but that's not exactly interesting, nor particularly accurate. They do want people to see the exhibit. As many people as possible. The "viewing only" line is an effective middle ground. Wait usually no more than an hour and you get to go inside the Rain Room, walk around the outside edge and see the Rain in action.

For those in line, you are free to come and go as you please, more or less. Even for solo parties, bathroom trips and food runs and all that junk are nicely accommodated. The MoMA staff is there to help you, not hurt you.

Are people friendly in line? Yes. Most came with friends, and they stick to themselves, but all the usual small-talk avenues are amplified by the close quarters, heat, and brushes with the absurd. The staff is also quite friendly, and down to chat. Heat, the line, food, sitting, other people, time, waiting, waiting, and waiting are all viable conversation topics. But for most, inside the fence became a safe place, in the Shadow of the Rain, in the comforting embrace of Order, conversation about the circumstances themselves dwindled.

They will keep letting people in, but at a certain point, they alert all stragglers that they are in line at their own risk. As in "You can come in and wait but we can't guarantee that you will get inside." Probably after 2 o'clock, depending on the line, your chances of getting in are very slim. Part of the time uncertainty (and all the "estimates") comes down to artistic intent: rAndom International would not allow a time limit for people to spend inside (only a politely suggested time), as the restriction itself would then become a part of the piece. They are correct. I respect that.

Is it worth 8 hours? I don't know! Tolerance for waiting, like time, is relative. I waited, say, an hour or so the first time I visited the Rain Room earlier this summer. Because of that, I can confidently say I would NOT wait all day (6-7) hours, or get up at 5 a.m. to get in line, to guarantee a spot. But that's because I've already been there! What about if I was visiting and had nothing else to do? Or a student and this was summer break? The Rain Room is worth seeing. What it is worth depends on a whole bunch of variables. But the line itself is nothing to complain about. Thousands of your decisions led you to that line.

Civilization has conditioned us to wait in line. This is evolution. Sometimes we find ourselves in secret lines—a restaurant for example, or waiting for the subway. This is a hidden line. You still wait. Only you just get to sit down during and not move as the line machinations machinate around you. Or the line is horizontal and non-heirarchical and when the train comes everyone can be at the front of the line simultaneously. It's still, in essence, a line. And that's perfectly acceptable. Certainly, some lines are different—qualitatively, quantitatively—than other lines. That is also perfectly acceptable. Frustration occurs during misrecognition. We're always waiting for something. Until we're not.

anybody need any rain? im the mayor of rain now reigning atop my throne in my rain room

#moma
#rain room
#original
Do you know the scoop? Comment below or Send us a Tip