The giant, spiderweb-like crack in the front window of the bus seemed like a real good sign right off the bat. A couple dozen people carrying Queen tote bags mulled outside, waiting and wondering if we'd even be allowed to get onboard the Bohemian Rhapsody Double-Decker “Rock Like Queen Sing-Along” Bus Tour last Friday morning. But as the man everyone was there to celebrate would have said, the show must go on, and onto the bus we ascended, windshield laws be damned.

The promotional bus ride had pulled into Greeley Square in Midtown to give fans the chance to "sing-along to their favorite Queen songs," in honor of the Digital/Blu-ray™/DVD/4K Ultra HD™ release of the Oscar-nominated biopic Bohemian Rhapsody, a.k.a. Wigs Hard: Kinda Sorta The Freddie Mercury Story. Considering that a) I get nauseous in moving vehicles, b) I've never been a big karaoke person, and c) I don't totally love Queen, I was clearly the perfect person to go on the ride. It was, truly, a no brainer.

A publicist told me there were about 50 spots available for each of the six rides the bus would be taking that day, and they had all sold-out the day tickets went up (it was a free event, but you still had to reserve a seat online). "I absolutely loved Bohemian Rhapsody, so I thought the opportunity to do karaoke on a tour bus sounded incredible, especially for free!" said Cara J, one of the people eagerly awaiting the event at 10 a.m. with me. Her favorite thing about the film? "It didn't leave me depressed," she said. "It was a tragic story, but you still felt empowered and appreciated his life more."

Everyone was given a Bohemian Rhapsody-emblazoned rain pancho in their totes, but since there were no Bohemian Rhapsody-emblazoned knit sweaters, there was no way I was sitting on the open air top deck on a frigid 30 degree day. Instead, I sat inside the downstairs area, which was decked out a little like a party limo, with light-up fake mics and tambourines aplenty. Someone was even giving out mustaches.

As the ride began, you could easily forget you were in NYC... if it weren't for the bus constantly lurching to a halt in traffic on Broadway. Honestly, I still can't fathom why exactly this needed to be a bus ride—there was no tour guide plucking out historical Queen spots around the city, and there seemed to be no particular significance to the route it took. Now that I think about it, I have no idea where we actually drove, because it was like a casino inside of that bus—except instead of blackout curtains, there were fake polaroids of the actors from the movie covering the windows. You literally couldn't see outside unless you strained to look through the cracked window in front... in which case all you saw were the backs of taxis.

They weren't messing around with the sing-along part though: it jumped straight into "Bohemian Rhapsody" to start as people sheepishly started to get into it (How do you start with their biggest song? That's like starting with the encore!). Right on cue, I became immediately nauseated by the combination of the bus starts and stops and the smell of gasoline and sandpaper, so I'm sure I was a sight to see. But the other 15-20 people sitting with me, who all seemed like very sincere and dedicated Queen fans who didn't have to go to work, started to really get into as we hit the "Galileo" part. 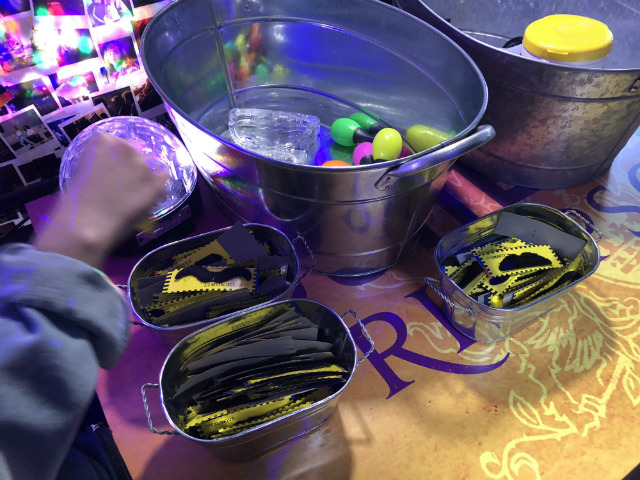 Because I'm a huge party pooper, I decided to ask people if they knew about the numerous credible sexual misconduct allegations against fired director Bryan Singer. Of the eight people I spoke to on the bus, seven of them had no idea who directed the movie (only one knew all about the accusations). More people knew that Sacha Baron Cohen was once slated to play Mercury (people kept bringing up that fun fact). Of course, not everyone pays attention to who is behind the camera of movies—but considering the fact that these were Queen superfans who still had no idea who directed it, all I could think was that the movie's marketing team had really done a great job shielding the film from its toxic behind-the-scenes production. I can't think of another recent Best Picture nominee where the credited director was so completely sidelined from the film's promotion as to be non-existent.

Anyway, "Crazy Little Thing Called Love" started playing, and that song is pretty cute. People were really feeling it now, based on the amount of tambourine white noise that was happening. There was a little more mumbling for the third song, "You're My Best Friend," which would be an advanced song for even experienced karaoke singers to nail.

Next up was "Another One Bites The Dust," at which point nausea and boredom got me thinking about how I've never really paid attention to the lyrics before—who the fuck is "Steve?" Here are some fun facts I learned about the song while sitting there: it was written by bassist John Deacon, it's inspired by the St. Valentine's Day Massacre (which also inspired David Bowie's song "Valentine's Day"), Michael Jackson loved the song, and it was used in an early cut of Rocky III until it was replaced by "Eye Of The Tiger."

The first real plug for the movie came next, with the "ay-oh" Wembley Stadium scene from the film played, followed by "Radio Ga Ga." It felt like the bus was starting to lose momentum—like, literally, were we even moving anymore? So too was the enthusiasm waning a bit, though one woman was able to rally everyone into clapping along with the chorus. This was followed by another really hard one to sing-along to, "Somebody To Love," and the program concluded with "We Will Rock You" and "We Are The Champions," which everyone was expectedly really into. I'm not gonna say it was the longest 30 minutes of my life, but it wasn't the shortest. 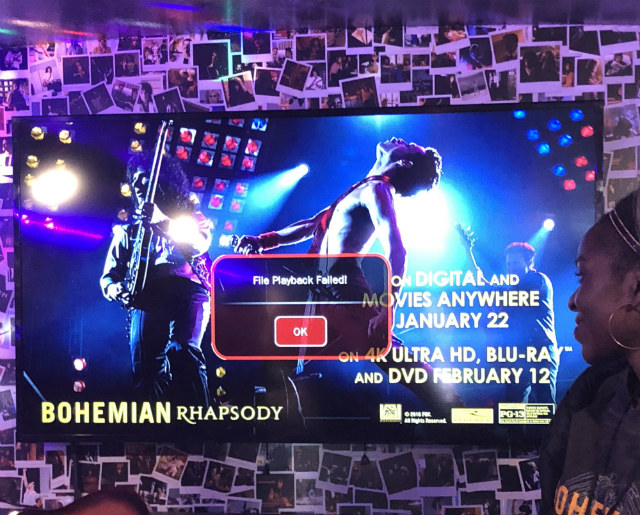 Except... it wasn't over. Despite being promised we would be able to escape after half an hour, we were still stuck in traffic somewhere in Manhattan, and someone had the bright idea to play "Bohemian Rhapsody" again. The lyrics were deeply resonating with me now: "Too late, my time has come/ Sends shivers down my spine/ Body's aching all the time."

It didn't stop there: "Crazy Little Thing Called Love" started playing again too. I saw the woman next to me texting her friend, "still on the bus. neverending." By the time "You're My Best Friend" started, no one was even pretending to be singing along anymore. Even the diehard fans looked crestfallen. Everyone started idly migrating to their phones, ignoring the appeals of the staff to get into it. I think Marx may have had it the wrong way around when he said history repeats itself "the first time as tragedy, the second time as farce."

Nearly 50 minutes after we set out, we finally got back to the starting point having narrowly missed going through the entire sing-along a second time. Despite the prolonged ending, everyone I spoke to afterwards had nothing but nice things to say about it, even though no one could quite figure out what the experience gained by being on a moving vehicle. Jessica Flores said she had a pretty great time disconnecting from the world: "Nowadays with the world the way it is, it's so nice to sing with other people," she said.

I finally spoke to Melissa Sonko, the woman who had rallied everyone in the bus to clap along with "Radio Ga Ga." Wearing one of the fake mustaches for most of the ride, she was the person who seemed to be having the most fun of anyone there. She told me that after dropping her kid off at school, she had traveled an hour and a half from northwest NJ to Manhattan—she even ran from the parking garage to make sure she didn't miss the ride. And while I was busy trying to figure out how I ended up on a promotional bus tour for a movie I didn't think was very good while fighting extreme nausea, she was having a much more profound experience.

"I survived cancer, DVT [deep vein thrombosis], pulmonary embolisms and double kidney failure in the last two years as a result of my cancer," she said. "And this was like a highlight of the last two years. I started crying during 'We Are The Champions,' it just kind of overwhelmed me. This is the closest I'll get to seeing them live, and that was pretty awesome. I didn't even get to see the movie in the theater, I downloaded it and watched it at home. I wanted to see it first so I could yell at them over all the inaccuracies, then go see it in the theaters so I wasn't doing it in the public... so after everything I've been through, I was like, 'this is fucking awesome.'"

And you know what? That really is fucking awesome. 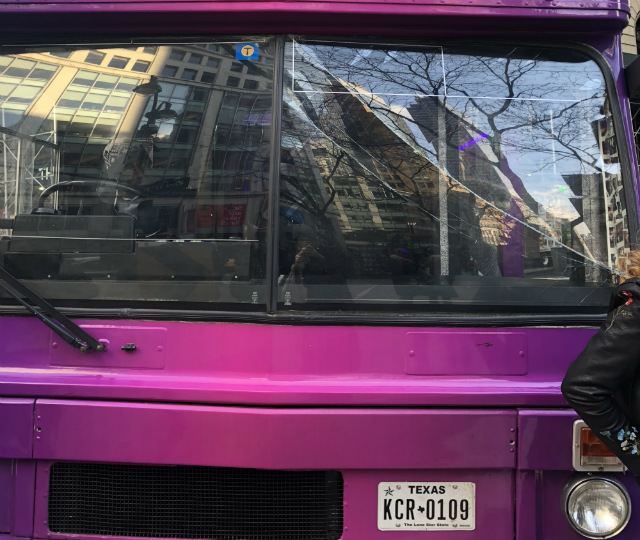 #bohemian rhapsody
#bus
#bus karaoke
#gothamist films
#I bet you're wondering how I got here...
#never again
#queen
#original
Do you know the scoop? Comment below or Send us a Tip