"I Saw The Outlet And Ran For It": Broadway Cell Phone Stage Crasher SPEAKS

The Juice Jackal who leapt through the fourth wall before a Broadway performance of Hand To God in order to plug in his iPhone 6 has emerged from his anthropogenic lair to give an interview to Playbill.com. The Juice Jackal, a.k.a. 19-year-old Nick Silvestri, has no remorse.

The Juice Jackal is from Long Island. 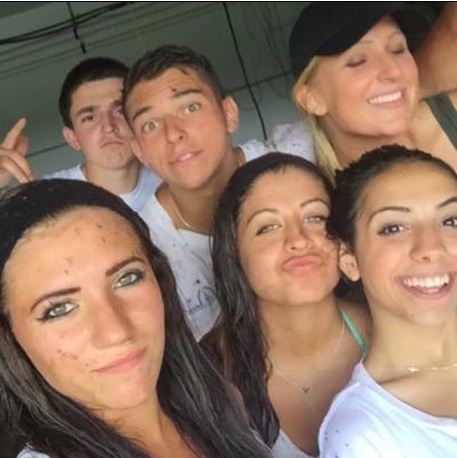 "Silvestri and friends" (via Playbill.com)

They ate beforehand at Iron Bar on Eighth Avenue and 45th Street, about a half block from the Booth Theatre where Hand to God is playing. They had a few drinks, and he admits "we were a little banged up."

When he noticed his phone was down to two bars of power, he tried to plug it into the USB port on the big-screen TV in the lounge at the back of the restaurant, but "I got yelled at by the manager."

By time the meal was over he had about 5 percent left on his battery, he said.

The Juice Jackal is not easily cornered.

"I saw the outlet and ran for it," he said. "That was the only outlet I saw, so I thought, 'Why not?' I was thinking that they were probably going to plug something in there on the set, and I figured it wouldn't be a big deal if my phone was up there too."

The reaction was immediate. Members of the audience shouted, and "about five security guards came running down. So I hopped off the stage. They were pretty mad. They said, 'What were you thinking?' I said, 'Hey, buddy, what's the problem?'"

Silvestri then asked the guards if he could jump back on the stage and retrieve his phone.
"They said, 'Are you crazy?,'" and one of them went up and got the phone.
Silvestri returned to his seat with his smart phone, but the drama wasn't over yet. "The head guy came down and started yelling at me in front of my family and the whole place. My mother kept saying, 'I'm sorry, I'm sorry,' and they finally let us us stay and watch the play."

In retrospect, what would he say to the cast? "Hey, I'm sorry if I delayed your show five minutes. But you got a lot of attention from this, so maybe I made your show a little better [better known]."

#broadway
#hand to god
#the juice jackal
Do you know the scoop? Comment below or Send us a Tip