The MTA is crumbling in real time, and is increasingly unpredictable no matter where you're going—so we're bringing back our Commuter Diary series. Next up: Paula Mejía.

Morning: I live off the C in Brooklyn, which is always an unpredictable adventure. If the train is on time, I can get to our office in about 20 minutes, which is incredible. But that doesn't happen too often, partially because I have a unique talent for getting to the subway just as the train is leaving, and partially because the gaps between the next C train can be 15 minutes plus, even in the mornings! The C is always semi-full during rush hour, if not packed to the brim, so some days I can't even get on the train because there's simply no room for another passenger. Today, though, the A is running through there (it shouldn't) and is going local (okay) for some reason.

C train service is resuming with delays after our crews repaired a switch problem at the 207 St yard.https://t.co/QBU6Dfk8W2

I gingerly get on and find... a seat? What is this magic? We chug along one stop, then get stalled before arriving to Hoyt-Schermerhorn. The announcer says it's due to train traffic ahead of us, which happens a lot during the morning rush hour. While we're stuck underground, I notice that four people sitting in the row in front of me are all reading books. That's nice. We're on our way, and the rest of the commute is uneventful.

Evening: The big MTA news today was that a goose was running amok on the Q train tracks, which had no bearing on my commute in any way but was an event I was very invested in. Before I leave work, I see that most lines are a mess, something I'm bracing for as I descend down onto the C/E stairwell.

happy evening commute everyone (the 'service changes' on the 1/2/3/4/5/6 are also delays) pic.twitter.com/ErmCqMZcmc

Down there, I find someone in front of me who's struggling to swipe their MetroCard to get through. They try a few times, then I go for it and... the same thing happens. It tells me swipe again, though I think after nearly five years here, I've learned the precise speed at which you're supposed to run your card for it to work. New York City, still full of surprises! We both step aside, and let other people go through. After the queue has dissipated I try again, only to find that my unlimited card has been "just used." Same goes for the stranger I'm now eternally bound with on this terrible journey. This is one of those stations that doesn't have a booth, nor does it have a place where you can top up your card, so we're stuck. Someone inside the platform sees the whole thing unfold and opens up the emergency exit, and we're about to go through when a man who's just come down yells "HEY! Are we just not going to pay to get on the train now??" I go up to this vigilante citizen and explain what happened. He seems satisfied with the response, and stops yelling. The C comes through shortly after, is not crowded, and rolls along with no delays. I get home in record time. Miraculous.

Morning: My unlimited card has expired today. I go to refill it and the screen spits out something I've never seen before: A message saying that this specific card isn't valid for a refill. I turn it over and it's not expired. What gives? Who knows! This is another one of those stations sans MTA employee booths, so I begrudgingly cough up $1 for the new card, trying hard to not think about the dollar slice I could have gotten instead. I hope this doesn't set the tone for the rest of the train ride.

When I get into the station, at about 8:20 a.m., the train is 6 minutes away. Alright, not terrible. It comes by, and it's not crowded, which is unusual. I take a photo to commemorate this rare sighting. 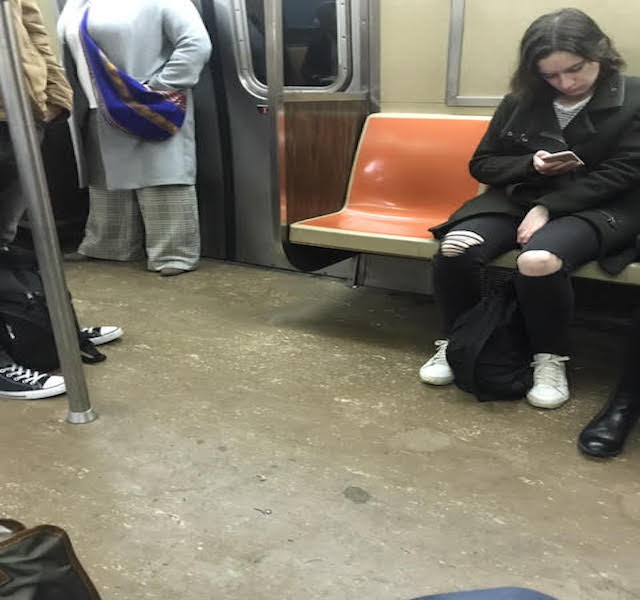 I wonder if the nicer weather means less people are taking the train. Or, because I'm documenting these rides for the week, the train is suddenly sprucing itself up. Maybe both.

Evening: I'm meeting a friend in dinner around Williamsburg, so I take a very different route from work. I'm a bit uneasy about what I'll find because today, the L train has been reeking of a mysterious scent so viscerally foul that's made passengers vomit and pass out, among other things. Naturally, service was suspended this afternoon.

Update: L train service is suspended between 8 Av and Myrtle Wyckoff Avs while we investigate the source of fuel smells on the tracks near Graham Av. Our safety checks have found that the air is currently safe, but we need to correct and resolve the condition. (1/3) pic.twitter.com/i0zRBFVe50

I take the 1 to the L at 6th Avenue, and it's... fine? Crowded but nothing unusual, it seems to be running okay. I'm on guard the entire time. After dinner, I take the G back home. Nothing to see here.

Morning: This morning, I'm reporting on the new Frida Kahlo exhibit that just opened at the Brooklyn Museum. Since the museum is walking distance from my house, I take a brisk stroll down Washington Avenue there on this chilly, sunny morning, which is a total treat. I file my story, then get down to the C train around 2:30 that afternoon to find that the train has just left. Of course. The next one is only 7 minutes behind, which isn't too bad. When the train arrives, it's mostly filled with teens who just got out of school. The train slows down several times, right before Jay Street-Metrotech. After then, it's fine.

Evening: I'm meeting someone in Astoria after work, so I take the 1 to Times Square. It's a pretty jerky ride, and I slam back and forth as we inch along north. One thing I like when you're sometimes on a local train is when you catch eyes with someone who's on an express train rolling by on the next track. It can be lovely and poignant, a sort of express train eclipse (The New Yorker had a cover about this idea in 2004). That happens as the 2 zips through: I catch someone's gaze, and then they disappear.

Times Square is a hellish place to switch trains, and I never come through this way. I notice that they have platform controllers to ease rush hour congestion on the platforms. The W train is right there when I'm descending the stairs, but the line of people going up the stairs is so deep that I can't get through. I manage to get on right as the doors are closing and find a corner seat, which feels like a feat. As we're going towards Queens, something is off about this train, but I can't put my finger on it until we're at Lexington and 59th Street. This train has no ads in it. I don't miss the ads for Casper or Seamless or whatever else, but I find myself feeling strange anyway. 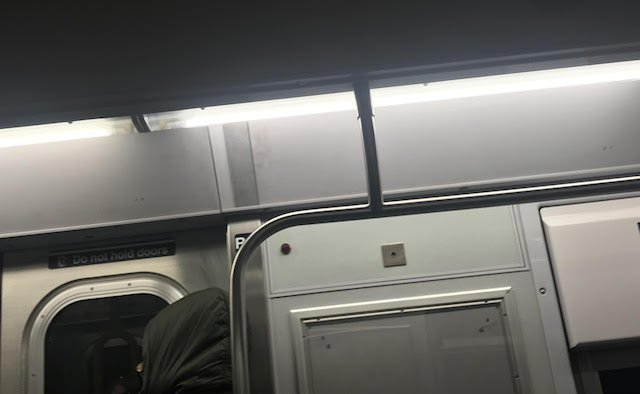 Morning: I just miss the C again, right as I go down onto the platform. Is there a word for this particular phenomenon? I'd really like to know, as I seem to be plagued by it. [Note: we gave this a German word: Verpassterzug.]

Evening: The L train is delayed once again. I have some time to kill before meeting a friend for a drink, and decide that SoHo evening foot traffic is slightly less bad than whatever else might be going down on the train below during rush hour. So I take a walk down Spring Street instead of immediately going onto the subway. I hadn't gone outside since this morning, and getting a bit of air, even cold air, feels refreshing. I grab some pizza at Prince Street, then get on the 6 train. There's a guy on the 6 mumbling loudly: "So this is the great New York City, what's so great about it?" Appropriately, no one looks at him. At 14th Street I walk to the L, bracing myself to be there forever. The platform is a bit packed, but everything is moving along as usual. The highlight is meeting this extremely good boy in a backpack. 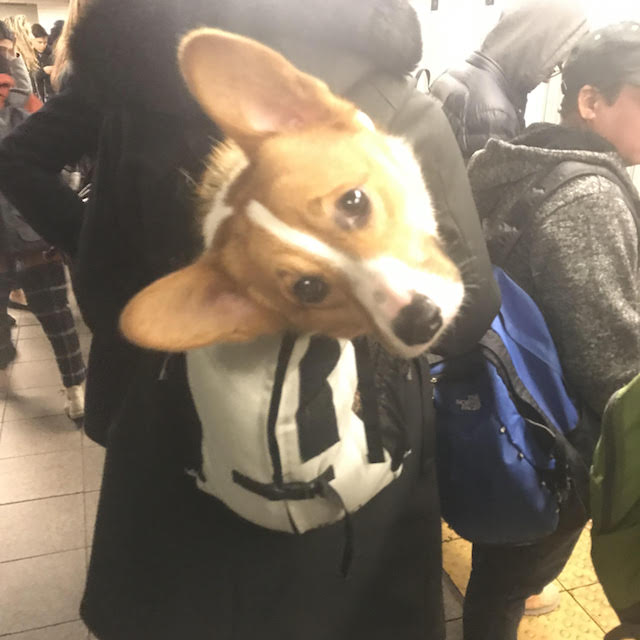 After drinks I take the G home, which runs without complaint.

Morning: The C is extra packed and jerky this morning. I'm wedged in tight for the majority of the ride, to the point where I can't even dig my headphones out of my bag. Yes, I totally should have done that before. My mind wanders to pasta (I'm a huge proponent of breakfast pasta, fight me). The train is stalled for what feels like ages (I can't dig out my phone to check how long) on and off between Hoyt-Schermerhorn and Chambers Street. I go up a little further than usual on the train today to check out a strange blob protruding from a vent in the 23rd Street C/E stairwell, which, all told, takes about an hour for not going very far. One star.

After checking out the blob, I try to head back downtown only to find out that all trains seem to be going haywire. Overhead, they tell me that there's a smoke condition at 2nd Avenue (from a fire near the station, turns out), so the E is stuck there until who knows when.

F and M train service is resuming in both directions after FDNY extinguished a fire near 2 Av.

Expect extensive delays in F and M trains as we work to resume normal service.

Funny enough, the week ends how it started: With an A express train rolling through a local station, which we're advised to take in the interim. I take it to the closest possible stop, West 4th Street, and walk a bit longer than usual to work.

Evening: There's nothing unusual on the C home. It does feel like a victory though, when I walk to catch the B69 bus to meet a friend and the bus is at the stop. I run and catch it just in time. Vindication! Let's hope this week there's more of that.

Do you want to document your commute for one week? Email us at tips@gothamist.com

#commute
#commuter diary
#Cuomo
#MTA
#subway
#we the commuters
#why god
#original
Do you know the scoop? Comment below or Send us a Tip