'I Cannot Let That Happen': How Tone Balzano Johansen Is Fighting To Save Sunny's

The story has been told countless times before, and though it feels like recently it's been told more and more often, that could also be because I've lived here for ten years now. Anyway, the story you all know is this: secret autonomous zone opens, autonomous zone persists to become widely beloved institution, institution's land becomes valuable, institution gets devoured by real estate, institution has jazz funeral, institution becomes romanticized by blogger who didn't go there often enough. Sunny's Bar, which almost lived that story once before (except replace "real estate" with "the angry ocean"), is living that story again as you read this. Except that one woman, Tone Balzano Johansen, is out to change the usual ending to "institution lives on as a home to weirdos and dreamers." She could use your help though.

Sunny's, which persisted and then became widely beloved, first as a speakeasy and then a legitimate bar under the leadership of the inimitable Sunny Balzano, remains the kind of easygoing neighborhood bar where you can find yourself whiling away the whole night in the front room or backyard, or taking in some music in the spacious back room (just don't talk while the musicians are jamming, it's rude). New York is always changing, but at least a few places like Sunny's that are welcoming to art freaks and tired locals alike have to stick around if the city is going to be any fun at all. 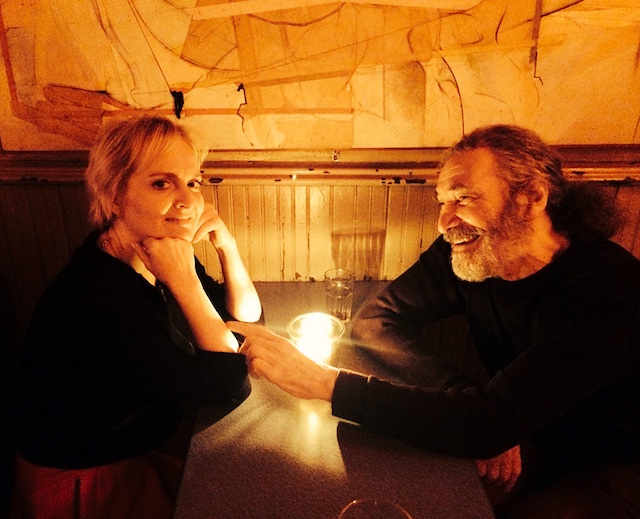 And now, after surviving the onslaught of Hurricane Sandy and reopening in 2013, Sunny's is once again facing a fight for its life. In this fight, Johansen, the bar's co-owner and widow of Sunny Balzano, is working overtime to raise money for a down payment that will allow her to hold on to the building that the legendary neighborhood bar occupies.

The struggle to save Sunny's dates back to Sandy, Johansen told us, when other members of Balzano's family who held a stake in the property told Balzano and Johansen they wanted to sell the property. And while Johansen only owned just about a 4% stake in the property, she's held firm in her commitment to not sell the bar, even after Sunny died last year. Johansen was able to win a court decision that gave her a chance to buy the building last year, and now has until July 27th to come up with $65,000 for a down payment for a mortgage from a bank.

"People sort of naturally now, go 'Oh that's closing and this is closing,' this is like the New York story right?" Johansen told Gothamist. To rewrite that ending, Johansen has thrown herself into saving the bar, doing the behind the scenes "invisible" work of making business plans and meeting with banks with a couple of partners.

Part of that work has been running a crowdfunding campaign and other events to raise the money for the down payment and buy the property. There have already been a couple of benefit concerts, and there's an art auction featuring works from the many artistic friends of Sunny's.

Or if art isn't your thing, there's going to be a "Norwegian-style craft raffle" on Mother's Day, which will be an excellent opportunity for you to take your mom to the weird dive bar where you spend your time. You can even win socks that are being knit by Johansen's mom herself. "I come from a little town in Norway and all the women there used to knit and crochet and do stuff to raffle to pay for rescue boats," Johansen explained. 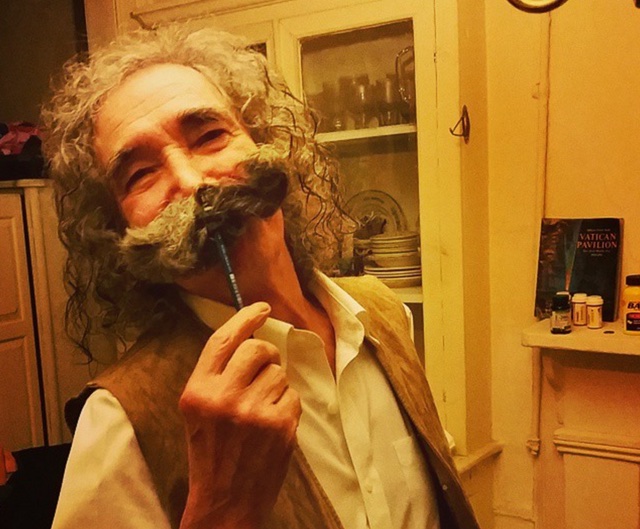 Balzano at home with mustache on his 80th birthday. (John Del Signore)

Or for those of you who just like to help by drinking, Sunny's is finally going to start opening on Mondays, and all of the proceeds from those nights on nights will go directly to the fund to save the bar. In addition to live jazz in the bar's back room, Mondays will also feature beer and shot specials and the occasional special cocktail made from donated booze. All of it is part of an effort that has taken over Johansen's life, and that she's put all of her faith in.

"A lot of people have asked 'What's your Plan B?'" Johansen said. "We all have limited energy, and when you put all the energy you have into something, there's nothing left for a Plan B. I can't even think about Plan B. I have to just put everything that I'm doing on Plan A. That's all I'm doing."

At a time when Red Hook is viewed as the next great place to plop down a tech complex with a silly old-timey name, it now seems almost impossible that a unique treasure like Sunny's, now located on a highly desirable piece of real estate with commanding waterfront views and steps from Fairway and IKEA, can keep going.

"This bar is a survivor," Johansen added, referring to an idiosyncratic haven that has already endured so much, including the loss of its adored proprietor. With any luck, Sunny's will stick around and remain the kind of place where one night you and some friends hang out all night, and after leaving near closing time, decide to hop a fence into a park that has views of the Statue of Liberty that are so clear you feel like you're standing next to it.

#crowdfunding
#red hook
#sunny's
#sunny's forever
#tone balzano
#original
Do you know the scoop? Comment below or Send us a Tip