Five architectural firms have banded together to brainstorm ideas for adding green space to the far west side from the Village to Tribeca, also known as Hudson Square. A plan to add more garbage trucks to the neighborhood, writes Downtown Express's Patrick Hedlund, led local stakeholders to elicit architectural visions. Five firms - Arquitectonica GEO , FLAnK, LTL Architects, SPaN and Zakrzewski + Hyde (in association with Starr Whitehouse Landscape Architects and Planners) - were asked to assume two still-up-in-the-air events: that the city will rezone the northern part of the neighborhood and that the Sanitation Department will not build a proposed facility.

The effort, or charrette, led architects to create a even more mixed-use community that takes advantage of its access to Hudson River Park, the waterfront and the changing Pier 40. Above, Zakrzewski + Hyde/Starr Whitehouse designed a sloped schematic linking St. John’s park to a smaller sanitation garage on the UPS parking lot and down to street level.

“It seemed like an opportunity to really think about how we could introduce a more productive and positive dialogue about rezoning and development in general in the Downtown neighborhoods,” said Moore, who’s been developing properties in Hudson Square for 15 years. “To date [the dialogue with the city has] been contentious and fairly unsatisfying, so I feel that in a very vibrant real estate market, there’s got to be a coming together of the private and public in a more intelligent way.”

Below is a rendering of the green space above a sanitation garage and the UPS Building. Here's how one website, NYC.com, describes Hudson Square: "Hudson Square, like NoLita, is as much the creation of Real Estate branding than the rise of an organic community... However, the area is unique enough to deserve its own moniker."And you can buy the city's 2002 rezoning study of Hudson Square for $10 (but there are highlights here). 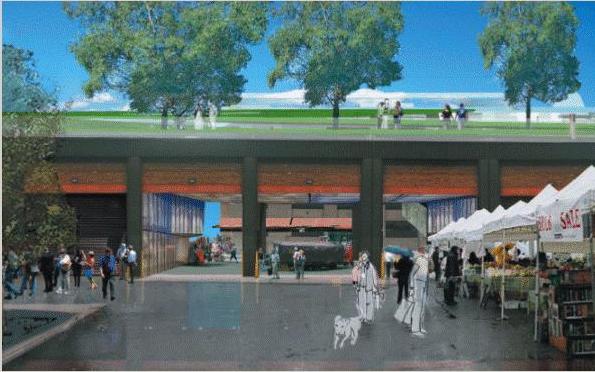 The Hudson Square charrette will go on display on October 27 at 627 Greenwich St., at Morton St.