How To Turn Hook-Ups Into LTRs And More: Dr. Ruth Gives Sex Advice To Millennials

Everyone knows Dr. Ruth from her career as a pioneering sex therapist. Few, however, know the triumphant story of Karola Siegel, the girl who became Dr. Ruth. From fleeing the Nazis, joining the Haganah in Jerusalem as a scout and sniper, to coming to America as a single mother, Becoming Dr. Ruth is filled with the humor and honesty of Karola Ruth Siegel, the girl who became Americaʼs sex therapist.

To help celebrate the off-Broadway show at Westside Theater, Gothamist took the opportunity to ask the storied expert a few hot-button questions, all submitted by our very own readers. See what Dr. Ruth had to say. 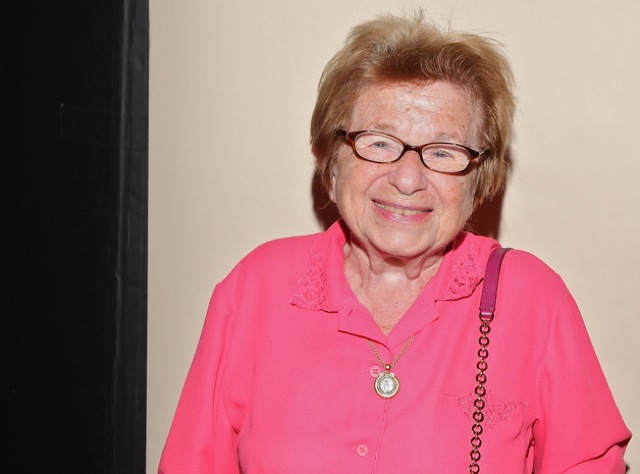 How do I turn my hook-up relationship into an LTR? We've been sleeping together casually for a few months, but I am falling for him. That is one of the biggest dangers of the so-called Hook Up culture; very often one of the two people falls for the other and now they're stuck. They continue to see this person to get their regular “fix” no longer just of sex but of emotional fulfillment and that makes it so much more difficult to end it. What you must do, and I'm not saying this will be easy, is talk to this person, tell them that you are falling for him or her, and ask if there are any reciprocal feelings.

If the answer is no, then you have to stop seeing this person. Otherwise it will drag on and on and you're going to get seriously hurt when this other person tells you one day, “We have to stop seeing each other because I'm in a relationship now. Thanks, it was fun.”

Is sex ever okay on the first or second date? Can a relationship come out of it? Did you know that if you try to jump through a wall a billion or so times the molecules will eventually line up and you'll get through? Of course you'll be pretty bruised up from all the other times that you merely crash into it.

Similarly there have been one night stands that have turned into long-lasting marriages but there are enough obstacles to this that if a long-lasting relationship is what you are really seeking, then my advice would be to wait and see whether this other person might have the potential to be a partner. I'm not saying that you must wait until marriage to have sex but if you have sex too quickly that it may interfere with the process of creating the relationship you really want.

If you can prove to yourself that you can have an orgasm while wearing a condom then it should be easier for you to convince yourself of that possibility when you're with a partner. Whatever you do, don't start thinking about failure, for whatever reason, because that will almost guarantee that you won't be able to have an orgasm.

I'm paranoid about STDs so I tend to wait until I *really* know someone before having sex. Am I over thinking things? I don't think you are. STDs are serious and if you are not in a relationship with someone, even if they show you a test they took last week, if they've had sex with someone else since their last test, they could be infected and pass it on to you.

But if you're in a relationship, and you are sure they are disease free, then your level of safety should be better. Might someone cheat on you and then infect you? It could happen but it's less likely than if you're having sex with someone who feels completely free to have sex with others.

My boyfriend thinks it'll be sexy for us to send nude pictures of each other with our phones, but I'm afraid of accidentally sending them to others. Why does he feel the need to sext? Am I being too cowardly? Accidents do happen but even more likely is that he'll send your picture to someone else on purpose to brag, or maybe post it to some website. Even if he doesn't do it while you are together, what happens if you break up, especially if you dump him? Those pictures could turn up anywhere. So if you want my opinion, don't do it.

If you think it's not psychological but he has some medical issue then urge him to go get checked out by a doctor. But it's probably psychological and just try not to express your worries because that will only put more pressure on him and make matters worse.