How To Stop And Smell The Flowers, Become Non-Imperialist, And More In The West Village

Here in New York, it comes as no surprise that there are a million ways to get from here to there. We're a bustling and constantly on-the-go city—and you bet we're proud of it! But while math teaches us that the fastest way to get from where you are to where you're going is a straight line, can't we all agree that's a little boring?

Some might argue that route-mapping apps are so ever-present and inescapable that they turn could-be adventures into a purely functional, time-saving routine. We dare you to answer: how many times do you look up directions on the reg? Does it not default to fastest route, assuming that's what you want? And does that not steal a bit of surprise and joy from the journey itself?

In partnership with Sanpellegrino® Sparkling Fruit Beverages and their Delightways app, we challenged ourselves to slow down a little bit, without a pre-charted path or ultimate destination—to discover the (semi) hidden beauties and local gems of one of our most beloved neighborhoods: the West Village. We stopped, we smelled the flowers, we found heaven in weird books, and we ate some cookies, of course. And to help avoid what could be your next "stare at the ground and get where you're going" walk, we curated a little insider's neighborhood guide, charting our trip and (hopefully!) inspiring a little joy. So the next time you're visiting, why not look up, look around, and seek out a few new experiences along the way to wherever you may be going.

Famous for its adorable streets, cute cafes, historic homes, and celebrity residents, the West Village is surely one of the most coveted neighborhoods in which to live in all of Manhattan. It's also one of the most dutifully explored, profiled, filmed, and ode-ed upon areas in the entire city, so there's not much here that's truly secret anymore. Heck, even the so-called speakeasies appear on any good Google-able list! That said, there are still plenty of true gems to be found on these impossibly pretty blocks, un-hyped spots hidden in plain sight, if you will. 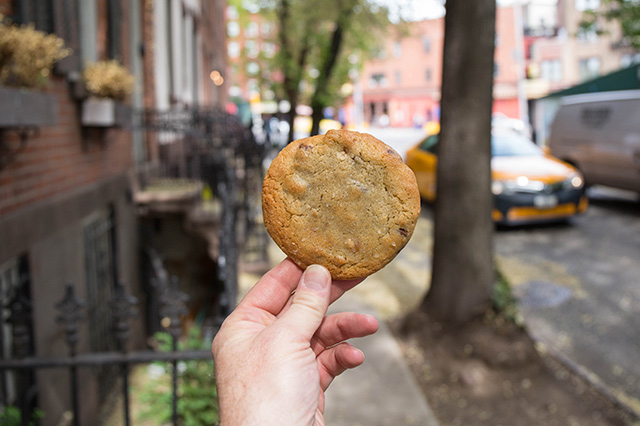 Milk and Cookies Bakery
It's been more than a decade now since this cute-as-a-button place opened on one of those ridiculously charming streets that makes the West Village so beloved, but a recent visit confirmed that Tina Casaceli and her crew are still baking up some first-rate goodies (the cookies are of the gooey-chewy-sweet sort) in an impressive variety of fun flavors. And there's ice cream and milkshakes (for cookie-dipping), too. AND if you're willing to wait a few minutes, you can design your cookie and they'll make it and bake it for you on the spot. Good for locals, excellent for bringing out-of-town visitors.

The Birdhouses of McCarthy Square
This tiny, surprisingly lush triangle of a park right on 7th Avenue South is notable for its monumental flagpole, which was originally erected in Flushing Meadows during the 1939-1940 World's Fair; for its memorial plaque honoring PFC Bernard Joseph McCarthy, the first resident of Greenwich Village to be killed in the Second World War (in Guadalcanal in 1942); and for the architectural birdhouses nestled among the greenery in the mini-park's central island. The mysterious artist who makes and installs these elaborate, hand-crafted birdhouses, made to resemble a log cabin, or an adobe desert home, or a ski lodge, switches them out every now and then, so you (and, presumably, West Village birds) never know what to expect when you visit.

Unoppressive Non-Imperialist Bargain Books / Carmine Street Comics
Despite playing a supporting role in a recent feature film (Jenny Slate's charming and funny Obvious Child), the refreshingly pointed, wonderfully cluttered Unoppressive Non-Imperialist Bargain Books on Carmine Street had been struggling, so owner Jim Drougas started to sublet half the store to a series of tenants, the most recent of which, Carmine Street Comics, has now settled for the past three years. It may look increasingly out of place on Carmine, holding its scruffy, lefty ground among the influx of high-end coffee shops and fancy healthy-casual restaurants, but that's all the more reason to root for it to be around for at least another 20+ years. 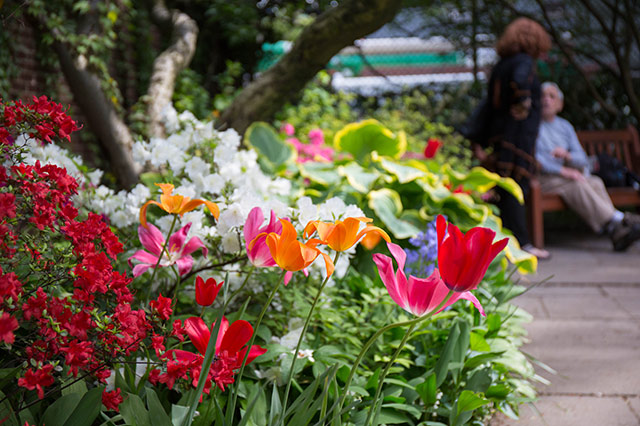 The Gardens at St. Luke's in the Field
The Church of St. Luke's In the Field takes up a big chunk of this Hudson Street block just south of Christopher, and though much of the walled compound is off limits to the casual West Village wanderer, there's about two-thirds of acre of garden in there that's open to the public. And it's lovely! There are paths and benches, lawns and a wide variety of blossoming flowers, both "garden standards" and rare hybrids. And even right after the elementary school gets out next door, it's always peaceful in here, with a seat or two free for you and a companion to just relax and smell the flowers.

The Garret
If you've ever been casually munching on a burger and fries (hopefully cajun) at the 5 Guys on Bleecker Street late at night and seen a crew walk in dressed much more fancy than you, then disappear somewhere in the back of the joint where you imagine the bathrooms to be... well they're heading up to The Garret, a "secret" cocktail den on the second floor. Accessible only by an unmarked stairwell within the 5 Guys, The Garret has about a dozen beers on tap, specialty cocktails, an artsy design scheme, and surprisingly fun views (considering you are only on the second floor) out across this busy stretch of 7th Avenue South. If you're out on a date and your companion doesn't know about this place yet, it's definitely a pretty smooth move.

Feeling like having a little adventure? We thought so! Go ahead—we hope you're ready to smell the flowers, not just figuratively, but literally. And alongside our friends at Sanpellegrino® Sparkling Fruit Beverages, we encourage you to discover The Life Deliziosa™—the joy of wandering and the art of serendipity. Want to add a breath of fresh air to your journeys to come? Discover Delightways today—it's a curated journey-finding app full of local haunts and hidden gems that encourages you to rediscover the art of wandering—right here, at home in New York. Delightways helps you live The Life Deliziosa™, reminding you that delight is not only in the destination, but in the moments of joy we find along the way.

If you've got a destination, take a chance on something new and discover the most delightful way there. Keep cool with a refreshing Sanpellegrino® Sparkling Fruit Beverage and find your joy in the journey today.

This post is a sponsored collaboration between Sanpellegrino® Sparkling Fruit Beverages and Gothamist staff.

#gothamist collaboration
#sanpellegrino
Do you know the scoop? Send us a Tip