Listen, all of our friends are just fine, but have you ever pined for new, more awesome friends who, like, own a boat? Or for money with which you could procure your own vessel? Well, life isn't like some big flashy Hollywood movie, and statistically neither of those things are going to happen for most of us, so we're going to need to tap into our powerful imaginations and just pretend we own a boat. The best way to do this is to head over to the Citi Bike of Sailboats: Manhattan By Sail, where you'll get a wooden schooner, a sun-kissed captain, and the wind in your hair.

You have probably seen their fleet on the city's rivers before, perhaps referring to them as "the pirate ships"—we were told the crew doesn't really like this, but that really is what they look like from afar. This is not your little cousin from New Jersey's party boat, this is a beautiful wooden sailboat. 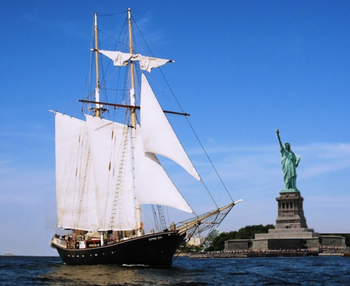 Some Gothamist staffers finally took a spin in one of them (the Clipper City) last night for the Lobster & Beer Lovers Sail, and we're honestly not just saying this because the $89 tickets were comped: it was freakin' spectacular. Some may even say: life affirming.

Their two ships have themed sails, like the Lobster & Beer one we went on (for the $89 you get an open beer bar for the two hour sail, and two full-size Luke's Lobster rolls, with some fixins of potato salad, cole slaw, and pickles). There's also a champagne brunch sail, a happy hour sail, a full moon sail, and so on. Also, once a month there's a gay and lesbian night and we're told that all of the crew members take their shirts off (seriously).

The least expensive option seems to be the Happy Hour Sail, which costs $25 and offers a cash bar with 1/2 price drinks (the other sails hover around the $50 price, but always offer something in the way of free drinks). And the most expensive sail costs $1600 (the Late Night Rendezvous Sail) where you and your guest get the sailboat to yourself for 90 minutes (this one includes a bottle of Veuve Cliquot). One concern we had was overcrowding—but since the weather last night was hot and it looked like a storm was coming, our boat was pretty empty, which made it seem like for a couple of hours we really did own our own schooner. However, a rep on the boat told us there are usually over 100-150 people, so expect to mingle.

The sails take off from Pier 17 at South Street Seaport, and if you are worried about overcrowding, get there a little early and check in on how many tickets have been sold the specific sail you're looking to go on. Click through for a look at the sail from last night, including the views you'll see along the way.

#manhattan by sail
#sailboats
#sam horine
#original
Do you know the scoop? Comment below or Send us a Tip